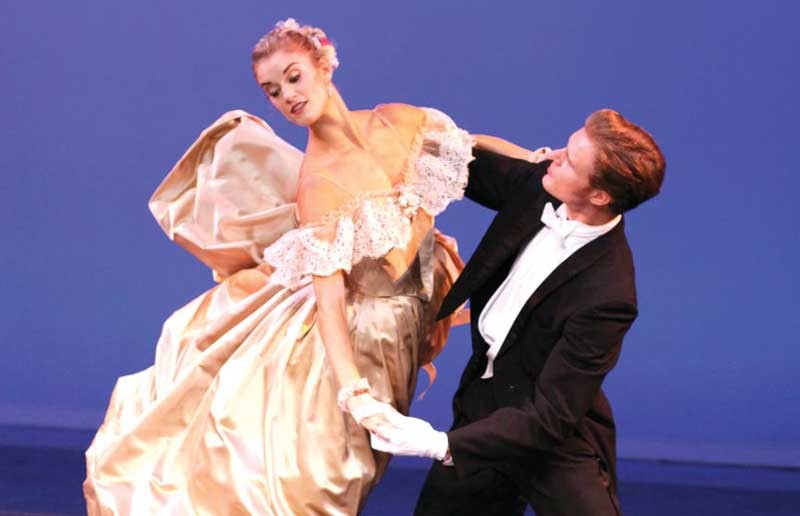 Mr. Spielberg and Mr. Day-Lewis, take note: You are not the only luminaries in town.

The Richmond Ballet has been playing host to two jewels in the New York City Ballet's crown — Karin von Aroldingen, a ballet master and former principal dancer, and Philip Neal, also a former principal dancer, now a teacher and for the George Balanchine Trust. They have been rehearsing a gorgeous Balanchine ballet titled "Liebeslieder Walzer" with Richmond Ballet dancers.

In the studio, against the set of a 19th-century ballroom with tall windows and gilt chairs, Richmond Ballet dancers work through Balanchine's rich, textured movement, the women in light tulle practice skirts and pointe shoes. The atmosphere, during a run of Act II, is quiet and focused. Neal and von Aroldingen watch intently, often echoing the dancers' movement by a lift of their arms, turn of their heads, as they confer and take notes to later share with the dancers.

"When I first saw it [in the early 1960s] ... I grew up waltzing ... I was stunned," says von Aroldingen. "Wonderful costumes, beautiful voices, four-handed piano. It was like a world of its own. Even if you didn't dance, you felt you were part of the whole thing. It was wonderful."

"Liebeslieder Walzer," performed by four couples, is divided into two acts and set to music by Johannes Brahms — piano and voice, which will be performed live. Balanchine once said that the dancers in Act I portray themselves; in Act II they portray their souls.

Balanchine's dances are passed down through dancers experienced in his roles, from body to body. Von Aroldingen was the first to restage "Liebeslieder Walzer" after Balanchine's death; this is Neal's first time. "I was wondering if the first day we just needed waltzing lessons, but we decided to just jump in," Neal says.

"We showed them the first steps," adds von Aroldingen. "And then we put the music on and danced for them."

"And they copy us, of course, to learn the steps," continues von Aroldingen. " Then all of [a] sudden, once they know what they're doing, they become themselves." To perform the piece successfully, she says, dancers must open themselves up to the music.

"With Balanchine, it was always music first," says Neal. "So, ["Liebeslieder Walzer"] is very organic and quite easy to perform if you just trust the work. You don't need to impose a story line or your personality on top of it. I think it comes from the inside out. It does take a little while, I think, to find yourself in the role. I think we both can agree that after years of dancing it, it only gets better."

Even restaging the ballet, says von Aroldingen, "you always see something new. [The dancers] have to experience it themselves; you have to give them the freedom. If you force it onto them, it never works." S

Richmond Ballet will perform George Balanchine's "Liebeslieder Walzer" on Nov. 10-20 at the Richmond Ballet Studio Theatre, 407 W. Canal St. Performances start at 6:30 p.m. except for Sunday, Nov. 13 at 2 p.m. and Sunday, Nov. 20 at 4 p.m. For tickets and information, go to richmondballet.com.