Seven years ago, the city was promised the Broad Street Community Development Authority was nearly fail-proof. Turns out it wasn't. 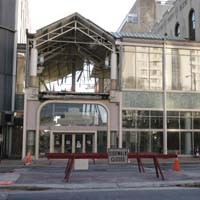 Free rides don't always come cheap. After seven years, the wizardry that is — or was — the Broad Street Community Development Authority is about to cost the city a lot more than originally promised.

The CDA was created to pay for $66.7 million in improvements to a 10-block area of downtown. City Hall now is gearing up to dissolve it, in no small part because of grossly inaccurate revenue projections that were sold to the public as conservative.

The funding mechanism is a tool that jurisdictions use to float bonds for projects off the city's books. In 2003, when the city created the CDA to issue bonds to pay for, among other things, utility improvements and to tear down 6th Street Marketplace, the project's backers promised the city was taking on little risk.

The city's only commitment was a moral obligation, an agreement that the city merely would consider kicking in up to $3 million a year to cover the $6 million in yearly debt payments if the authority's revenues ever came up short. It wasn't legally binding. It also was unlikely to ever happen, the city's economic development team advised, because the revenues were coming from stable sources: money from five parking decks, special real estate assessments and about $650,000 from the city — $400,000 from the Richmond Coliseum's budget and $250,000 for special events parking, or about $50 a parking space.

Now that moral obligation to which City Council agreed to make the deal fly is causing migraines in the finance department.

With the convention center, a new hotel in the former Miller & Rhoads building, the planned performing arts center and a new federal courthouse, the thinking was that filling the parking decks with cars would be a snap.

It wasn't. The slow-growth scenario for the five parking decks for fiscal 2009 projected that the authority would collect $5.7 million in parking fees. The actual number was $3.4 million. This year, the authority projects even less. The result: The city is being asked to kick in nearly $1.8 million to help the authority make its bond payments this year.

The future doesn't look any better.

“We don't see anything in 2011 that suggests that's going to change,” says Marcus Jones, deputy chief administrative officer for finance and administration. Jones says the CDA hasn't offered any new information to suggest $6 million a year parking revenues could become a reality.

So now Mayor Dwight Jones recommends that the city dismantle the authority and reissue its own bonds to pay off the existing debt — $66.3 million — and absorb the cost. The plan, considered one of the more ingenious aspects of the mayor's proposed budget, would save the city at least half a million a year, or as much as $1.3 million. It's largely been welcomed by City Council and appears headed for approval.

Few have mentioned that the city could, in theory, simply decide not to honor its moral obligation to pay the debt — the agreement isn't legally binding, after all — but Jim Duval, who manages the city's investment portfolio and debt, says the credit rating agencies wouldn't like that too much. Disowning its moral responsibility, he says, would damage the city's pristine bond rating and make it difficult to issue its own bonds in the future.

It's important to remember who isn't feeling the pain. Certainly not the bondholders, who receive 7.6 percent in interest — that's junk-bond territory and the high interest is supposed to reward high risk — or the master developer of the infrastructure improvements and the bond counsel, which together received more than $2 million in fees for piecing the deal together in 2003.

As for CenterStage, the owners of the new Hilton in the old Miller & Rhoads, the Marriott hotel and other property owners within the district, it also might mean they no longer have to pay the special assessment and fees that were part of the original bond issue. For fiscal 2009, CenterStage's bill came to $225,000, and the new Hilton's, $124,000. It's unclear whether the city can continue collecting the money if the authority is dismantled, Jones says.

What is clear are the consequences if the city doesn't take action. It's either keep paying as much as $3 million a year or dissolve the CDA, Duval says.

Or the city simply could turn its back on the authority altogether. That would be bad, Duval says: “We would feel the pain.”