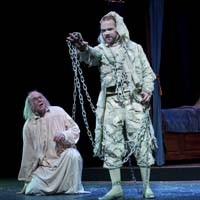 This is the year of “A Christmas Carol” in Richmond. At least four theater companies have planned some version of Charles Dickens classic story this season — an adaptation for seemingly every taste.  Randolph-Macon College in Ashland just completed its production, while Richmond Triangle Players offers the naughty “Scrooge in Rouge” and Richmond Shakespeare has the quirky “Christmas Carol for Two Actors.”

Then there is Theatre IV's production, which takes the prize for sentimental schmaltz. Chase Kniffen's adaptation, aligned with Jason Marks' original musical compositions, would appear to be a bit too slow for younger audiences and too treacly sweet for older ones. The effect is like watching a small cute animal struggle for its life.

The show opens and a bunch of big, complicated words tumble out of the actors' mouths, simply challenging little brains to think too much and shut down. Joe Inscoe's Scrooge seems too brittle, causing the audience to just dislike him rather than enjoy disliking him, which is key to the energy of the story.

As a result there is a flat audience reaction until the marvelously macabre David Janeski appears as the Ghost of Jacob Marley, sending a wave of frightful energy through the crowd. The next sign of life after several good performances of saccharine songs, (particularly notable: Eric Pasture's rendition of “Home Again”) is Fezziwig's party scene. Mark Persinger and Terri Moore tear up the stage as the jovial Mr. and Mrs. Fezziwig in a rowdy, mirthful number titled “Raise a Glass.” Ali Thibodeau also lights up the dark of this “Carol” as Belle.  Her speaking voice alone tinkles like a bell choir when she sings, “Look Inside Your Heart.”

Christmas sentimentalists will adore this play. The children that I talked to following the show also did. I guess I'm just feeling like Scrooge when I say “Bah humbug.” S

Theatre IV's “A Christmas Carol” runs on select dates through Dec. 20 at the Empire Theatre, 114 W. Broad St. For information go to www.theatreivrichmond.org or call 344-8040.