A bagel shop moves to fill the musical gap on West Grace Street. 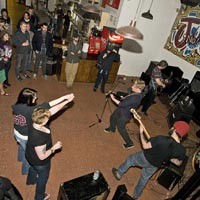 Missy Wernstrom had no idea the baggage she was getting when she opened Bagel Czar in the West Grace Street building that housed a succession of dingy rock venues since the '70s: names like the Back Door, Twisters, Nanci Raygun.

“Almost everybody I meet in Richmond at one time or another hung out here,” she says of the roughly 100-person venue, where artists from a young Bruce Springsteen to the Cows have performed. “I had no idea people were going to be so emotional about it.”

Older patrons would hardly recognize the place. It still has the long bar, a “Just Say No” graffiti mural on the wall and the window-front stage. But the big difference is the sunny, cafeteria-clean feel of the room. No longer does it seem like the kind of place where you need a Hazmat suit to venture into the bathroom.

With the economic recession likely to affect larger clubs in Richmond, the Bagel Czar is poised to pick up some slack along with other small venues such as the Camel, Nara Sushi, Rumors and Plaza Bowl at Southside Plaza.

Wernstrom recently applied for a beer license and has been ramping up a live music schedule since October, featuring everything from punk and hip-hop to folk and disco nights. The venue is simply called the Czar on MySpace (and its soon-to-be-completed Facebook page). Its biggest market: Nearby Virginia Commonwealth University students and Oregon Hill residents likely drawn by the $3 to $7 cover charges and convenient location.

Wernstrom, 44, is a Washington native who moved to Richmond from Charlottesville to teach in the city schools. She liked the kids but her dream was to open a bakery, and she was surprised to find the building at 929 W. Grace St. still available a year after Nanci Raygun closed. After dealing with some construction issues, the Bagel Czar opened in September. Wernstrom employs eight people at her store, mostly students, and says she wants the place to have a community feel.

VCU grad Landis Wine, a member of the shoegaze-experimental rock band Cinemasophia, is one of the three bookers for the club.

“Everyone is ready to be back here,” Wine says. “But we're trying to keep it fairly open to everyone and not shut any genre out.”

Bobby Pembleton, another booker, says the venue will schedule as many local bands as possible, but based on “quality rather than the band's ability to draw.”

Most of the shows will be for patrons 18 and older. Bands have to bring their own P.A. systems, but the organizers hope the club will be able to hang speakers and install a sound board in the future. They also want more mural art from community artists.

“We want the community to reinvest here,” Wine says. “And for bands, it's a good DIY spot where they don't have to pay any other expenses and can actually make some money.” S