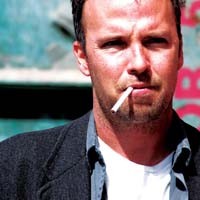 He's probably best known for Comedy Central's “The Man Show,” or for hosting installations of the pseudo-porn series, “Girls Gone Wild,” but stand-up comedian Doug Stanhope doesn't like doing television. It's too much work.

He prefers performing his gritty, politically incorrect stand-up comedy around the globe, which he's been doing since 1990. Whether musing about sex, drugs, politics or whatever happened to him recently, Stanhope smolders on stage both literally and figuratively, chain-smoking and drinking like the brooding bar fly with a penchant for cutting diatribes that leave you either howling or inching toward the door. He's released three CDs, three DVDs, has published a hilarious prank book about baiting pedophiles online, and has a Showtime special, “No Refunds,” from 2007.

Style Weekly spoke with him by phone from his home in the small border town of Bisbee, Ariz. With his gig at the Plaza Bowl set for Aug. 13 (which may be recorded as part of his next live CD), this will be the first time he's returned to Richmond since being blacklisted from national Funny Bone clubs.

Style: What was the deal with your banishment from Funny Bone?

Stanhope: I don't know if it was so much Funny Bone as a whole bunch of those guys being interconnected. It started in Tampa, [Fla.]. Anytime I'd work a Funny Bone or Improv I would trash them for being corporate franchise shitholes where I felt like I should be wearing a nametag. So they canceled shows. I guess they thought, “As long as he makes fun of us we're not gonna have him.”

Lenny Bruce is probably rolling over in his grave.

[Laughs] Comedy clubs don't have the same vibe of chaos where anything could happen. It just feels like, “Eat your chicken wings and two drinks and get the fuck outta here.” It's really awful that comedy is relegated to that kind of environment where people show up assuming you're gonna be a Jay Leno family-friendly act. … Some people have no idea who they're going to see, comedy is all one thing to them. They hear a bunch of fist-fuck and abortion material and fill out their comment cards like I'm the bad guy. You wouldn't say, “Hey, you wanna go see music?” and you show up and it's an evening of bagpipe music. Who's the dildo, the bagpipe player?

I saw the movie “Funny People” recently, and Judd Apatow plays up the clichAc of comedians having bad childhoods. Was that the case with you?

No, I had a great childhood. If there was a problem in my family it would be me. I was a rotten delinquent. But my parents were great. ... I was just always pretty funny in a very dark way. There were a lot of open-mics around when I started in the '90s. And it's almost impossible to quit now because it's the easiest fucking job in the world besides doing nothing. It spoiled me. I would never wanna do TV again for a living because that's a real job. You're working 14- to 16-hour days. To do a 22-minute television show, it took three months to do 22 episodes and what you're putting out is a watered-down, raped version of what you originally thought was funny. The money isn't even that good anymore. “The Man Show” paid a lot [$400,000]. Now I still have the shame but the money's gone.

Well, I've been doing it almost 20 years, so that's kind of like asking the guy who made Atari the best way to get into video games. I don't know … With comedy clubs, it's the only game in town. Like with Funny Bone, the guy who books decides whether you're funny, not an audience, not the people — that guy. Now with the Internet, you can do a set somewhere, film it, put on YouTube, Facebook, MySpace, invite people. If I wanted to add friends I'd go on advanced search and find people who say they don't want kids, who are atheists, who smoke and drink. They'll more than likely enjoy what I do. Once you've built that up, you can go anywhere and do a show — a bowling alley, a VFW hall and cut a door deal. You usurp the one-guy rule.

What's your process for coming up with new material?

Lately I start by praying. I get on my knees and pray to a God I don't believe exists for some new fucking idea. That's the only problem with doing it this long: Is there any subject left I haven't touched on? I feel like I'm ripping myself off.

So Andrew Dice Clay was a big influence on you early on?

When I first started out, that was the catalyst that got me to actually do it. I was working telemarketing in Vegas and the boss of the company had a band. I used to do Dice around the office, and he said, “Hey, you can open for my band with that.” I'm like, “That's someone else's stuff.” But just knowing I could've gotten a gig was enough to make me sit down and write in a notebook.

You have a reputation as a hard partier. Is that true?

Most of my partying is done onstage. I drink like a fish onstage. But I usually head home pretty early. I don't have the stamina anymore and there's really nothing to accomplish by going out. Like, I mean, “Do you have a new hole?”

I do very few drugs anymore. Doing these rock 'n' roll shows, most of the time I'm getting up at 6 the next morning to go to the next town. I can't do the drugs I like, like mushrooms. Can't get off stage at 11:30 and fry my balls off for six hours and be a decent comic the next night. Montreal last weekend was a nice vacation though. … It's a balance, even with drinking — the serotonin lows you get after a binge, you don't know why anything you ever said has ever been funny.

Do you feel pressure to be “on” all the time offstage?

When I'm home, I hang with my neighbors and talk about what kind of fence they put in. If the people who know me here ever saw me on the road, vomiting down the lanes of Plaza Bowl in Richmond … . It's almost like I have a secret life.

Do you think Bill Maher ripped off your drive to raise money for Bristol Palin's abortion?

I wouldn't be surprised if one of his writers did. I doubt Bill Maher is spending a lot of time at home on the Internet with a notebook. He's fucking black chicks.

With Bill Maher, I agree with the majority of things he says, and I hate him. He just comes across as so cunty, and smarmy, that curled up sarcasm … and too many guys on that side of the fence do that. That David Cross kind of delivery of, “I'm smarter than you,” not “We're smarter than them.”

Did the pro-lifers start hunting you?

The pro-lifers came after me by e-mail. It's a very nice, nonthreatening place to get death threats [laughs].

Social media is all the rage: Have you become a Twit yet?

I have an account and I don't know what to do with it. Every now and then when I'm drunk I put a one-liner in there. But I don't know what it's supposed to do. I think I hit the wall, like my parents did when they couldn't figure out voice mail. I think I hit my technology wall; I glass over immediately whenever someone tries to explain something. Yeah, I've reached my fill.

Is anything off-limits in your live show? I read where you made a handicapped kid in the audience cry once.

Yeah, a journalist had asked me if I ever regretted anything. You never want someone to feel bad, but sometimes you take chances and lose [laughs]. That was one of those times. I only draw the line at material that I think has a better-than-even-odd chance of immediate violence against my person. S

Doug Stanhope appears at the Plaza Bowl on Thursday, Aug. 13. Tickets are $18 in advance and $20 at the door.