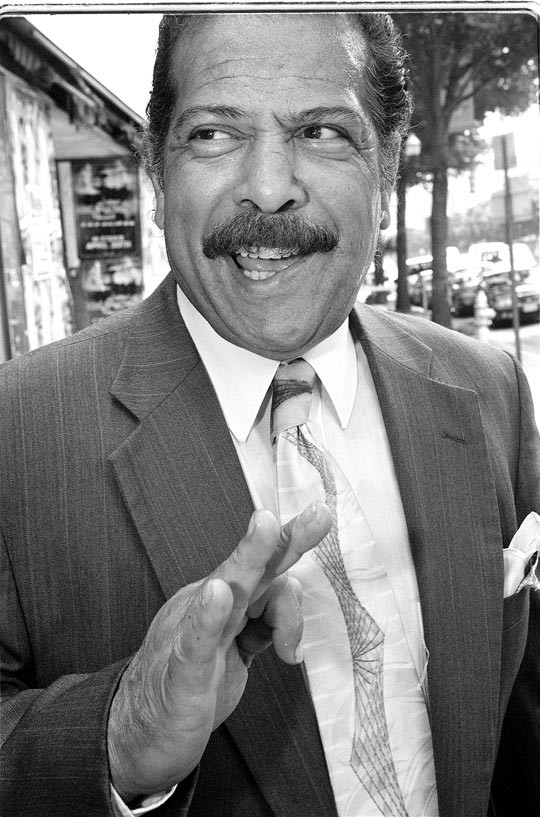 Former City Councilman Chuck Richardson was a public servant who once even chased a purse-snatcher who dared to cross late civic leader Nina Abadly. Richardson also broke Richmond's heart on multiple occasions. A fiery orator who was beloved in his 5th District during the 1980s and early 1990s, the demons — specifically, a drug addiction he picked up in Vietnam — caught up with him in 1995 when he was arrested for heroin distribution. He resigned his seat, but re-emerged periodically in futile comeback attempts. He even got caught up in a police raid on a night when Style reporter Brandon Walters was riding along for a story.

Richardson to the Rescue

"Just like greased lightning" is the way Nina Abady describes Councilman Henry Richardson's recent six-block chase after a thief. "Chuck was driving past when he saw that kid take my purse. He slammed on the brakes, jumped out of the car and took off after him."

Richardson and Michael Ziglar, who also gave chase, were able to recover the purse minus an undisclosed amount of cash, but the youth escaped capture after telling his pursuers he had a gun.

Abady, executive director of the Virginia Opera Association, has known the councilman since 1966 when he was a Virginia Union freshman enrolled in a sociology course she was teaching. "He was always a delightful student, but I never knew he was that kind of an athlete," she reports. — D.W. Murphy

Chuck Richardson was a popular city councilman, but he apparently isn't very popular at the Richmond City Jail.

The former councilman got into a recent scuffle with other inmates over control of their television.

"Many of the inmates don't like him," says a sheriff's department source. "He creates disturbances."

The jailhouse altercation began when Richardson and other inmates were watching a football game. Richardson got up and changed the channel, apparently enraging some of his fellow inmates.

A slapping match ensued, but no one was hurt. ... — Greg Weatherford

The New Face of the ABC

Richardson is home with his wife. He's playing pool when police knock.

He's told of the warrant and he's cooperative. He leads the officers around to the back, saying the door to his son's apartment is unlocked. It isn't. He offers to get keys but police refuse. [Richmond Police Sgt. Anthony] Franklin and his team of "breachers" ram the door, shattering it.

"God damn, God damn," Richardson mutters softly. He paces for a moment then stops to watch.

"Police! Search warrant!" the officers exclaim, entering one-by-one and disappearing inside. A basement window has been boarded over. Three large exhaust pipes stem from the patio and rest on the back of a blanketed air-conditioning unit. Dressed in a black T-shirt and black jeans, his hair in a ponytail, Richardson gazes on, noticeably upset.

With the door open, the smell of marijuana permeates the air instantly. Inside the basement the FADE officers discover what they thought they would: 45 marijuana plants ranging in size from several inches to several feet. They also find a small amount of crack cocaine.

Sgt. Franklin explains to Richardson that the warrant is for the entire residence and officers are going to take a quick look upstairs.

"No Jesus, not the whole house," Richardson says to him. Franklin shakes his head from side to side. "He's got a stash somewhere," he says to the officers out back, adding: "You guys find it." — Brandon Walters