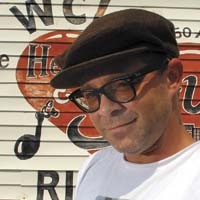 He's the canary in Richmond's cultural mine-shaft. A barometer, the smoking gun of the scene. Chris Bopst is that guy in the background of all the pictures of historical events -- Declaration of Independence, man walking on the moon, Karl Rove rapping.

At least, that's what it seems like. Wherever there's been a cultural shift in the last 20 years or so, Bopst has been there. Sometimes he's even been in the foreground.

At 41, with a wife and new daughter, he's growing up, and appears to be taking the city with him. Follow the thread here:

In the mid-'80s he was in VCU's sculpture program, the same time it was becoming the best of its kind in the nation. Then he got in with a bunch of art guys who dressed like gargoyles and played with GWAR for a few years in the late-'80s. For better or worse, that band represents this city, and there he was, adding to our strange association with pretend musical monsters, until he decided to go his own way.

"I had my own artistic vision that didn't include penises," he says.

Then he, Ed Trask, Fred German and others at the Vim Gallery — an artist collective on Broad Street — had shows many Fridays before there was a First Fridays (fighting the city all the way).

Bopst became a radio DJ in 2002 at WVNZ, then moved "The Bopst Show" to WCLM, where it is today. And where his endless knowledge of music can mar the minds of people with a radio or Internet service.

There are few in Richmond who have introduced us to so much random music, either dressed as a beast onstage or sounding like one over the radio. Or by booking terrific and eclectic little shows at his other job at Millie's. Oh, and he's adding sports commentary to the resume with "More On Sports." "It'll keep me on my toes not to have music, but to actually talk," he says. "It'll keep it interesting."