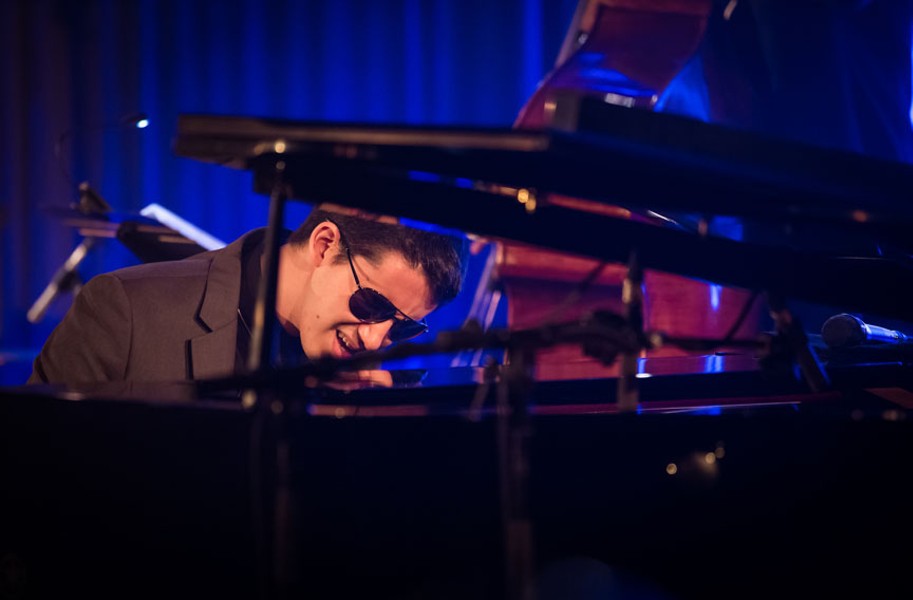 Blind from the age of 11, pianist Justin Kauflin's musical life is a literal, nonstop lightshow. A synesthete, he experiences sound as color, a symphony of hues produced in the sight center of his brain that are effortless, rich and subjectively as real as normal vision.

"In my head are colors and textures that only I experience," Kauflin says. "And I end up being influenced by the visual landscape I see." Because he lost his sight relatively late, he has the chromatic vocabulary to describe his sensations.

Take the acoustic title track of his new album, for example: "The instruments all have their own color scheme. The piano ranges from bright white to a duller gray. The guitar I see between yellow, red, and light brown, with a silvery sheen on top. The electric bass is superdark blue, almost black. The drums are kaleidoscopic, multicolored."

Every key has its own palette. One downside is that his favorite, C sharp minor, is a difficult key for jazz improvisation. "I've written songs in it because I love the way it looks," Kauflin says. "It's a dark blue-green, like the color deeper in the ocean. But it's not a great key for blowing, so I end up shifting it down to C minor, which doesn't have the same vibrancy. Still blue, but much more boring."

All the colors in the world wouldn't matter if he didn't know how to work with them. Kauflin is both a masterful player and a composer with a strong lyrical affinity reminiscent of the early work of Keith Jarrett and Pat Metheny. "For me the song takes precedence," Kauflin says. "The foundation has to be strong. You don't remember a piece for improvisational acrobatics. It is more the melody and a chord structure that carries through, elevating everything on top."

Born in suburban Maryland and raised in Virginia Beach, Kauflin's prodigious talent was recognized and nurtured by a series of mentors. He started his career at 15, playing with Tidewater drummer and NPR jazz host Jae Sinnett's trio. After graduating as valedictorian from Governor's School for the Performing Arts, he won a presidential scholarship to William Patterson University, where he studied with Mulgrew Miller, James Williams, and most notably Clark Terry. His relationship with Terry, one of the giants of 20th century jazz, was the subject of the award-winning documentary "Keep on Keeping on." Through Terry, Kauflin met his current champion, legendary producer Quincy Jones.

Jones co-produced "Coming Home" with a light touch. "He was great for seeing the overall picture. He made small suggestions, but they were integral to the tracks coming together," Kauflin says. The other producer, Robert Glasper bassist Derrick Hodge, was much more hands-on. "There were moments when Derrick was in the piano room when I was playing, coming up with ideas." The recording has the energy of a live performance, with a few background textures and overdubs adding a subtle bit of studio magic.

The choice of collaborators is key. "Music is very revealing," Kauflin says. "Ninety to 95 percent of the time when I hear a person play, how they interact, I know whether they are someone I would like to be around." Two of the sidemen, guitarist Alan Parker [Matthew E. White, Natalie Prass] and drummer Corey Fonville [Butcher Brown, Christian Scott] are familiar to local audiences. "I met Alan a few years ago," Kauflin says, "and I grew up with Corey. I met him when he was 11 or 12 and subbing in for Billy Williams at a gig."

The original plan was to have both Fonville and Williams on the record, but the scheduling didn't work. The situation is reversed for his upcoming JamInc-sponsored Halloween gig at Tin Pan, where Kauflin's longtime drummer Williams will be on drums, along with Parker and "Coming Home" bassist Chris Smith. It's a strong lineup, but the objective is not mere musical spectacle.

"I am not a fan of watching someone be excellent for a couple of hours," Kauflin says. "My goal with every performance is for people to have a good time. I want to be engaging, to take them on an emotional journey, and leave them happy. I would rather have someone say they had the best time rather than 'you were great.'"