Break dancing is alive and well, and ready to leave it all on the floor at the Folk Fest. 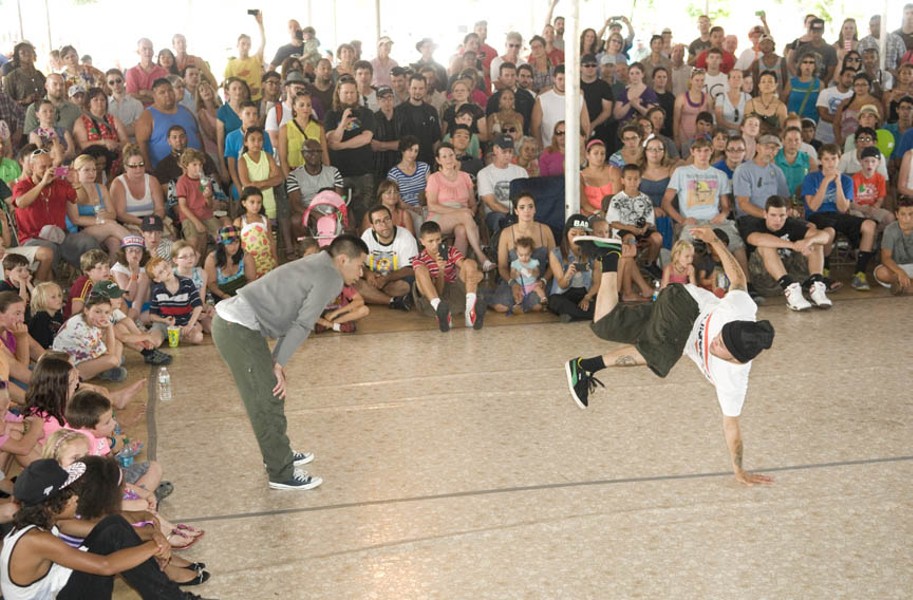 If you think break dancing is still out of style, you haven't been paying attention. It's in commercials, films ("You Got Served," "Planet B-Boy") reality shows ("Break'n Reality," "America's Best Dance Crew.") and international dance competition. There was lull in the movement in the late '80s and early '90s, because of media saturation and a class of new-school rappers who were too cool for footwork.

"It was sort of little bit of dark age," says Anthony Demarco, a Web developer who also teaches break dancing. "Then in the late '90s, it suddenly started to revive itself, and it never slowed down. It's so big right now that I get requests almost daily from parents — 'Teach my kid!'"

Demarco, 35, will serve as host of Throwdown on Brown, a two-day break-dance competition at the Richmond Folk Festival. He says the battle concept developed after considering how exhausting performances are for his crew and to accommodate the limited attention span of modern audiences. Festival organizers liked the idea.

"I presented an adaptation for them, in the style of battle, which basically gives people a chance to win money, come represent, get on stage, do their thing," he says. "And it allows people in the audience to get an up-close glimpse of what usually only happens in places where they aren't."

There will be competitions on Saturday and Sunday. Winners will be chosen for first, second and third places while they compete for bragging rights and cash. Since the contest will determine two first-place winners, and the cash won't be doled out until Sunday, it's possible the two first-place winners will find themselves onstage together, with a score to settle. "The element of surprise is always clutch," Demarco says.

The contest is being judged by veteran B-boys and dancers Xcel, Bombi and Kid Freeze, with Richmond turntablists DJ Mordecai and DJ Sayeed providing the beats. In-between the breaking, there will presentations on other parts of hip-hop culture, such as turntablism and popping, another form of street dance. Demarco adds that he's ordered a couple of hundred trucker hats, a B-boy staple, that he will tag for kids after the show.

"I know what's it's like to be that kid on the sideline," he says. "And to be too afraid to jump out in the middle of everybody."

The battle is part of this year's Urban Traditions theme, which includes a return performance of Trouble Funk, ("Drop the Bomb," "Pump Me Up") and Native American rapper Supaman. Also on the bill is beat boxer Shodekeh and jazz and go-go band, Lafayette Gilchrist and the New Volcanoes.