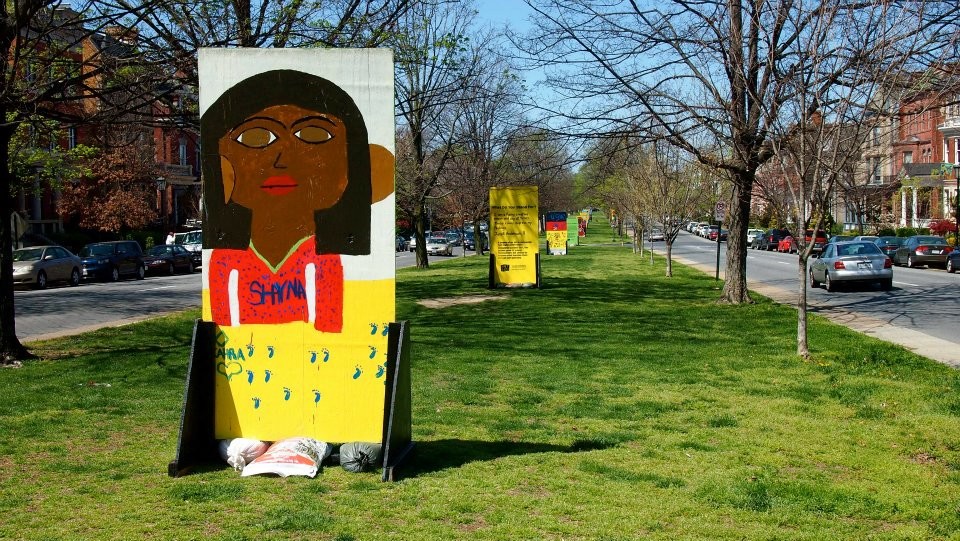 It didn’t take long for the Monument Avenue boo birds to come out. Just days after Art 180’s roving exhibit, entitled “What Do You Stand For,” made its way to the Grand Avenue on March 26, the nonprofit’s executive director was getting calls from the city’s Department of Public Works.

The 8-foot-tall displays had to come down.

“I’ve heard everything: it’s killing the grass, they are culturally inappropriate for Monument, they are advertising,” says Marlene Paul, co-founder and executive director of Art 180. “And there is apparently some gray area where these could be interpreted as ‘signs.’”

At this point, it’s not so much the nature of the art work -- there’s one piece that features a woman's body, wrapped in what appears to be a rainbow, but otherwise it’s fairly tame -- but more about, well, timing and location.

Despite being granted the permit by the city March 19, Paul says she was informed Thursday that it was a mistake. “We were told that we had until Friday, April 6,” she says. “The motivation clearly seemed to be there to get them out of there before the Easter Parade.”

There are 31 pieces in the exhibit, 25 of which are the work of fifth- and sixth-graders in the city. Originally, Paul says the group was granted a permit to display the art work until early May. Art 180 also received the blessing of the Monument Avenue Preservation Society in September, Paul says.

Tammy Hawley, press secretary to Mayor Dwight Jones, says in a statement that the Jones administration wasn’t aware that the Department of Public Works had revoked the permit until Saturday evening. Chief Administrative Officer “Byron Marshall has the matter under review and is expecting to have a resolution by tomorrow,” Hawley says in the statement.

City Councilman Charles Samuels, whose district includes Monument Avenue, says in a statement this afternoon that he’s concerned about the artwork conflicting with the Easter Parade next Sunday.

“It appears that there were crossed wires within the Administration regarding the permitting procedure as they considered the timing of this art installation and any overlap with next weekend's Easter on Parade, which uses the same medians that feature the art displays for vendors, children's activities, and foot traffic,” Samuels says in an email. “I want to avoid having any of these great displays lost, damaged, or overlooked while this event is going on.”

Paul says that won’t be a problem. Art 180 has agreed to move any of the exhibits that would be an obstruction during the Easter Parade. And the group appears to be gaining support, with residents along the avenue already asking about displaying the art work in their front yards if the city revokes the permit later this week.

“I feel like the window is still open until Friday,” Paul says. “And there are lots and lots of folks that are up in arms about this decision.”

And, of course, all of the commotion has made the artwork a bit more valuable -- in a sense. One of Art 180’s goals is to help children in “challenging situations” find their voices, Paul says. “They experience personal change … just by virtue of their voices being heard,” Paul explains. “And they are being heard -- for sure.”