Attack of the Mummies

With "Secrets of the Tomb," VMFA unwraps the legends. 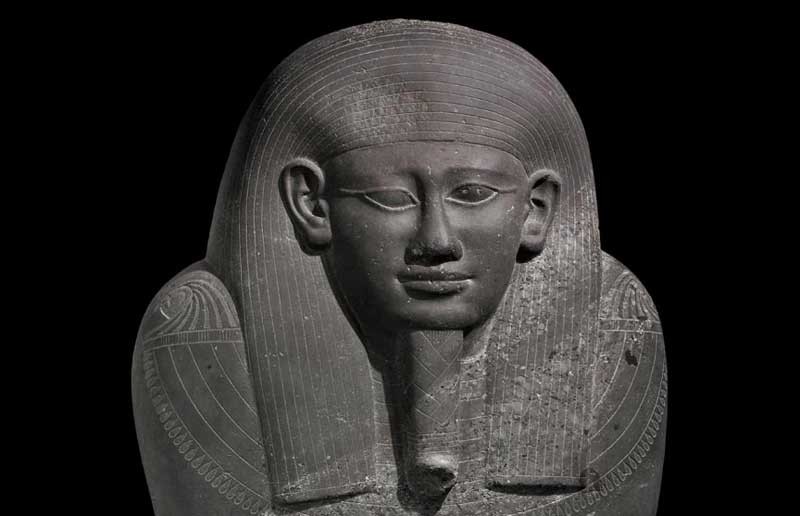 For 3,000 years the mistakes made by the ancient Egyptians while preparing bodies for mummification were well-kept secrets. Those days are over. The Virginia Museum of Fine Arts' "Mummy: Secrets of the Tomb" includes a spectacular 3-D movie that virtually unwraps the mummy of the temple priest Nesperennub, using the most advanced CT scans available.

"They never realized that the British Museum and modern technology would discover the real secrets of the tomb," says Suzanne Hall, the museum's chief communications officer. The museum is the only venue in North America to present this exhibition from the renowned British Museum.

During the movie, viewers travel through the mummy's body, learning new information about the intricacies of Nesperennub's health, mummification and the funeral practices of the day. The mummy itself remains on display, still safely sealed in his exquisitely painted case of fiber, called a cartonnage. "We can be absolutely sure that whatever is in there has not been touched by human hand or eye for 3,000 years," says John H. Taylor, a curator of the exhibit and the assistant keeper in the Department of Ancient Egypt and Sudan at the British Museum. "It's quite rare."

Another true rarity is the clay bowl affixed to Nesperennub's head. Was it placed there to collect extra resin while it dripped during the embalming process? Whatever the reason, the resin hardened and stuck the bowl firmly to his skull. It was clearly inadvertent as evidenced by the rips in the scalp from an unsuccessful struggle to get it off. In the end, they just wrapped him up and called it good.

Taylor, fresh off a plane from England, surveys the exhibit while crews work to complete the final installations a few days before the opening. His passion for ancient Egypt started when he was about 8. "I think a lot of Egyptologists say that it's something that grabs you as a child," he says. "And once it has that hold, it's incredibly powerful. I suppose originally for me, it was something about the art. This is ... a precise way of creating an image. They put all their resources into creating a perfect thing."

Another mummification mishap is apparent with the mummy Padiamenet. The foot of his case is unpainted and elongated. X-rays reveal a secret: "They couldn't fit him into the case," Taylor says. "So they shoved him in and they seem to have broken his head off in the process, because his head has been joined to his body with a piece of wood. You tend to imagine all of this is being done in a reverential atmosphere, but once the priest has gone home and the technicians are working ... well, you know."

A particularly rare mummy also honors the exhibit. Tjayasetimu was a young temple singer thought to have died around the age of 12. Her cartonnage is nearly black with old resin, but her face is gilded in gold like that of a divine being. One arm rests, unbound, beneath her breasts, and the other lies by her side, as if she were still alive. Her feet also are free from the usual mummy wrappings, complete with delicate little toes. Only one other mummy of this kind is known to exist. Taylor finds her unusual coffin most intriguing, she says: "It's a very poignant thing, of course, because we know she died very young and obviously whoever buried her felt she deserved the best possible sendoff."

More than 100 funerary objects are in the 7,000-square-foot exhibit, including statues, a papyrus scroll from the "Book of the Dead," a mummified cat and two massive sarcophagus lids weighing more than a ton. For ancient Egyptians, getting to the netherworld and navigating eternity was a complex process requiring a combination of objects, magic spells and sacred knowledge.

"There's that interesting duality," Taylor says. "On the one hand you get this impression of confidence and that they had the answers. But what's driving that is huge fear. Because when you read all the hieroglyphic text, they're full of very frightening images. You can be attacked by all kinds of monsters. Gigantic snakes, crocodiles. The gods can punish you. ... They can hack your head off or burn you. So a lot of this stuff is about escaping horrible fates."

Nesperennub may yet have secrets even a CT scan won't reveal. In place of his heart, thought to hold the mind and memories, is an amulet with a spell to keep it quiet while the gods evaluate his life. Whether or not it worked, at least he has a 3,000-year start on his goal of achieving immortality. "They believed that if their names were still being pronounced, they were still alive," Taylor says. "So whenever we mention Nesperennub, we are keeping him alive. We are doing what he wanted, in a sense. OK, so he didn't know he would end up in Virginia, but then, he didn't know Virginia existed."

"Mummy: Secrets of the Tomb" runs through March 11 at the Virginia Museum of Fine Arts, 200 N. Boulevard. Tickets are $12-$15. For information go to vmfa.state.va.us/exhibitions/mummy. S