Attack of the Cat-Faced Liquor Thieves 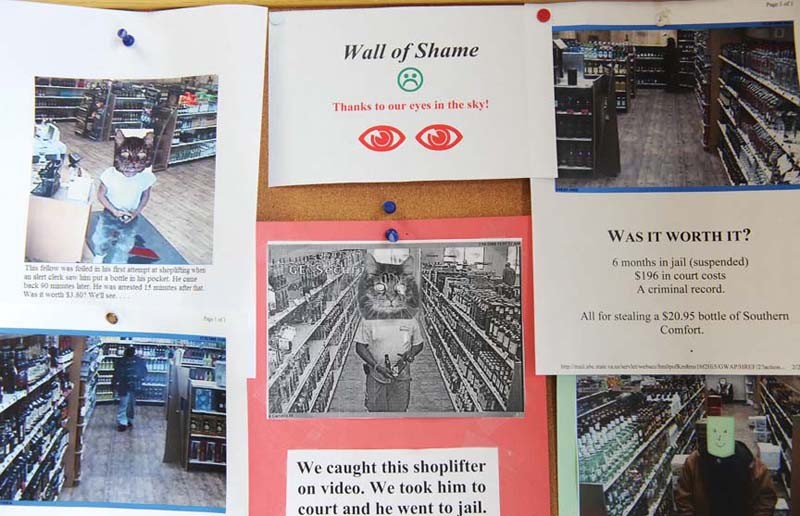 What do you do if you’re bored, thirsty and broke?

In Richmond, you shoplift E&J Brandy — a decidedly down-market drink.

That’s the brand of liquor shoplifted most frequently from city liquor stores in the last 12 months. In general, light-fingered drinkers prefer vodka, and not the cheap stuff: Absolut and Grey Goose were grabbed most often. The fanciest brands stolen were Patron tequila and Chambord raspberry liqueur.

But Richmonders don’t steal much booze, all things considered — or perhaps they just don’t get caught. From May 2010 to May 2011, the Virginia Department of Alcoholic Beverage Control recorded 98 shoplifting busts in the city of Richmond, of merchandise totaling $2,576.60. Nearly half of those thefts were from a single store, at 3100 W. Broad St. Most thefts were single bottles, ABC spokeswoman Kathleen Shaw says.

The ABC prosecutes shoplifters if it can catch them, Shaw says. But employees’ safety comes first, she says: “We don’t ask that they put themselves at risk.”

If you’re a liquor thief, think twice before hitting the ABC store at the Parham One Shopping Center in Henrico County. You might end up with whiskers. Manager Girard Bowe has established a wall of shame of video surveillance photos of convicted shoplifters. He obscures their faces with pictures of his cat — and in one instance, a Santa Claus beard.

The warning works, Bowe writes via email: “The wall of shame has been up about two years, and I believe it’s had a positive effect on our inventory results.”

Whether you’re taking an airplane bottle or a specialty 30-year Canadian Club ($179), as long as it’s worth less than $200 it’s classified as petit larceny, a class-one misdemeanor. A conviction carries a maximum sentence of 12 months and a fine of as much as $2,500.

As Bowe’s wall says, “It would have been cheaper to pay for them.”