Richmond filmmaker Rick Alverson’s “The Mountain” is his most daring work yet. 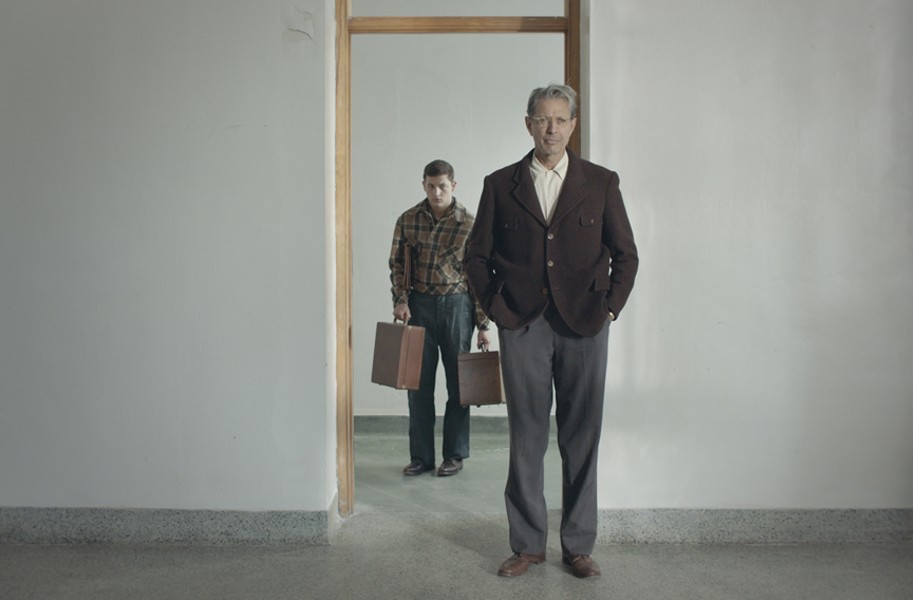 The films of Richmond-based director Rick Alverson are split between potentially contradictory poles of ambition. They want to be felt, but not by the conventional means of pop culture, particularly television and mainstream cinema, which offer catharses via stories of trials weathered and usually transcended.

Alverson's films, which include "The Comedy," "Entertainment" and now "The Mountain," are self-consciously slow and obstinate on the surface, which leaves room for moments of observation and insight to bloom. He splinters plots so that we may experience individual moments on a sort of atomic level.

In the director's intense, fragmentary stylization, there's earnestness — an authentic desire to render the emotional dimensions of characters via surfaces, an ambition that is itself almost contradictory. In this fashion, Alverson appears to be inspired by such austere legends as Robert Bresson and Bela Tarr. And "The Mountain," Alverson's most ambitious film yet, contains some of the filmmaker's most extraordinarily moving scenes, which drift out of an aura of detached misery so unexpected as to feel miraculous.

"The Mountain" is set throughout 1950s America. Andy (Tye Sheridan) wonders about his unseen mother, who is said to have mental problems. The young man lives with his father (Udo Kier), who teaches figure skating and speaks to Andy in cryptically passive-aggressive riddles that suggest that he resents his son for resembling his wife. These early scenes are deliberately, poignantly stilted, as Alverson fashions painstakingly beautiful yet rigid tableaux that affirm Andy's estrangement and yearning. Correspondingly, Sheridan dials his charisma way down, suggesting a deeply submerged soul.

As in Alverson's other films, the pregnant, formalist tension of "The Mountain" occasionally explodes via surreal flourishes. When Andy's father dies, he is mourned by his figure skaters, who skate around a portrait of the man in a quasi-Busby Berkeley formation. Briefly, we see Andy playing cards in a room with other employees of the skating rink, one of whom is played by cult icon Larry Fessenden. A conventional director might've allowed the audience to enjoy the solace such moments offer Andy, but Alverson reduces the scene to a few gestures, suggesting the fleetingness of the comfort. In this room is also a kind of den of pinup pictures, which excites in Andy a late-blooming carnality.

Which is to say that Andy is ripe for a father figure to help him broker a passage between the roles of child and man, and Wallace (Jeff Goldblum) arrives on cue. Andy and Wallace's first scene together is heartbreakingly beautiful, as Wallace appears standing in the rain outside of Andy's garage, as Andy attempts to hold a yard sale of his father's possessions. The contrast of the rain and the garage, framed exquisitely, suggest the ongoing quest for communion that drives Alverson's work. Later, a similar image affirms this idea, when Wallace stands in a room while Andy lingers back behind him, a doorway separating them. They could be posing for a picture in a series called American Ennui and Disconnection.

Wallace is a doctor who performs lobotomies and shock therapy, which Andy begins to photograph, and which Alverson films discreetly yet mercilessly, contrasting the suffering of the patients with the clinical precision of Wallace's gestures. Wallace, hauntingly, is not a cynic — he appears at least initially to believe in rituals that are now seen as barbaric, and Alverson's refusal to judge him is as admirably unwavering as the filmmaker's acceptance of the devoutly unpleasant comedian of "Entertainment."

Goldblum's personality and star power animate Alverson's depressive mood, sometimes even turbo-charging it. Yet Goldblum, in an astonishing performance, also tamps himself down, allowing us to feel, as Sheridan does, a suppression of personality. Unlike Andy, Wallace has outlets though, as he's an alcoholic and a womanizer. We see little sex, though one image irrationally suggests both the pleasure and the emptiness of Wallace's carousing: A young woman sits in Wallace's lap as they both laugh and almost mechanically touch one another. The most sexual scene in this film isn't literally about sex though: when Wallace dances with a woman in a bowling alley, in the middle of an aisle, taking solace wherever he can find it.

At times, the master-mentor-American mythology gamesmanship of "The Mountain" is reminiscent of Paul Thomas Anderson's "The Master," which was similarly willing to resist traditional plotting in order to follow its lost characters into primordial emotional ether. To put it lightly, Wallace is not a traditional mentor, and he gradually drifts out of the film. "The Mountain" is eventually commandeered by Jack (Denis Lavant), whose daughter, Susan (Hannah Gross), offers Andy a moment of pleasure before she is lobotomized. Jack stops the film purposefully dead in its tracks to offer a wrenching inquiry into artistic representation, which arises as Alverson's biggest dare to the audience.

Wallace's addiction to the curative mythology of lobotomy is paralleled with our addiction to the narcotic comforts of traditional narrative, which offers us closure by the yard. Such closure, such pacifying, is for Alverson an insidious form of mental violation.

"The Mountain" will screen at the Byrd Theatre on Sunday, Sept.8, at 7:15 p.m. with director Rick Alverson in attendance. $5.