For public radio's new ensemble in residence, anything's worth a try. 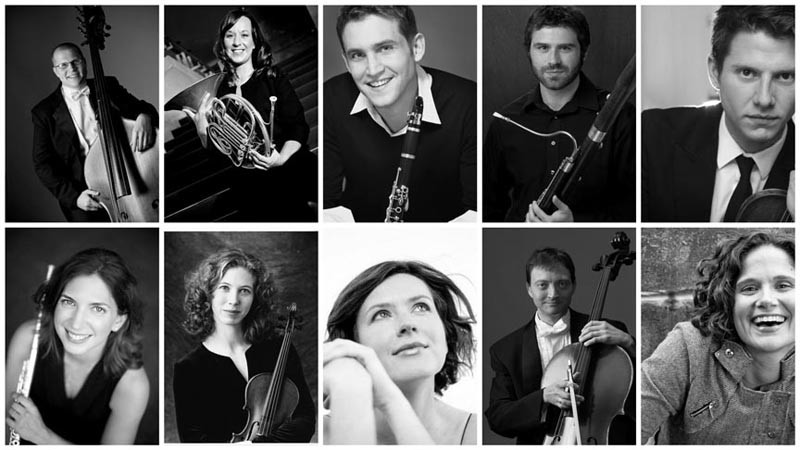 The violinists are debating the difference between “gimmick” and “shtick.” OK, not debating. Call it a lively discussion. Besides, they agree: There will be no clowns.

Ross Monroe Winter and Susanna Klein are classical violinists, employed by the Richmond Symphony and Virginia Commonwealth University, respectively. They're also part of the 11-member Atlantic Chamber Ensemble, an independent collective of professional musicians in a performance world dominated by reverential sobriety.

The group's first public appearance, on Sept. 26, is billed as a concert in three acts, and Winter is coy about what that means, exactly.

"We want to put on things that don't feel like concerts," he says before a recent rehearsal. "There will be a little theater involved. ... We're doing things with lighting." At rehearsal, a lighting tech runs through some possibilities for a Shostakovich string quartet. The musicians agree on a design that looks, as bassoonist Martin Gordon says, like Shostakovich "died and didn't exactly get into heaven."

The printed programs also will be different. The ensemble is soliciting listeners' memories evoked by Samuel Barber's "Summer Music," and will print them in the program, Visit acensemble.org/#!summer to listen to clips and to comment.

"This is not about being crazy," Klein says. "It's about not having preset rules" for what a concert experience should be.

The musicians "believe music shouldn't be held up above listeners' heads," says Bobbie Barajas, classical music host for public radio station WCVE-FM. Instead, they want to share their love of music in a "you gotta try this" kind of way.

For at least nine months, the ensemble will be in residence for WCVE. Musicians will give on-air performances (the first is Sept. 21), perhaps present studio concerts for station members and simply be available to talk on-air about music.

Barajas says having a resident ensemble is "a very prestigious kind of thing" for WCVE. It's distinctly uncommon for a radio station to have such a long-term arrangement.

The situation is perhaps helped because the musicians aren't being paid for their residency. "Working for free, you can do anything," Klein says. That is, you can play in nontraditional spaces — Winter mentions Ashland Coffee and Tea and the Children's Museum of Richmond; you can choose music that you love, whether or not it attracts an audience; you can use special lighting and other gimmicks.

"No, I think a gimmick is all right," Winter counters. "Shtick is what we don't want."

"You see," Klein says, "classical music has taken itself out of this discussion entirely." S

The Atlantic Chamber Ensemble will perform Martinu, Barber and Shostakovich on Sept. 26 at 8 p.m. in the Singleton Performing Arts Center at Virginia Commonwealth University. Tickets are $5. For information go to acensemble.org.