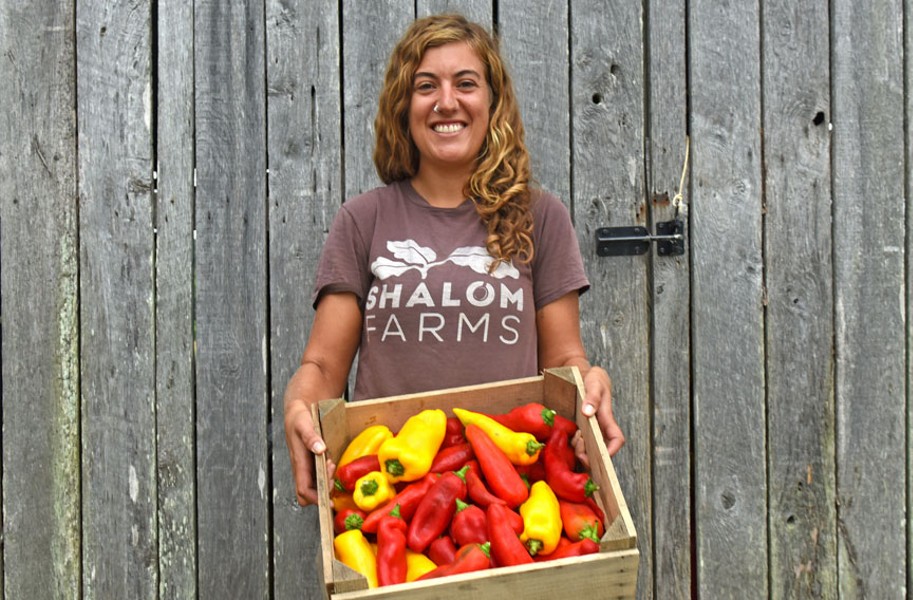 Down an inconspicuous one-lane road just over the Powhatan County line sits a rectangular tract of land, flush with the sounds and smells of the growing season. It’s a warm and pleasant day in mid-August, and a dozen elementary-age children from a local day camp are unloading from a white bus, shouting and dancing in identical rainbow shirts. In the distance, rows of tomatoes, green beans and cantaloupes stand waiting to be harvested. This is Shalom Farms, and some of the kids here today are getting their first look at how the food they eat is grown.

Shalom — the name is Hebrew for peace or wholeness — is a nonprofit farm project whose mission is to provide fresh, affordable produce to marginalized communities in the Richmond area. The neighborhoods may be food deserts or concentrated areas of poverty — places where gas station candy bars and fast food are a more common sight than a ripe tomato. Launched in 2008 as a project of the United Methodist Urban Ministries of Richmond, Shalom has since grown to provide much-needed, nutritious food to these underserved communities through distribution partnerships with FeedMore and after-school snack programs. It also has its own mobile pop-up markets. 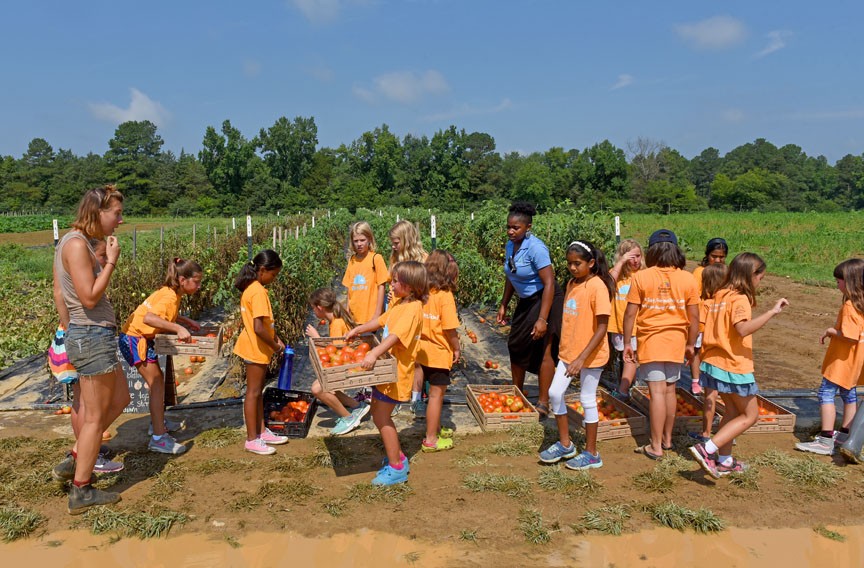 The kids are herded by Shalom’s volunteer and education coordinator, Hannah Wittwer, into a fenced-in classroom area. She’s giving them a crash course in food production. Wittwer starts by asking them about their favorite fruits and vegetables — a topic that elicits a variety of opinions. Apples, oranges, salad — all good things from grocery stores. But what, Wittwer asks, would happen if you didn’t have a car to get there? There’s a thoughtful silence against the background whoosh of traffic from nearby Route 288. This is, perhaps, a fact that the children hadn’t considered. And that’s the lead-in for the mission today: Their job will be to harvest produce for people in the city who can’t get it on their own. It’s a simple introduction to a problem that affects many in the Richmond area.

The day-camp kids are ready to pick tomatoes — a relatively simple crop for young hands to harvest. They march down a muddy road to the heart of the farm. “We want to make sure they’re thinking of the broader issues,” Shalom executive director Dominic Barrett says, “and thinking about the way we’re trying to grow food out here before we put them to work to plant, weed, spread compost, mulch — whatever it takes that day.”

This is Shalom’s first growing season at the location, but it’s hardly obvious. The spot is full of hoop houses and greenhouses for seeding plants, an experimental garden, a sorting barn and a volunteer pavilion. There’s even an unused silo — a vestige from its previous incarnation as a livestock farm. Barrett emphasizes that this newly leased land is a big upgrade from the old digs. 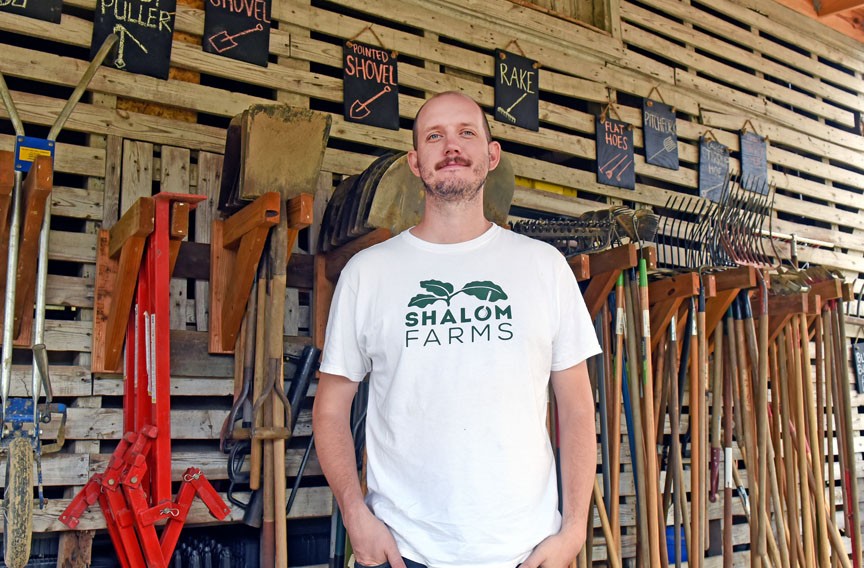 As indie folk music drifts up from the sorting floor below, where farm volunteers prepare produce for the loading dock out back, he says, “We loved our old farm, but it was 50 minutes west of town. It was also limited in the amount of space we had to grow there and didn’t have the kind of infrastructure and resources, like this barn and the office that we’re in right now.”

Since the move, the farm has doubled its production. And its new accessibility means that it has seen a 50 percent increase in volunteer and educational visits, Barrett says. Shalom should eventually triple its output, with options to expand its footprint even more.

Those volunteer numbers are a crucial part of the farm’s continued success, and they run to the tune of 6,000 to 8,000 pairs of hands per year. Some of them are children involved in summer-vacation activities or with church groups, while others are part of corporate team-building exercises. All of the groups get some version of the lesson of “How do you get to the grocery store?”

Since the farm has only three full-time staff members, the entire operation depends on donated time, from sprout to stand. That makes Shalom one place in central Virginia where it’s entirely possible that the fresh food some communities so desperately need is harvested by their neighbors. 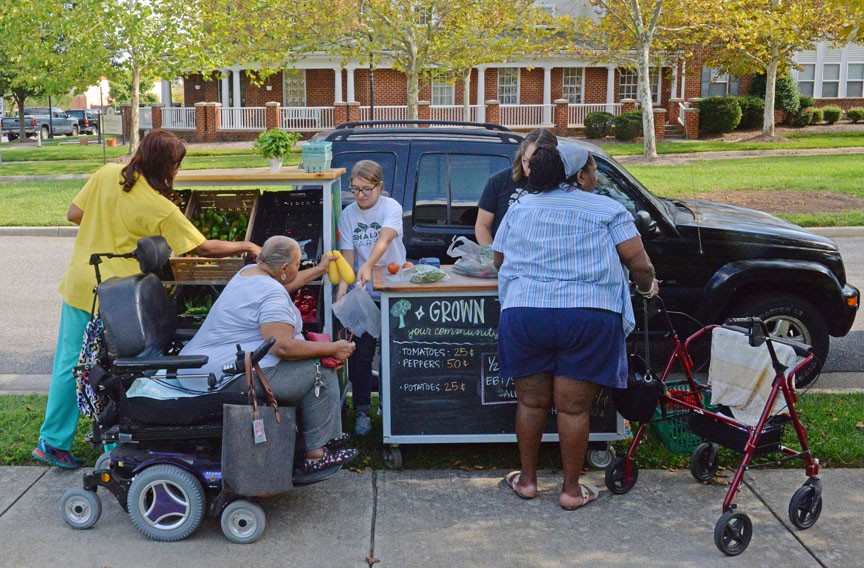 A few weeks later, at the Winchester Green Apartments on Jefferson Davis Highway, Lillie Robinson walks down the sidewalk to her home, a bag of produce in tow. This is one of Shalom Farm’s Grown to Go mobile distribution points — and it’s in one of Richmond’s poorest neighborhoods. Just outside, a Shalom truck, two volunteers set up a produce stand, and apartment residents, mostly older people, are starting to line up. Just yards away, practically in the apartment parking lot, stands a Bojangle’s Chicken ‘n’ Biscuits, its drive-thru filling up with rush-hour customers.

Today, Robinson bought a tomato and a bag of green beans — costing only a dollar and change — to eat for the week. She has access to a car, but says the weekly market is good for the residents who don’t. “We don’t have any stores around this area who sell fresh vegetables,” she says. “We have everything else — but not fresh vegetables.”

The neighborhood’s nearest grocery store is almost 2 1/2 miles away. That’s a seven -minute journey by car, but an hour-and-a-half round-trip walk along one of Richmond’s busiest traffic corridors. Not a great prospect for many of the older people who live at Winchester Green.

“You can’t walk there, you can’t bike there. We’re right off of Jeff Davis, which is not a very safe street to be walking on,” says K.C. Whitsett, one of the volunteers selling produce for Shalom today. “So, bringing the produce in to where the people are is really important to us because it makes it easy for them to get it.” 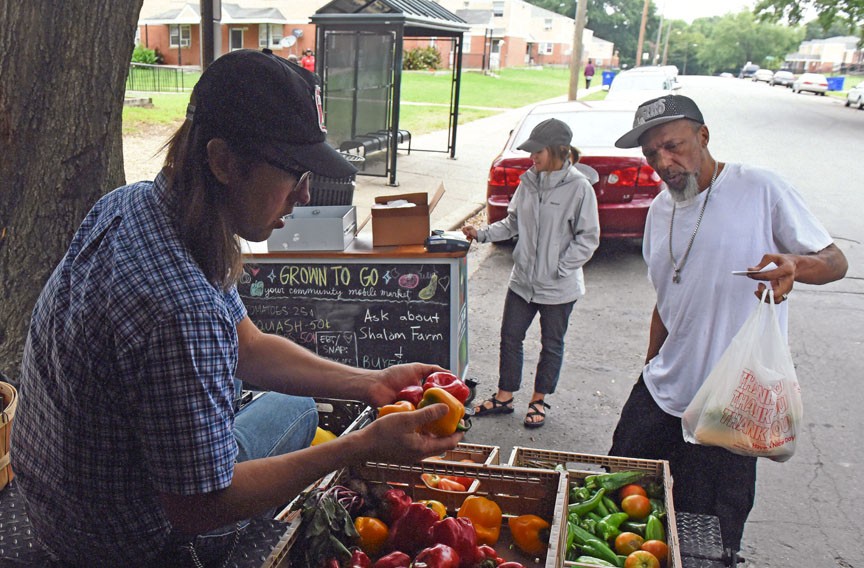 By far, the most popular items of the summer have been watermelons. It’s just past the growing season, and Shalom is all sold out today, but Whitsett says the staff tries to break it to the customers gently. “People are used to seeing things always available in the grocery store, but that’s not reality when you’re growing your own food,” she says.

Nearby, a neighbor gets a hug as she buys a bag of vegetables for a friend. The market atmosphere is starting to pick up. Whitsett says this is a slower day, but it’s only her third visit to Winchester Green. “It’s been really amazing to see how much food can bring people together and how much people love to see beautiful, fresh produce,” she says. “When people walk by the stand, their eyes will just light up.”

The mobile markets have been operating for almost two years now, setting up shop here on Jeff Davis and in Richmond’s public housing communities. Shalom has narrowed down these pop-ups to 10 stops, sweet spots of access and demand.

"Ninety percent of Shalom Farms' produce goes straight to our own programs, including the Mobile Market, Healthy Corner Store Initiative, Prescription Produce Plan, and Kitchen Clinics, as well as 16 nutrition distribution partners including FeedMore. The remaining 10 percent is sold for earned income to places such as Ellwood Thompsons," Barrett says.

The farm accepts Supplemental Nutrition Assistance Program funds with an additional discount on its already lower-than-store prices. And in some cases, the mobile market draws in people who need medical care as well. One site coordinates with a Bon Secours health van. “Their doctors are actually providing little $3 vouchers to clients they see on a weekly basis who they think could use a little extra fresh produce,” Barrett says. 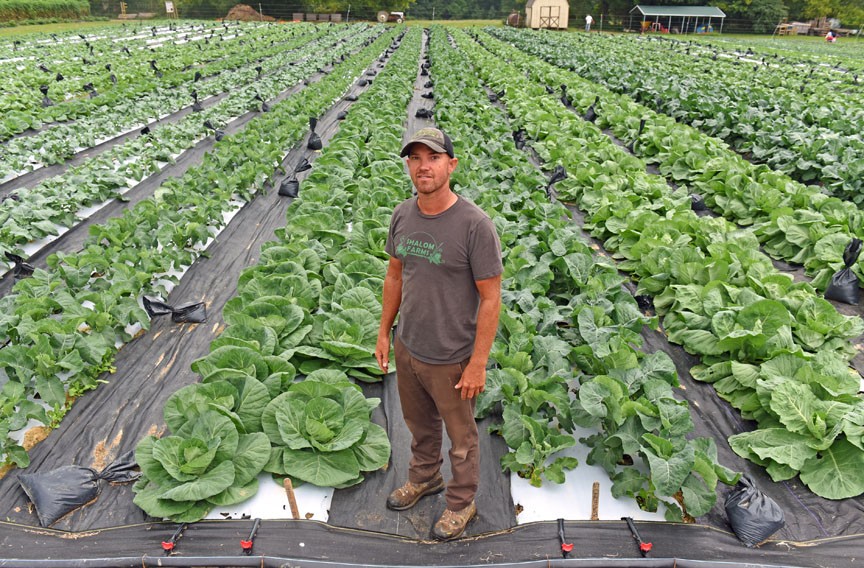 Shalom faces its share of challenges, but its story has been one of growth. Beyond the farm, of course, there are the usual issues with nonprofit funding. Its 2016 annual report reflects a variety of sources, including private donations and grants. That’s Barrett’s area of expertise. “It should be noted that on my business card it says, ‘executive director/office farmer,’ so I’m not a farmer or a good grower by any means,” he says. Barrett worked for several nonprofit organizations prior to his job with Shalom.

“You want to make sure at the end of the day most of your time is spent doing good work and not trying to just be creative about how to find that next dollar,” Barrett says. “I think that’s a balance we’ve historically struck well, but it’s one you have to think about each day.”

Then there are the challenges that any farm faces: pest and weed management, climate change, and soil rotation. Shalom is an organic farm with an eye on sustainable practices, which adds another layer of complication, especially in a relatively small-scale operation. 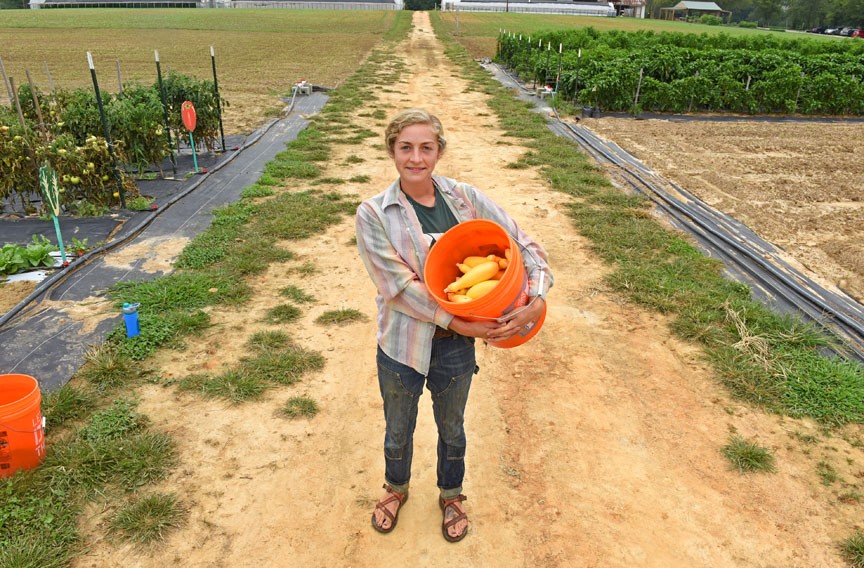 Compounding this, Barrett says, is the volunteer work force — a crucial lifeline, but a challenge to manage. “What we don’t want to do is give people busywork,” he says, “nor do we want to give people a job that needs to be done but they’re not necessarily trained enough to do.”

And the final piece of the puzzle is the way in which the farm distributes its produce. Shalom must balance maximizing its crops with providing a good product to its mobile customers and other distribution partners.

“I’m amazed every day at the generosity, ingenuity and commitment of our volunteers, but also the creativity and thought that our staff puts into this,” Barrett says. 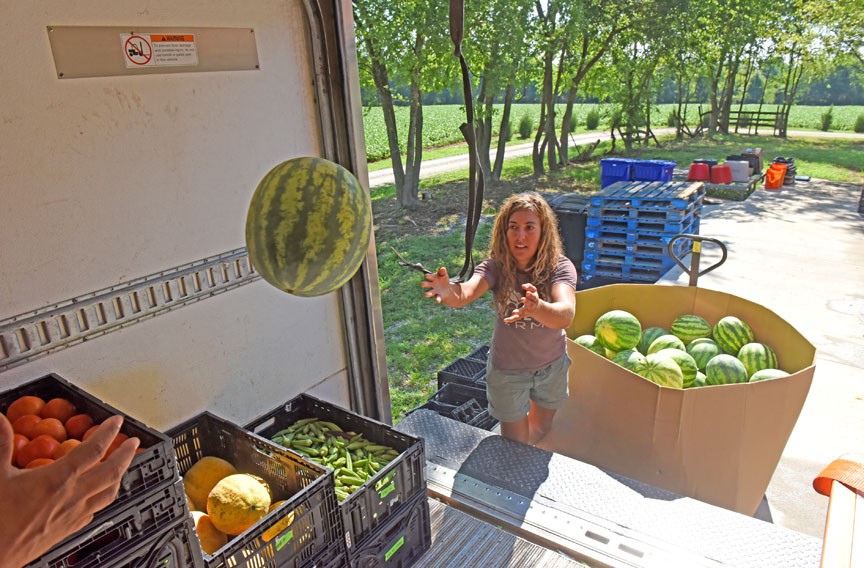 On the horizon is a second location for Shalom — a big urban farm project on Richmond’s North Side. Barrett says it will be the largest farm of its kind in Virginia once it’s up and running. It will provide a strength to Shalom’s portfolio — accessibility, for both volunteers and customers.

“Even though we’re a lot closer and more convenient now, we’re still not accessible to many folks in the city,” he says. “So, by being right in the heart of the city on the North Side, we’re really excited about what that will allow us to do both from an educational standpoint and from our produce standpoint.”

Barrett’s also organizing the first big gala fundraiser in October, Savor Shalom. “We’re having five or six of the best chefs in town out here for a really nice event to celebrate on the farm, with food from the farm, to support the farm,” he says. The event showcases culinary luminaries from some of Richmond’s most beloved restaurants: Southbound, the Roosevelt, Heritage, Dutch & Co. and Nota Bene. 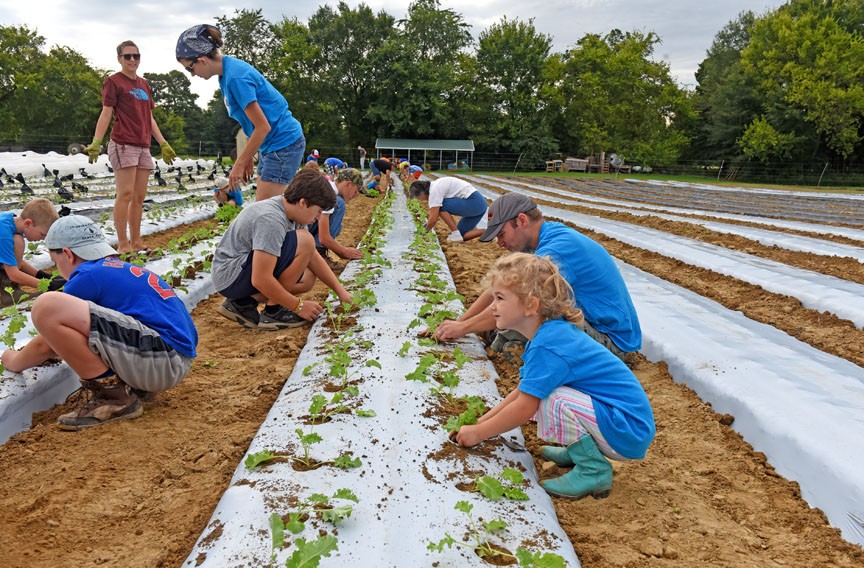 The fundraiser is another step in Shalom’s mission to connect people with their food and to get them thinking about the ways in which fresh fruits and vegetables fit within the larger issues of supply, demand, poverty and access.

“We know, with all the barriers that so many of our communities face — in a city like Richmond, and the day and age in which we live — we need to recognize that we’re just one part of this very complicated puzzle, which is solving poverty in a very thoughtful, empowering and dignifying way,” Barrett says. “We really love the work that we’re doing, but realize we’re just a small piece of it, so we enjoy plugging in with others that are doing really critical work. Healthy food is just one part of that.” S

Editor's Note: A previous version of this story stated that Shalom Farms' previous location was 15 minutes away from Richmond. The actual distance was 50 minutes away. The story has been updated to reflect this.