At Kroger, The Ukrop’s Brand is Back — in a Big Way 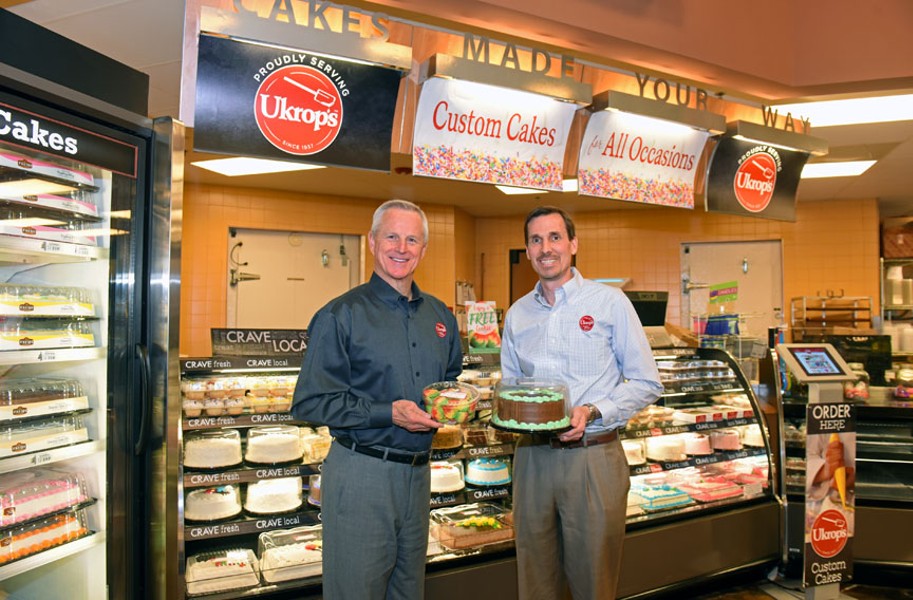 I ran into Bobby Ukrop the other day. He was by himself and had decided to check out the Carytown Kroger store after the launch of the Ukrop’s Homestyle Foods brand that morning in Midlothian. He also was introducing himself to the Kroger staff. There was a little confusion.

“I’m the original Ukrop,” he eventually said to the woman behind the bakery counter.

“You mean you’re the oldest?” she said.

“Not exactly,” he said, smiling.

I was there after work looking at the new displays, too — and buying some chicken salad — after talking to Ukrop and his son-in-law Scott Aronson by phone earlier in the day. Our meeting in the store was a surprise for both of us, and I was struck by the personal attention he gave to his business despite a long day of talking with media.

With the impending closure of all the Martin’s stores, Kroger has aggressively launched the Ukrop’s Homestyle Foods brand, the line of prepared foods from the company that Ukrop started when the family grocery chain closed.

You’ll now see individual, standing displays throughout the fresh food section of Kroger and big banners hanging from the ceiling. Even the grocery bags tout the Kroger-sponsored Ukrop’s Monument Avenue 10-K — with the Ukrop’s logo even bigger than the sponsor’s.

For Richmonders, it’s an unexpected salvation of some of the things we loved best about the former chain: rainbow cookies, white house rolls, potato salad and, most important, birthday cakes that became a tradition for at least a generation. All in all, 180 products will be available.

Style: How did the partnership with Kroger come about?

Ukrop: When we sold our retail company seven years ago, Kroger came knocking on [Ukrop’s Homestyle Foods’] door and asked if we’d be interested in selling them food. We were not in a position to sell them Ukrop’s branded food at that time. [The company had an exclusive deal with Martin’s.] So, we started talking about what we could do — we started selling them products under a different label called Good Meadow Homemades.

In the beginning, was this just a few products?

We started more in sandwiches, green salads — we added some bakery items … and expanded into entrees and sides over a period of time.

Why is Kroger expanding the line now?

Well, I would say this: For the last four or five years, Kroger as a company is expanding its involvement with fresh foods across the country. They asked us if we would make food for them for their mid-Atlantic division. They have people like us doing this all across the country in different divisions. … It’s local, it’s fresh, and it’s made consistently every day — we do six-day-a-week delivery. We’ve been making chilled prepared foods for 28 years, so it’s not new to us. The Ahold-Delhaize merger and its divestitures really created the opportunity here in this market for our brand to be sold more widely. … Kroger had its own brand called Fresh Food Market and they’re switching all of that — except for the soups — to the Ukrop’s brand.

How much have you had to ramp up to increase the line for the Kroger stores?

Well, Martin’s has closed four stores in the last few weeks. So, it’s not like it’s all new business [for us]. We’re replacing business we already had.

Are the products just going to be in Richmond stores?

The program is going to be rolled out. There are Ukrop’s products across Kroger’s mid-Atlantic stores. In Richmond, all of the items were converted last week. In other stores, some have been converted and others will be under Good Meadow and Fresh Food Market [labels].

What’s been the biggest challenge for you and your company since the Ukrop’s chain closed?

[Before] we had total control. You can argue [the fresh foods division] was a little like being a grandparent — you’re an influencer, but you had no authority. The reality is now we’re working to encourage people to carry our product. What we’ve learned — a lot of research has been done — is that people will go to other stores if they carry Ukrop’s products. That’s been very humbling and that’s been very gratifying — people want that food. S