At Home With: Doug Curtler 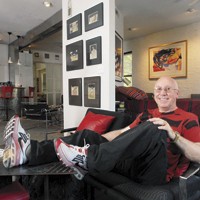 This building is one of the oldest in the Fan. This two-story front part was originally a stable. Horses and carriages downstairs, servants' quarters upstairs. I got the building about 27, 28 years ago. It was empty, leaking, not quite abandoned but pretty close to it. This spot had a salacious use. You came upstairs, and there was a bar and three bedrooms and lots of shag carpet. And silver wallpaper with red, fuzzy fleur-de-lis flocking. Dropped ceiling painted red. Recessed light bulbs painted red, very red.

I got my color scheme from in the bathroom. Someone designed a piece for me [the toilet seat] in red. And I asked why red? And she said that it's because there was so much red in the [Greig Leach] artwork. And then I found I could get little bits of red and move your eye around again to try to stretch the space out. I put red everywhere on the outside [of the room] to try to make you feel like the space was actually bigger than it really is.

A lot of Greig Leach's works are restaurant scenes, because for years he supported himself by being a bartender. He worked catty-corner across the street bartending. And then he said, "I'm an artist," and I said, "Well, let me see your work." And then I just loved it, and I said, "How would you like to have a show right across the street at our place?" and he said sure. I also have paintings from Jack Lawrence. He's a hyper-realist painter, and what I like about his paintings is that each one tells a story visually.

In the beginning the front part of the salon was a gallery. I featured my friends' artwork and had openings every month. But I realized that being a gallery owner was becoming more of a hobby and the salon was becoming more lucrative. I think the reason Visions looked so different is that I didn't know what a hair salon was supposed to look like. It really was a gallery that became a hair salon. So there's lots and lots of art.