Is Barack Obama a commie? Are the tea baggers right about him? Good question for an actual red-card-carrying art student at VCU. 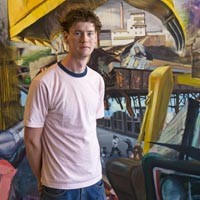 If Obama were a socialist, no one would be happier than Jeff Lassahn. The timing would be sooo perfect. Socialists could seize control of the big automakers and the financial houses. And the workers, the millions of homeowners and factory employees, could get their share of the gazillion-dollar bonuses and bailouts.

But Lassahn, president of the Virginia Commonwealth University chapter of the International Students for Social Equality and self-described socialist, shrugs off the right-wing talk-show hosts and tea-party participants who say Obama is just that — a Marx-loving, America-hating socialist.

An art student, Lassahn, 22, first became interested in socialism as a junior in high school, just as the Iraq war started. He found himself intrigued by the left wing of the socialist movement led by the late Leon Trotsky, who, among other things, clashed with Lenin and pushed for a social revolution led by the working classes.

He gave a lecture last week on campus outlining the failure of American capitalism — is the current economic meltdown not proof enough? — and discounting the foolish notion of Obama, the proletarian.

Lassahn: It's absurd that they're calling him that. As to the question of whether he's a socialist? It requires a tremendous ignorance of history and just a lack of real political analysis. His policies in no way reflect anything to do with socialism. There's a really crude grab to take supposed state intervention and equate it to socialism. The concept that state intervention is socialism comes from European social democracy, from social reformism, but it's not at all actual Marxist socialism, in that workers actually take control of production, have a democratic right to participate in it. Right now all we are doing is paying for everything.

To a certain extent, [the International Society of Social Equality agrees] with the hostility toward bailouts, because there is this looting of the public treasury. The state having marginal control of the banking system, especially compared to other historical events, financial collapses in other countries — it's not that significant. It's still run by the very same people. None of the financiers, the bankers, have been taken out of their positions. They are still there. They have not had their pay rescinded. There's no restrictions on their activities. They are really just getting free loot. That's really, actually, the opposite of socialism. It's socialism for the rich. Their profits get subsidized and living conditions of ordinary people are what suffer.

Style: Socialism for the rich?

That's even a point that's admitted by many mainstream commentators. Most serious political analysts that in no way identify with socialism would say it's patently absurd to call Obama a socialist. And there's the simple fact of who he is himself. This is a man who from his start seemed very cognizant that if he was to have a political career in the United States he could not associate with anything left wing or questionable.

Early on, with the whole Ayers connection, he was tagged as a socialist. Did you have hope then that perhaps he was?

No, because our look into him even as a politician began even before he was running for president, when he was a senator. The Ayers incident … his policies were already established. To just say anything within the Democratic Party could be socialist, there is no precedent for that.

Why has being left-wing morphed into being a supporter of socialism in the broader sense?

In terms of the leadership of the Republican Party, and ruling circles in general who support their policies, there's an element of desperation. I mean they did lose substantially in this election and they are struggling to provide any sort of policies that are going to attract masses of people. They are resorting to demagoguery, they are resorting to cheap populism, and they are exploiting what is a lot of confusion and hostility to what's going on. There is no question that millions of people in this country disagree with bailouts, disagree with the problems of ordinary of life, and it's being taken in a right-wing direction, right-wing populism. There's a history of that in this country, too, as well. … McCarthy, of course, is another figure that comes to mind. They're exploiting the name to slander him, and just try to pull up base, emotional reactions.

What's the difference between socialism and communism?

If you read Marx or Engels, or even Lenin or Trotsky, communism is a stage after socialism. It's a stage where there is no class anymore, there is no state, in fact. There is no overall government that is in people's lives. It is very much in the distant future. Even Marx would say once there is a socialist revolution there's decades of work to get towards that level. The confusion comes because Stalinism, Stalin's control of the Soviet Union, he rapidly tried to cover over his own betrayals and crimes by exploiting the heritage of the Russian Revolution. Suddenly, the Soviet Union not only achieved socialism, but it achieved communism in the span of a couple of years, essentially abusing the word to try and gain political capital out of it. And then from there, all sorts of regimes around the world — China, Cuba, Vietnam — used communism as a word to enhance their prestige, even North Korea.

There was never any actual communism?

In many cases not even close. … As for the Communist Party of the United States, when Stalin consolidated power in the late 1920s, one of the biggest things he did was eliminate what's called the left opposition of Leon Trotsky. Around the world he tried to purge all the communist parties of genuine Marxism. A lot of the violence he carried out in the Soviet Union, the purges of the late 1930s, like 1937, were actually against left-wing opposition to his regime, not restoration of capitalism. So all of the communist parties worldwide that had been set up from 1918 through the 1920s became instruments of Soviet foreign policy. All their measures and policies were just reflections of what the Soviet Union wanted. Since then, the Communist Party in the United States just became a widely hated and despised organization, even before WWII. It's really disappeared. There's been no Communist Party of importance in this country since that period.

What would you have said to the tea- party participants complaining that Obama is taking this country in a socialist direction?

First thing I'd say is that if you are angry and opposed to the amount of money going to Wall Street, I can understand that impression and feeling. But if you take a serious examination of Obama and his policies in the Democratic Party, by international standards actually a very right-wing party of capitalism, they are not even a left-wing party in the general sense of the term. Obama himself is a multimillionaire. You'd have to wonder how he could redistribute wealth. He stands to be taxed by his own very, very marginal tax increase, which doesn't even put the tax increase up to the Clinton years, and Clinton had reduced them from Reagan. I would hope to raise some historical issues and try to explain what socialism actually is. It's fine to criticize socialism, just know what it is. I think the greatest misconception is to identify Stalinism, what happened with the Soviet Union, with [real socialism].

If Obama were a socialist, what signs would you look for?

When he makes an economic policy, he wouldn't have a roomful of 12 bankers to determine it. He would presumably have real working people involved in his decision-making. Also, he would have to lead a party that has some representation of the pressing needs of the [lives] of ordinary people. S

Correction: In earlier print and online versions, we misidentified the International Students for Social Equality.