Officials from Ashland fuse politics, bluegrass at the National. 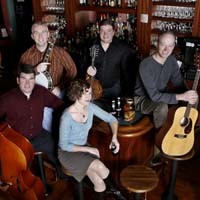 Nobody charms snakes like professional politicians, but it's rare to see them work their magic on stage.

The God Fearin' Snake Handlers, a three-year-old Ashland band made up largely of members of the local political pool, will do just that on Friday at the National.

Self-described as “baroque funk bluegrass,” the band counts among its five members the Ashland town manager, one town councilman and an administrator for the town's public works department. And members seem plenty aware that their group's name is anything but politically correct in a town that's within spittin' distance of a Pentecostal campground.

“It's intended in a good-natured fashion,” guitarist Ned Henson says of the name. Henson's in his first term on council, and calls it “fair” to say he's already handled his share of snakes as an elected leader — though “I'm not really a politician, I'm just a person who ran for Town Council.”

As steeped in politics as the members may be, there's nothing political about its music. When Ashland Town Manager Charles Hartgrove (mandolin and lead vocals) first got a few friends together to pick and grin, the sound and the tunes relied heavily on his southwest Virginia roots.

But as the group evolved, other sounds began to emerge — spooky, unexpected ghosts of a more recent musical past — such as Huey Lewis and the News and Prince and the Revolution.

The latter's “1999” has become a crowd favorite, says Jenny Valent (lead vocals and ukulele) who represents the public works department.

“It's one of those songs when we start playing it people won't recognize it, but then when they hear the words they start singing along,” says Valent, who coincidentally used to work at Ashland's AM radio station back when it was owned by an area Pentecostal group. She, too, says the group's name has no connection.

“I've never handled a snake in that regard,” she says. “Though I once owned a snake — and our guitar player Ned currently owns a snake that he's named Fluffy.”

The God Fearin' Snake Handlers top a bill that includes five other local acts Sept. 4 at the National. Show time is 6:30 p.m., and tickets are $10 in advance, $13 at the door.