As the Shift from the Theater to the Sofa Continues, a Film Critic Looks at the Best of 2017

You didn't see some of the best movies this year in theaters. No one did. Or almost no one.

Movies like "Okja," about a new form of food with a mind of its own, the 1940s farming saga "Mudbound" and "The Meyerowitz Stories," Noah Baumbach's spiritual follow up to "The Squid and the Whale" (notably all from Netflix) are among the year's best and most noteworthy films. They screened in some theaters as special events, but most people can watch them only from the couch.

That goes double, or maybe doppel-gänger, for "Twin Peaks: the Return," as it was called when it aired on Showtime.

"The Return" unfurled over 16 or so weeks — the first four parts aired the same night, if you had the stamina. Essentially an ambitiously long, made-for-TV art soap (Is that a genre? Is a film in a museum still a film?), "The Return" is a follow up to the spinoff feature from 1992, "Fire Walk with Me," which has been aging very well — even once ardent fans might have forgotten that David Bowie is in it.

"The Return" goes in a similar direction, which can seem purposefully aimless, referencing itself, other films and TV shows amid detours into stories that spring up without warning and leave with even less explanation.

It's constructed with TV cliches: Soaps, cop shows and teen melodramas all get their due. The New York Review of Books also devoted a recent feature to the show's staggering number of film references. It is something unique, not completely aligning with either movies or TV, or perhaps showing where they cross. The result is funny, mesmerizing and mind-boggling, and also something unlikely to happen again anytime soon.

Movies meant for theatrical release were comparatively tame, but not without exceptional standouts. 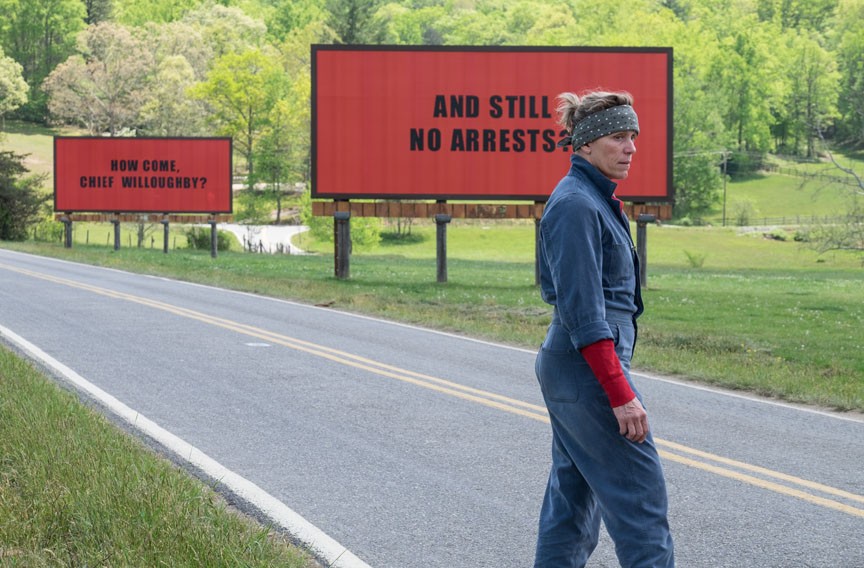 Paul Thomas Anderson staged a film, for the first time since "Hard Eight" and parts of "The Master," somewhere away from California, all the way in London. The result, "Phantom Thread," is vintage Anderson nonetheless: a character-driven, comic psycho-drama featuring a battle of wills between a fashion designer to royalty (Daniel Day-Lewis) and a waitress (Vicky Krieps). If "Phantom Thread" upends the male-female relationship dynamic, "Three Billboards Outside Ebbing, Missouri" is notable exception to the white male saga. This white female saga offers a tough Frances McDormand as a mother angry at local law enforcement (Woody Harrelson and Sam Rockwell) over the unsolved murder of her teen daughter. During a year marked by senseless violence, writer and director Martin McDonagh explores small-town American strife with just the right touch of cynical gallows humor.

A similar sensibility hangs with "Good Time," entertaining as its name suggests, but with social critique sneaking around here and there. The frenetic crime drama follows low-level miscreants trying to evade the law (Robert Pattinson and Buddy Duress), resulting in one of those stupid-criminals stories come to life. Fleshing out these characters also humanizes them, however, making every other laugh slightly painful.
Complex emotional responses were a leitmotif of the year, and nowhere more complex than in "Call Me by Your Name," written by James Ivory and directed by Luca Guadagnino. The romantic drama is best described as a slow drift from wonderfully arrogant youth to the sudden and unanticipated gut punch of experience. Set at a northern Italian villa in a summer so beautiful, the canvas lulls character and audience alike into thinking everything will be fine.

That everything will not be fine is taken to the extreme by "Blade Runner 2049." Ridley Scott handed his 1982 baby over to director Denis Villeneuve ("Arrival") and, aside from a little too much Harrison Ford, the result was stunning and true to the original's dour spirit. It depicts a believable if not inevitable future wasteland where compassion, selflessness and even affection are as scarce and endangered as natural resources.

It would be a perfect double feature with Darren Aronofsky's "Mother," a fever dream of the interior and the allegorical. That somewhat pretentious nature may have caused a few to overlook the technique, which is almost too much to take. After the end, on the big screen with big theater sound, you stumble out like you've been too long on a raging sea in too small a boat.

Technique is similarly important to "Dunkirk," even at the expense of story and emotional impact. After the dust settles you realize all that equipment and things flying and the people waiting for rescue, all up close and huge on an Imax screen, amounts to little more than a really impressive re-enactment. It was difficult to recall meaningful characters: Waiting around to be rescued does not endear a character to an audience.

Perhaps not as creatively audacious, but certainly more difficult to describe: "Paterson," Jim Jarmusch's meditation on a poet and his hometown should not be forgotten from 2017. Neither should "The Beguiled," Sofia Coppola's update on the Clint Eastwood Civil War melodrama, or its cousin "My Cousin Rachel," another beguiling and breathless period drama, adapted from a Daphne du Maurier novel, that was mostly overlooked. S