As State of the James Report shows cleaner waters, Gillespie, Northam commit to the trend 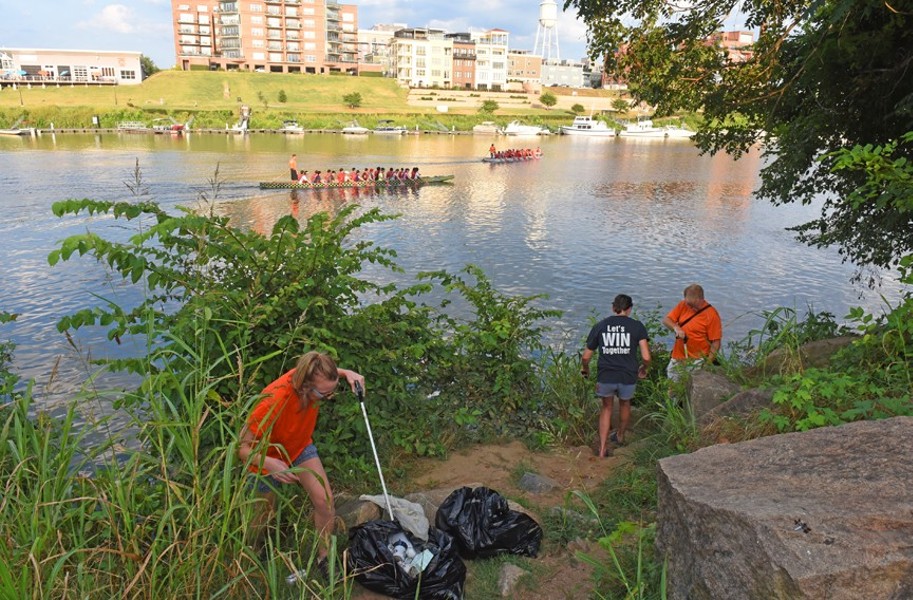 Scott Elmquist At Ancarrow's Landing in July 2017, volunteers with RVA Clean Sweep fill 50-gallon trash bags with litter thrown into or left beside the James River.

One in three Virginians live within the James River watershed, and 2.7 million people rely on the river for drinking water. The James is the state’s largest tributary to the Chesapeake Bay, and according to a report released by the James River Association (JRA), its overall health has shown what the organization’s CEO calls “tremendous progress.”

The JRA’s biennial State of the James Report is a quantitative assessment of the river’s overall health that examines four primary indicators: fish and wildlife, habitat, pollution reductions, and protection and restoration actions. The report reveals an overall score of a B-, an increase of 62 percent since 2007, and an improvement of three points since the last report in 2015. That’s the good news, but JRA officials are quick to note that there’s more work to be done.

“To see this increase over 10 years is, I think, remarkable, particularly when you think back to 40 years ago when the state of the James was at what we would estimate to be in the low Ds,” JRA CEO Bill Street said last week during a press conference. “Going forward we need to pivot to really focus on the runoff from the land that comes into the river.”

In its 2017 policy agenda, the JRA outlines five actions for the next four years to improve the health of the river. One is a commitment from the next Virginia governor to clean water funding, with a recommended allotment of at least $62 million per year for agricultural practices and $50 million per year for stormwater practices.

With the federal administration proposing significant rollbacks to clean water protections — such as President Trump’s promise earlier this year to eliminate all funding for the Environmental Protection Agency’s Chesapeake Bay Program — the JRA says it’s crucial for state legislators to prioritize improving the health of the river and the bay. And with Nov. 7 just around the corner, advocacy groups like the JRA and the
Chesapeake Bay Foundation are doing their best to keep environmental
protections on everyone’s radars.

“The upcoming elections will play a significant role in determining our continued progress in restoring the James, because we are at a pivotal point in river restoration and need to keep moving forward,” says JRA Government Affairs and Policy Manager Adrienne Kotula. “We have worked to ensure that clean water is a priority for the gubernatorial candidates with our Clean Water Forum, where both major party candidates were asked a series of questions on our critical issues and we will continue to ensure that it remains a priority with the next administration.”

Democratic candidate Lt. Gov. Northam’s campaign did not respond to a request for comment in time for publication. However, during the September forum, when asked if he would commit to sticking to the Chesapeake Bay Total Maximum Daily Load (TMDL), the EPA’s 2010 blueprint to restore clean water in the region, his response was an emphatic “yes.”

“We have made a lot of progress, but we still have a lot of work to do and I will do everything I can,” Northam said, adding that he grew up on the Eastern Shore, with the Chesapeake Bay in his backyard. “I think if you look at my environmental record you will see that the health of the Chesapeake Bay and rivers and creeks that feed in the Chesapeake are certainly very important.”

“The TMDL has been successful in helping us meet our goals and make progress and we need to stay the course in that regard and stay consistent to make sure that we’re doing everything we can to clean up the Chesapeake Bay, and I’m committed to it,” he says.

Last week, Gillespie’s campaign spokesman Dave Abrams told Style Weekly, "Ed knows we cannot zero out the Chesapeake Bay cleanup fund, and he will work with our bipartisan congressional delegation to make sure we restore that funding. If there's a gap, he would look to find that money in our state budget."