A new book and exhibit celebrates Richmond artists, past and present.

Scott Elmquist Photographer John Henley stands near the front of his current exhibit, “Artists,” at Glavé Kocen Gallery. It runs through July 18 and is the Main Street gallery’s final show after 17 years of highlighting local artists.

The life of an artist is many things but easy is not usually one.

Most artists struggle financially throughout their lives and learn to hustle with commercial side projects while still trying to pursue their art. Some lucky ones manage to merge both. But living an artistic life does have its benefits – such as staying true to your own voice and spending time around other creative people.

Richmond photographer John Henley has spent his life around artists. Now he’s showing his appreciation with a new coffee table book, “Artists,” filled with black-and-white portraits of legendary Richmond artists he shot over the last six years – many of whom he came to know personally over the past four decades.

There’s also an accompanying exhibition, the farewell show at Glavé Kocen Gallery, which runs through July 18 and features the portraits next to samples of the pictured artist’s work in an impressive tribute to the local scene, past and present.

“Jennifer and I thought this would be such a lovely show to end on,” says B.J. Kocen, who has run the community-oriented art gallery with his wife for 17 years. “It’s people who are important to John and the other half are people that we just really had the best relationships with – the gold standard.”

Walking through the exhibit, Kocen says that he now plans to focus on running the Current Art Fair every fall, which has been canceled this year – as well as some local music projects already underway.

Along with the images, Kocen asked the artists to provide a “pause and reflect moment [about their art] and how they felt about the photo and the gallery.”

Before taking on this project, Henley was known mostly for his gorgeous and meditative landscape work — though some of these newer portraits were featured previously in a 2017 show at the headquarters for Capital One.

“I’m very interested in connecting with some sort of essence in people,” Henley explains. “I think what I learned in doing this book is that it’s about getting into an intimate space with another person, forming some kind of gestalt connection, where something of that person’s spirit comes out.”

A native of Richmond’s West End, Henley grew up with an outdoorsman father and loved being out in the woods and hiking. But his road to photography started in Germany, where he was stationed in the Army in the mid-1960s.

He says he bought a cheap Pentax camera on base and started taking photos of the landscape around him as a hobby. He decided then that when he got out of the Army, he would go to an art school.

After a year at Virginia Commonwealth University, he ended up going to the San Francisco Art Institute in 1967, during the famed “Summer of Love,” where he lived in the city’s Mission District.

“It was amazing, as you can imagine, pretty wide open,” Henley says, laughing. “The school had a distinguished faculty. Ansel Adams had taught there. I met some well-known artists, names mainly photographers would know.”

He notes that future celebrity photographer Annie Leibovitz was there when he was, though he didn’t know her well. “She used to go the Fillmore and shoot bands for free pretty much,” he recalls of Rolling Stone’s first major photographer. “I did meet Robert Frank, the brilliant photographer who did the book ‘The Americans.’”

Frank was a visiting artist at the school and Henley, who was greatly influenced by his street photography, can still remember his hero critiquing novice student work. “I had a picture of my wife Linda and another of my cat. I remember Frank came up and said: ‘Pretty girl. Cute cat.’ What else could he say?”

More importantly, Henley says, he got into the habit of making art.

“That’s what sustains a career. When I teach at VCU, I have to restrain myself from saying, ‘it really doesn’t matter what you’re doing now,’” he says. “It’s the passion, the worm in your belly. I got that from the Art Institute. They tried to teach you to look within yourself.”

Henley returned to Richmond in the early 1970s, getting shows right away as some considered him a California artist. Later that decade, Henley lived in the Linden Row area, now the Linden Row Inn, a small enclave of Richmond artists, writers and eccentrics. “That was a golden period for me for sure,” he says.

“One was Willie Anne Wright, she was and still is one of the most important photographers in Richmond,” he says. “Very kind and giving kind of person who took a lot of people under her wing – and I was one of them.” 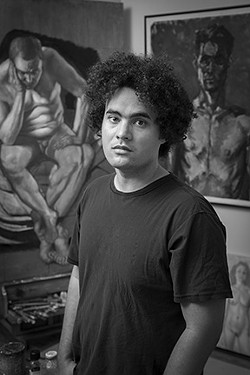 Later in the 1980s, Henley began doing commercial work for Best Products, where he worked with Style contributing editor Edwin Slipek, who wrote the foreword for the new book and whose portrait, along with Style photographer Scott Elmquist, is featured. “There is something reassuringly calm about working with him; he is firm but always reasonable and level-headed,” Slipek writes about Henley.

The portraits of people are relatively new in his long career. But it isn’t the only thing that has changed in his life: He notes that he remains fascinated by Buddhism and Hinduism although he doesn’t formally engage in the religions.

“I’ve read probably 30 or 40 books on Eastern philosophy. I think in an indirect way it has affected my work,” he explains. “My personality changed over the years to being more serene, like the ‘Seinfeld’ episode: Serenity now. I can sort of get into a space with a person that makes portraiture happen easier.”

In today’s tumultuous times, it can be easy to forget the contributions and talents of past generations, who had their own struggles and battles, failures and victories.

“I think there’s a conversation [in this show] between the portrait and the art that is bigger than either one of them independently,” Henley says.

The book and the final show at Glavé Kocen Gallery provide a welcome tribute to a continuum of wonderful Richmond talent. We’re lucky to have known the work of these artists – and for those who are still creating today.

John Henley’s “Artists” is on display at Glavé Kocen Gallery, 1620 W. Main St., through July 18. The gallery is now open Thursdays through Saturdays noon to 4 p.m. glavekocengallery.com. You can order the book for $50 from Henley’s Facebook page.