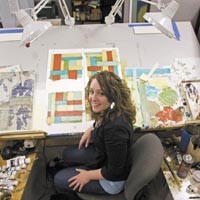 Jennifer Goldberger was visiting a friend in Calgary, Canada, a few years back, when the pair happened into a little home dAccor boutique decorated, as it turned out, with several of Goldberger's paintings.

She was pleased — but not surprised — to see her work thousands of miles from her home in Richmond.

Goldberger, 29, is a commercial artist whose work doesn't hang on vanilla gallery walls, but rather as the wall dAccor on display next to department-store bedding tableaus. It's chosen not so much for its provocative message, but for its ability to complement whatever comforter is on sale.

Goldberger is design director of New World Graphics, an 18-month-old line of small, decorative prints aimed at big-box chains such as Target and Kirkland's for $10 to $40, unframed.

With unruly hair and chipping silver nail polish, Goldberger still looks like the art student she was when she graduated from Virginia Commonwealth University in 2001. At VCU, she focused on painting photorealistic nudes. She always felt her classmates and teachers were too preoccupied with concept and philosophy, and that she was constantly defending her technique-heavy projects.

“I was an outcast among outcasts in art school,” she says. Those doctrinal differences between what was most important about art — method or meaning — pained Goldberger in art school, but it also meant that she had less of a problem embracing a nearly concept-free artistic practice.

Although some of her classmates may view what she does as selling out, she has a different take. “Maybe selling out is not so bad,” she says. After all, she's one of the lucky few art students who graduate and go on to a career that allows her to make art every day, albeit with certain constraints.

“I have multiple viewers and I have to reach all of them,” she says, which can limit the message and its sophistication.

The universal language, it turns out, is bugs. “Whimsical Dragonflies I and II,” a pair of hand-colored antique dragonfly images, another designer's work, was originally released by the company in 1999. It's sold 11,300 copies since.

Tropical themes are a constant as are birds, flowers and landscapes. “When ‘Sex and the City’ was big, that's when girly girl hit,” she says. Girly-girl prints, with bold colors and fashion-inspired imagery, found their counterparts in 2003, a masculine year that translated into beer bottles in rich tones and a still life she did of crossed daggers resting on a dish of playing cards and poker chips. This year, yellow is hot.

Some of the images are reproduced on massive printers. Others in the Old World line start with copies of the outlined images, which are then shipped out to artists across the country to paint in by hand, like high-end coloring books.

When coming up with the images, Goldberger turns to home dAccor and fashion magazines to make sure the work complements the colors and patterns in the latest market trends. The business is directly tied to real estate — strong home sales mean big business — so things have slowed recently. Home Accents Today, an industry magazine, estimates that last year the wall dAccor market brought in $6.1 million in sales, and that that number will shrink significantly in the sour economy.

Those palm trees and fruit bowls may look innocuous, but Goldberger concurs that working on the commercial side can damage an artist's credibility.

Standing in a Main Street gallery a few years back she heard a cautionary tale of an artist whose work got picked up by Pottery Barn. It destroyed her appeal in the choosy gallery market.

That attitude can make it difficult for Goldberger to recruit new artists. Some prefer to work under a pseudonym.

Artists who contribute 100 simple designs a year, depending on how much gets picked up by retailers, stand to make between $5,000 and $10,000 — a nice bonus for a starving artist. If they get lucky and, say, Target licenses an image and prints it on cups or towels, they could make as much as $100,000.

For her part, Goldberger makes no apologies. “I like big blockbusters,” she says. “I don't necessarily have to stick to Sundance.” S