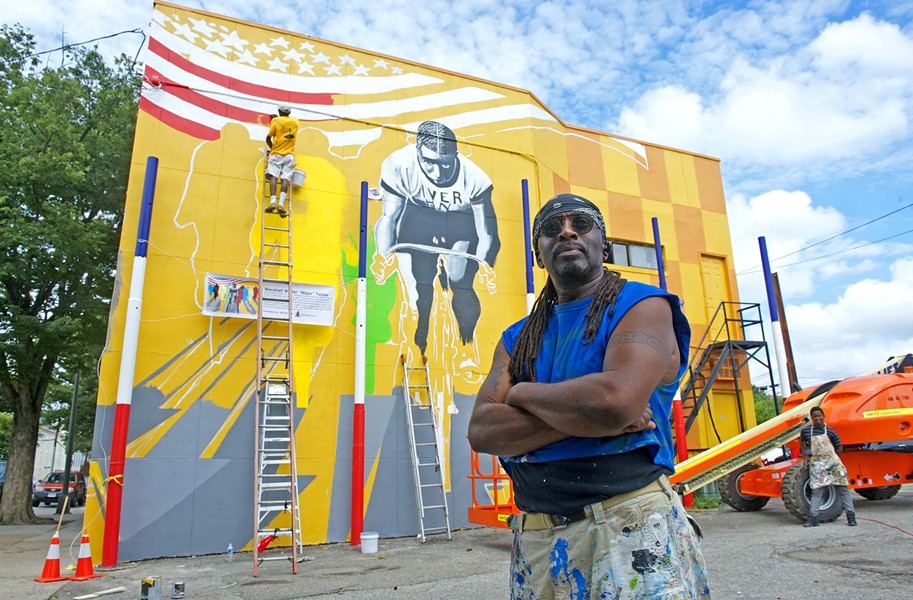 A few months ago, James L. Thornhill, a noted mural painter from Jackson Ward, heard about Marshall “Major” Taylor for the first time.

After a check of Taylor online, he learned that the Black Cyclone was a world-champion racer who competed from 1894 to 1910 — although he was banned from races in the southern United States, including Virginia, because he was black.

“I thought, this has to be a mural,” says Thornhill, who got underway with a 40-by-40-foot painting of the cyclist at 401 N. First St. in Jackson Ward, where Thornhill has painted other murals. It’s halfway finished.

Now he and sculptor Dawn Cherry are raising money to have it completed by the UCI Road World Championship races, which start Sept. 19. Donations can be made at iammajortaylor.com.

“When we did some research, we learned there isn’t a lot of African-American participation in the Richmond race,” Cherry says. “But all the professional racers know about Taylor.”

An athlete with consummate strength and balance, Taylor got his start at his Indiana home, were he was dubbed the Major because he would perform bicycle acrobatics while wearing an Army uniform.

He won his first race there at the age of 16. But when his skill became known, he was banned from further competitions in the Hoosier state. He also couldn’t participate in Southern states because it was against social norms for blacks to compete against whites.

Undaunted, Taylor moved to more welcoming Massachusetts where he settled in Worcester, then the nation’s center of bicycle manufacturing.

Taylor mixed working as a bicycle mechanic and brand promoter with being a professional racer. He raced in some Northern states but found a much better reception in Europe. He raced in 57 competitions, winning 40 of them. They included both sprinting and days-long events.

Taylor quit in 1910 at 32 because he was getting too old to compete. Although he was making as much as $30,000 a year — much more in today’s dollars — he lost his wealth through bad investments. He died poor in Chicago in 1932, but his body was later exhumed and buried in a better cemetery with help from Schwinn Bicycle Co.

The mural depicting him can be seen from Broad Street where UCI racers will be competing, says Thornhill, a retired Philip Morris employee who teaches painting at various schools in the city.

“Taylor was a true trailblazer and the mural should help bring all of us together,” Cherry says.