Scott Elmquist Eva Rocha, a native of Brazil, with some of her mannequins inside her spacious Maury Street studio.

The door of Warehouse 14, an immense beige box on Maury Street, is cracked open on a cold November night. Beyond is a dark, yawning space, where coffee-can spotlights illuminate bound and shrouded mannequins. Dismembered hands crouch like spiders on their stands. Three nude women, twice as large as life, occupy endlessly filling bathtubs.

It’s unnerving. It’s a place of silent violence — and irresistible invitation. Then Pamela Kiecker Royall, noted art collector and philanthropist, appears out of the shadows and cheerily urges us to have some wine.

“This is the space of my mind,” artist Eva Rocha says.

Virginia Commonwealth University had secured the use of this 1940s tobacco warehouse for its fine art graduate students. But Rocha was the only kinetic imaging student who wanted to work there. In April 2015, she found herself alone in the cavernous, heatless building.

It’s not exactly homey. “I processed a lot of fears here, and a lot of emotions,” Rocha says. Yet the warehouse slowly began to welcome her.

With square, wooden supports lifting a 20-foot ceiling, it feels like a cathedral, she says. It conjured memories of her childhood and young adulthood in Brazil: memories of churches, grain silos, theaters in São Paulo, even her time working as a trapeze artist.

An old photograph of a tobacco auction, where men clamored to bid on choice bales, led her to create “Ode to the Object”: an installation consisting of a bound bundle of lingerie presented on a rusted bed frame. Dozens of men’s hats, evoking buyers, are arranged on the floor.

Rocha continued to explore the intersection of women’s bodies and commerce by filming herself, nude, constricted and curled inside a trunk. She projected the video onto four crates filled with rice, beans, salt and sugar. The title: “I Am Not in the Business, I Am the Business.” 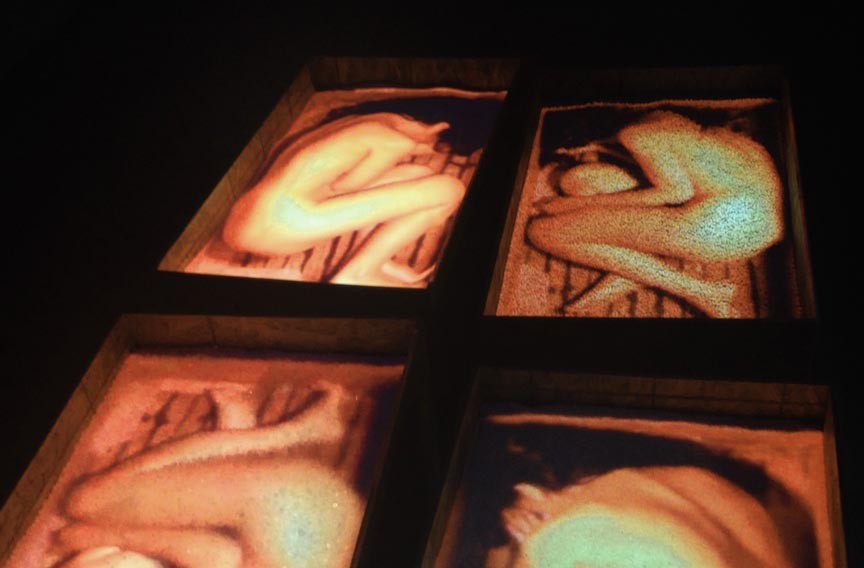 The piece is now in the collection of Royall and her husband, Bill, noted Richmond art patrons. Rocha’s work first caught their eyes when they attended the VCU master of arts candidacy show, Pamela Royall says: “You’re moved by it even before you understand it.”

In art school, Rocha says, her professors discouraged her from creating political work. She resisted, fiercely. “Everything is political,” she says.

Rocha was born in Brazil during the country’s two-decade rule by a military dictatorship. “It got to a point where artists could not say anything that they really think,” she says. “It could not have a message.”

Her work is the opposite; it probes the darkest currents of our time.

Rocha expanded the human-trafficking theme of “I am not in the business” by creating 16 more crates, filling each with packing materials, and projecting the images of 16 women’s bodies onto them. Each figure shifts and squirms as it’s curled tightly in the crate.

The piece, “Object-Orientalis,” was a sensation at last year’s InLight exhibition, held on the grounds of the Virginia Museum of Fine Arts. It also won the people’s choice award. Curious crowds gathered around the crates and poked the projected images, or stirred the crates’ contents with their hands. The work wasn’t intended to be touched, Rocha says, but she appreciated viewers’ connection with it.

At an earlier exhibition of “I Am Not in the Business,” she recalls seeing one man sneak his hands into the crate full of beans to let them run through his fingers. When a woman scolded him, he said: “It’s impossible to not touch. It’s so tempting.”

Rocha reverses that dynamic in such works as “Triptych,” the triple projection of her nude body in the bathtub. The center projection stares, unflinching, at the viewer. “I want to see, what if the artist looks back at the public?” Rocha says. “What if the artist is the objectifier?”

Rocha is preparing to surrender the warehouse studio that enabled her to create these large-scale works. The owner of the building, Fountainhead Properties, allowed her to work there for a year and a half, free. Now, Fountainhead is planning to lease out the building as part of its Clopton Siteworks complex for entrepreneurs.

“I think she’s been masterful in using that space,” Royall says. But she’s encouraged Rocha not to let the studio — or lack thereof — solely determine the shape of her work, she says. Rocha has been experimenting with textiles and smaller pieces, notably the mudras: disembodied hands that tell their stories by holding railroad spikes, or a Sacagawea dollar or a wedding ring on a single finger.

Rocha hopes to show her work to a wider audience, and to find a new place to create. Heat would be nice, she acknowledges, “Though I love this space, even so.” S