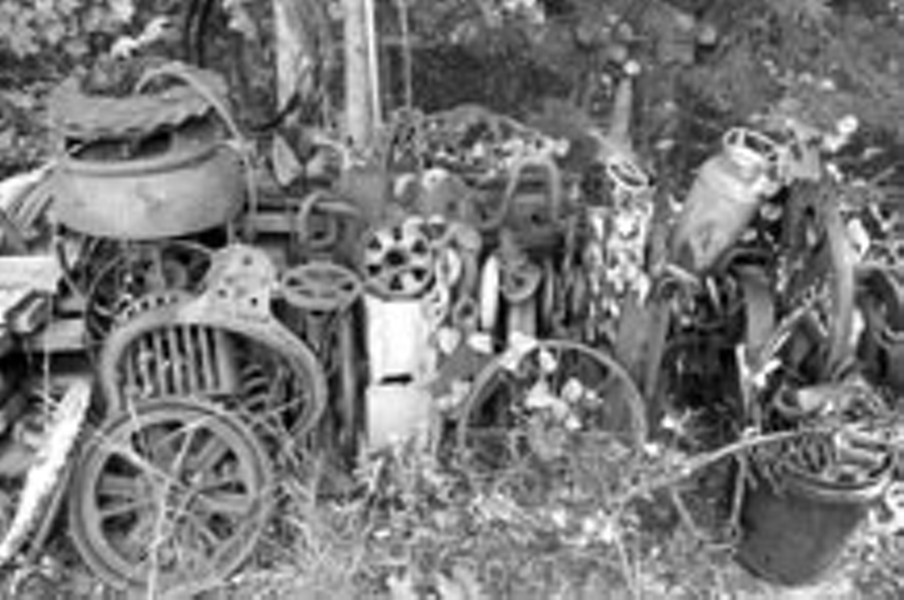 First, the alter ego. In his artistic life, John adopts the name Giovannia Meola from his beloved father, who was a machinist in a follow-the-handbook world of New England factories. The son dedicates his unorthodox art to the man who taught him how to work with tools and so introduces a sly, freewheeling universe where a saw blade becomes a tea table to be plucked for purchase from an art gallery or hidden away like contraband, too sacred to sell.

Then there's his burning need to express. Meola keeps logbooks on nearly everything he encounters: verbal sketches, ideas for projects, "recipes for madness," he laughs, rifling through dogeared volumes stuffed with notes and commentary from his worldwide adventures. "The Existentialists, the Beat poets, still define half my imagery," Meola says. Favorite authors are William Gaddis and Gabriel Garcia Marquez, and it's a Warren Zevon quote that revs him up: "I'll sleep when I'm dead."

On obsessions: "I think there's a trail of iron following me sometimes," Meola says, eyeballing a decades-long accumulation of rusting metal that will form his compositions. He has andirons and bicycles, wheels and pulleys, transmission covers, turnbuckles and anvils, hydrants, hinges, manhole covers, horns, helmets, headlights and hooks, all strewn along the margins of a country field, awaiting the weeds and eventually his ideas.

From these fragments of past worlds, Meola arranges and welds together functional objects like screens, tables and benches, and sculptural pieces for gardens or elsewhere. He made a stylized Eiffel Tower for his daughter's engagement, and armillaries so heavy they need a forklift. He has turned water valves into window grilles, and farm implements into garden gongs. A castoff iron bed, unearthed in the woods, is a delicate trellis now covered in vines. Some pieces, Meola says, define themselves and others he helps along with artful adjustment.

He uses a portable wire-feed welder mounted on an old Radio Flyer wagon. It uses low heat and doesn't generate a lot of sparks, and allows him flexibility to create a range of pieces. Some of the work comes together on the back of a truck, but most is made in his studio at Plant Zero, a wonderland for which he praises founder Tom Papa. "The guy has single-handedly advanced the visual arts in Richmond by a giant leap forward," Meola raves. "A welding studio with air conditioning? That's unheard of!"

Everyone, he contends, has an ability to create, "and if they'd get their collective ass off the couch and contribute something, make something, advance their cause," he says, "the world would lose its Wal-mart-and-plastic mentality" and become something more inspired. He teaches people to appreciate the craftsmanship of an ornate fitting, a hand-wrought lightning rod, the guts of an old piano. Sometimes he shows them how to weld. He hopes they will create something meaningful and discover their artistic potential instead of watching the world go by through a television screen.

Peace comes to Giovanni Meola far from the city, when he stands and surveys the farm field where his prized possessions gather like a sleeping cast of characters. "In rust I trust," he grins, his sea-green eyes wide with possibilities for the next project. He grabs a handful of parts, inhales deeply and prepares to return to the fray.