The story of one of the most visible signs from this summer’s social unrest, recently acquired by VMFA.

Scott Elmquist Cliff Chambliss holds the sign he created while standing on the pedestal of the Robert E. Lee statue on June 6.

The installation of New York artist Kehinde Wiley’s “Rumors of War” sculpture in front of the Virginia Museum of Fine Arts is looking more prophetic every day.

The public sculpture of a modern African American man astride a horse took its name from a series of paintings Wiley created in the early 2000s, while the piece was modeled on the nearby J.E.B. Stuart monument. Nationally, it was billed as a major American artist’s response to Richmond’s nearby Confederate statues, most of which have been taken down since then – some more gracefully than others.

Wiley’s statue is the highest profile work of art unveiled in Richmond this century, so it’s not surprising that one of the most memorable signs from the local street protests after the killing of George Floyd makes reference to Wiley’s work. The handwritten, two-sided sign by artist Clifford Chambliss III reads “Rumors of War Wasn’t a Rumor.” It was shared across countless Instagram feeds and captured in news photographs that traveled around the world.

Now the sign has been bought by the VMFA for $1,500 and is being archived as an artifact from this summer’s social unrest. The piece won’t sit on the walls of the museum, but anyone who wants to research the Wiley work should be able to find it.

“It will be part of the context that arises in the aftermath of this installation – how the world really responds to this piece,” explains Valerie Cassel Oliver, the Sydney and Frances Lewis family curator of modern and contemporary Art. “This artist created it as a way of vocalizing his own frustrations and to speak to the moment.”

Oliver agrees the VMFA was lucky it wasn’t beaten to the punch in acquiring Chambliss’ powerful sign. Several other artifacts from the protests have been secured by the Valentine and the Virginia Museum of History & Culture.

The Valentine has collected numerous rubber bullets fired at protesters on June 14, two metal projectiles used against protesters June 26, as well as posters, a spray paint can and “one print depicting the Lee monument sans horse.”

Eric Steigleder, marketing director at the Valentine, says these kinds of items are essential to that museum’s role.

“[They] become a part of the historic fabric of our city and tell profound, important and often painful stories,” he says, adding that preserving these objects “will make it possible to provide context, convey significance and explore this transformative moment in our community for future generations of Richmonders.”

For its holdings, the Virginia Museum of History & Culture has requested a piece of the burned out GRTC bus, as well as collecting signs, posters and other personal artifacts from the protests.

Regarding the VMFA purchase, Oliver refuses to give credence to anyone who might read the Rumors sign as a kind of encouragement of racial conflict or war.

“I did not see this as a rally cry for any kind of civil war,” she says, adding that neither Wiley or Chambliss are calling for that. “The moment we’re living in is fraught, with strong feelings on all sides. But there is no doubt that systems set up over the course of centuries have served to suppress, undermine and disenfranchise the African American community. [These are] now being scrutinized and seen in ways they never have been seen before. I think you have to see it within that context.”

A native of Richmond, Chambliss, 36, comes from a long line of civil rights activists, so it’s understandable that he prefers the term patriots to protesters.

He attended Richmond Public Schools through the eighth grade, then Maggie L. Walker Governor’s School for high school, where a photojournalism class had a strong impact, he says, teaching him to tell stories through images.

After attending Hampton University for college and grad school, he worked in marketing and advertising in Richmond before studying intellectual property law at the Catholic University of America. He currently works for the U.S. Copyright Office in Washington, but still lives in Richmond.

Chambliss has been involved in the local arts community since he was young, he says, first playing music then transitioning to visual arts with his photography in high school. In college, his work turned to apparel and sewing as well as screenprinting. His interest in Wiley has been developing for years. He first became acquainted with the “Rumors of War” painting series during a retrospective show of Wiley’s work at VMFA in 2016. He says that he photographed the “Rumors of War” statue in New York before it was moved to Richmond, where he shot the local unveiling.

Chambliss went out shirtless to protest June 3 to “let his Black skin be a part of the sign,” he says. He was hoping photographers and other artists would notice.

“Coming from a family active in the civil rights movement, I knew I had to get out there and be a part of the peaceful protests,” he recalls. “I was thinking about themes of Richmond and thought of ‘Rumors.’ The war on police brutality, the war on Black lives, it all resonated that rumors of war wasn’t a rumor.”

However, he was shocked when his sign garnered worldwide exposure and he got requests for an interview from Agence France Presse. The image went everywhere from Canada and France to Kenya, he says, covered by ABC, NBC News and Forbes.

Most of the feedback was positive, though some people had questions.

“[In person] a couple people had more questions about it, they weren’t necessary expressing dissatisfaction,” he says, adding that it was eye-opening to see the comments on the museum’s online post about the purchase. “I’m not trying to incite a war, but there is some kind of prophecy in it, or foresight, even in the statue itself. Some people are asking, is it really art? You have to look at it as a thread within the larger artwork.”

“That’s what art is supposed to do. Shake things up, create a dialogue, and I would say that was achieved.” 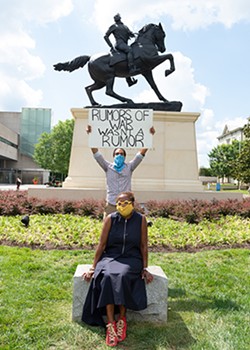 Is there is any work of living art more important in Richmond right now then the Lee statue, covered in layers of contextual graffiti?

When asked if the VMFA would ever consider acquiring it, were it available from the state -- Oliver laughs and says there would have no place to put the 60-foot-high monument. And that’s not taking into consideration moving it or the security that would be needed, she adds. Instead she believes that Lee has become “the people’s monument” and that it should stay where it is, re-contextualized as a people’s park.

“Just like the Berlin Wall stood for a long period of time,” she says. “The monuments had to be dismantled. … but I personally think that dismantling everything is somewhat problematic because people need to see what was there before.”

She mentions the movement to rename the Edmund Pettus Bridge in Selma, Alabama, after Rep. John Lewis, noting the congressman expressly did not want that honor, preferring it to stand “as a historic symbol of oppression.”

The museum laid off 32 part-time workers at the end of April because of the pandemic. Asked if, as a person of color, Oliver finds the atmosphere at the museum diverse enough, she says it’s doing better than most national museums.

“We have women of color in leadership capacities – can there be more diversity, yeah. But line us up with anyone and we will be doing better than most, we’re a leader,” she says. “Museums are not neutral, they never have been.”

National media pundits have remarked on the puritanical zeal of this moment; that widespread protests have taken on a religious fervor.

Interestingly, the title of Wiley’s work likely was taken from a biblical passage in Matthew 24: “Ye shall hear of wars and rumors of wars: see that ye be not troubled: for all these things must come to pass, but the end is not yet. For nation shall rise against nation, and kingdom against kingdom: and there shall be famines and pestilences, and earthquakes in diverse places. All these are the beginning of sorrows.”

With his title, Wiley intended “to cast a wide net,” Oliver says.

“He talks about in a circular way: the heroicness of those who are engaged in battle. He really doesn’t want to close the interpretative space. It speaks to the underdog, the believer, that you will be persecuted, there will be wars and rumors of wars. But in the end, if you’re a believer, you will be victorious.”

For his follow-up, Chambliss says he will be launching the online shop Trinity, which he describes as “small-batch apparel, photography and wall art.”

For now, he’s simply humbled this his sign has become closely associated with this moment in our nation’s history.

“I know my ancestors are looking down and feeling very, very proud,” he says.