Writers look back at the music and other art that helped them through 2020. 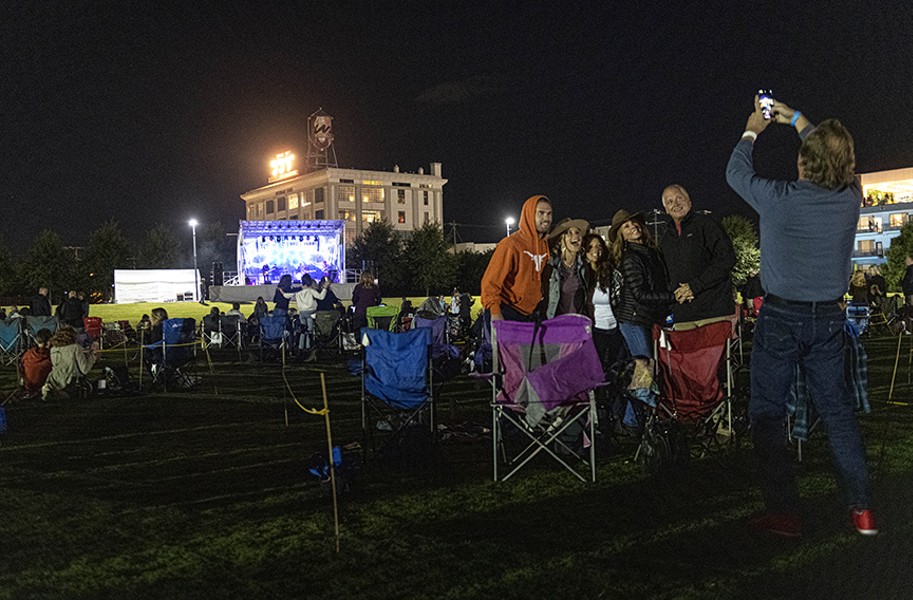 Scott Elmquist/File Friends pose for a photo in their socially distanced pod during a concert by Full Moon Fever, a local Tom Petty tribute group, at Bon Secours Training Center.

Hate to say it, but my media intake has largely been the equivalent of comfort food in the pandemic. During the lockdown this meant binging Bourne and Bond movies, watching skateboarding videos and listening to old punk music (I recommend “No Thanks! the ’70s Punk Rebellion” compilation).

Like most everyone, I found solace in period drama series like “The Crown” and “The Durrells.” Music-wise, the three 2020 albums I’ve played most often are post-punk, new wave group Sweeping Promises’ “Hunger for a Way Out,” the psychedelic grooves of Tame Impala’s “The Slow Rush” and local indie pop band Ruth Good’s “Haunt.”

The best book I read this year was Michael W. Twitty’s 2017 “The Cooking Gene,” which argues that Southern cuisine has its origins in Africa, while also jumping into a smorgasbord of other topics, including history, slavery, genealogy, sexuality and gender. It could have easily been four books.

I’ve missed Richmond’s usual abundance of live music and theater, but I’ve caught a few novel opportunities to enjoy both. In October I saw local Tom Petty cover band Full Moon Fever in a socially distanced setting at the Bon Secours Training Center. Firehouse Theatre is one of the few theater companies to have staged work during the pandemic, starting with its exemplary one-man adaptation of “The Picture of Dorian Gray,” starring Billy Christopher Maupin. It may have been the first live professional theater performance in the country since the pandemic hit.

Especially since the weather has gotten cold, I’ve frequented the Virginia Museum of Fine Arts and the Institute for Contemporary Art quite a bit. It’s nice to return to the same pieces of art again and again. It’s like visiting old friends. And I’ve tried to pick up food regularly from the places I’d be saddest if we lost because of the pandemic, like Bamboo Cafe and 8½. There are two restaurant-related developments I hope we keep after the pandemic: the expansion of sidewalk seating and the ability to take alcoholic drinks to go.

A friend and I have taken to what we call Euro strolls in the pandemic. Usually on a Saturday, we set out on foot with daypacks filled with beer and snacks and walk around Richmond as though we were tourists strolling through Europe. You see a different version of the city as a pedestrian than you do by car, bike or bus.

Digging down through the daily strata of social media posts, 2020 started as a dynamite year: Dexter Moses at the Virginia Museum of Fine Arts on Jan. 2 and many of the same great players a few days later with James “Saxsmo” Gates’ all-star band at the Dark Room.

The same was true in February with Charles Owen’s Quintet, followed a week later by Andrew Randazzo’s Big Band at Poor Boys, with a tasty side of trumpeter Taylor Barnett at the Dark Room in between. People packed Gallery 5 for Angelica Garcia’s joyous launch of her breakout album, “Cha Cha Palace.” And again at Miramar’s Hof concert with the Rosette Quartet, just before it left on an epic Russian tour.

Then it ended. For me, the sharp dividing line is the elegant, high-waisted, black-laced evening dress worn by medieval instrument virtuoso Niccolo Siegelman at his eclectic James River Park System and Classical Revolution-sponsored recital at Bee Cider on Feb. 28. The evening finished with drinks outside with close friends whom I haven’t seen since.

The musical flood shrank into streams. The virtual Folk Festival shows at Spacebomb and Carlos Chafin’s series at In Your Ear were professional productions. Rene Marie’s gig with Daniel Clarke on piano opening for Ranky Tanky at PBS’ Mountain Stage was breathtaking. The comic book vibe of Butcher Brown’s weekly drops was distinctive. But most streams were charmingly do-it-yourself. Happening on Morgan Burrs’ late-night Instagram jams was a treat. You could learn a lot about music from Rex Richardson and Marcus Tenney’s masterclasses. Todd Herrington started a painting show. Singers and songwriters such as Susan Greenbaum and Eddie Prendergast were in their element. Erin Lunsford’s charming “Stay Home Dangit” series showed that any couch could be a studio if you brought every light into the room. Sometimes an ad hoc stream from a major artist would briefly appear: Social distancing results in some surprising intimacy. But notable live performances were rare. One standout was the Richmond Symphony’s season-opening salute to Black composers at the sprawling Maymont estate. Interludes dramatizing the estate’s unsung Black workers’ lives provided a counterpoint to the score, as did a lone protesting airplane that buzzed low overhead towing a Confederate flag banner.

Front porch concerts in the Fan were a delight. A few venues had outdoor events, drive-in concerts or beer gardens with 6-foot-apart seating. And optimists continued to release music into the coronavirus void, notably the irrepressible James “Saxsmo” Gates and the musicians and podcasters of the quintessential free-form cultural commentary, the Hustle Season. The selection of Butcher Brown’s reworking of Little Richards’ “Rip It Up” as the new theme song for “Monday Night Football” amplified the buzz for “King Butch,” the Richmond group’s major-label debut.  But mostly, this was a year in the air, an Evel Knievel leap over a chasm of infectious disaster, hoping to land intact on the other side. 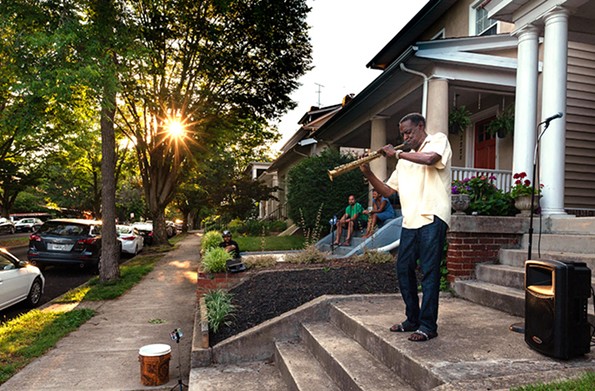 If this year had a hero, it was James “Plunky” Branch. Every night he came out and played for his neighbors. Amid the past year’s historic racial reckoning, his lifelong dedication to melding ancestral and modern culture gained overdue critical recognition. In the days when Confederate icons of the Lost Cause were being stripped from their pedestals, while neighbors gathered in lawn chairs and children chased each other down the grassy median, he spun out a brighter future, touched with hope in every note.

Virtual shows
Streaming at-home sessions were a lifesaver to start but got a little stale after a few months. However, a few folks kept me interested and feeling connected to the rest of the world for the long haul. Among my go-tos were Deau Eyes Sunday brunch sets, Big Freedia’s gospel-infused cooking sessions from her New Orleans kitchen, and beat freak extraordinaire Marc Rebillet bringing the one-person mayhem. However, the king of quarantine is sweat-soaked maniac Low Cut Connie with his Tough Cookies broadcasts that usually end with him in underpants on top of a piano in the middle of his Philly apartment. 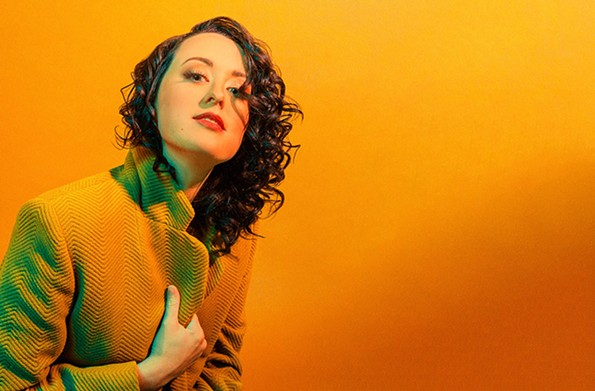 Member-funded radio
When the routine under one roof became predictable, I knew I could tune in to WRIR for some random Richmond punk or WNRN to hear artists I would have seen at Newport Folk festival this year. My standby, New Orleans’ legendary WWOZ, kept the vibe going with a smattering of blues, zydeco and gospel.

RuPaul’s Drag Race
Season 12 revved up as quarantine kicked in and gave us something ridiculous to look forward to for a few weeks. The usual spangle and spatting were ever-present and glorious as ever. With our drag shows mostly off the table this year, this filled a void. I recommend throwing singles at the TV for full effect. Team Heidi N. Closet and Jackie Cox forever.

Nina Simone, “Revolution” (Live)
Rarely a day goes by that I don’t listen to some Nina, but I kept coming back to a live clip of her performing “Revolution” clip when feeling low. Both she and the crowd are pure electricity. So timely and a reminder that we have to persist, resist and make change happen.

Kitchen Dancing
Highly underrated. Second to live shows, the thing I miss most is going out and throwing down on a sticky, beer-soaked dance floor and acting a fool. The party started when Lady Gaga dropped “Chromatica” and cranked up exponentially with the release of “Róisin Machine” from Roisin Murphy (former Moloko). And I can’t believe I’m admitting this, but Miley Cyrus rounded out the year with an absolute banger of a pop album, “Plastic Hearts.”

Local record stores: Throughout the pandemic, it’s been clear if there was one thing people couldn’t live without, it was toilet paper. But for me, the only thing besides food or coffee that would regularly get me into public spaces was used-record shopping. Plan 9 Records, especially, and Deep Groove, were godsends. Thanks to the employees there who kept strict social-distancing measures that allowed crate-digging junkies to stay safe. Of special note was recently deceased local guitarist Velpo Robertson’s collection at Plan 9, filled with interesting ’60s and ’70s fare.

Year of streaming dangerously: With most events canceled, it felt like I watched more television and movies this year than any time in my life. Among my favorites on Netflix were Charlie Kaufman’s “I’m Thinking of Ending Things,” Aaron Sorkin’s “Trial of the Chicago 7,” and Tamara Jenkins’ “Private Life.” On Amazon Prime, the “Small Axe” series was rich and rewarding. Lo and behold, the Criterion Channel offered its own retrospective of Richmond filmmaker, Rick Alverson (Rick, I would still love to somehow buy a copy of “New Jerusalem” from you). One of the best new films I saw this year was Kelly Reichardt’s “First Cow,” an American fable about whether nature can survive capitalism with unlikely friends bonding over sweet treats in the 1820s Northwest. 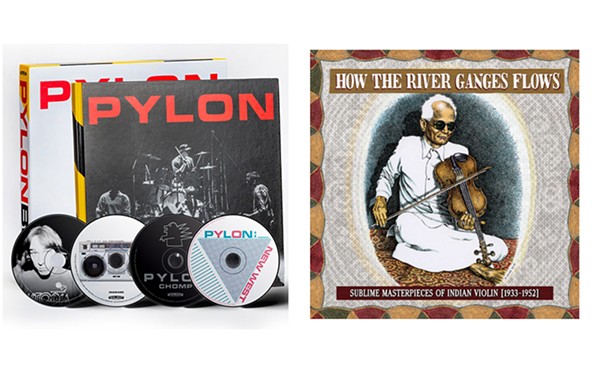 Musical gems: For a nonactive year, 2020 saw some interesting boxed sets, including a comprehensive set celebrating the great Athens, Georgia, group from the 1980s, Pylon, which included a lovely book of photos, testimonials and liner notes written by Style contributor Stephen Deusner. For folk music fans, check out the website of Gillian Welch and David Rawlings, who have been steadily releasing a trove of older recordings, many of them recorded around the time of their masterpiece, “Time (The Revelator)” (2001).

One album that helped get me through was “How the River Ganges Flows: Sublime masterpieces of Indian violin [1933-1952],” the latest compilation from Virginian Chris King of Long Gone Sound productions. He teamed with Jack White’s Third Man Records to release a compilation of meditative Indian violin classical folk music from the first half of the 20th century, with cover art by Robert Crumb. This wonderful collection, expertly restored from old 78s that showed up at King’s home three years ago covered in ash from funeral pyres along the Ganges River, is ethereal, mesmerizing and soulful in its depth of feeling. It will probably strike some as melancholy, the solo violin, mostly southern Carnatic, can sound like a lone human voice in the wilderness – buy hey, it was a mournful year.