"Art" Returns to the Museum 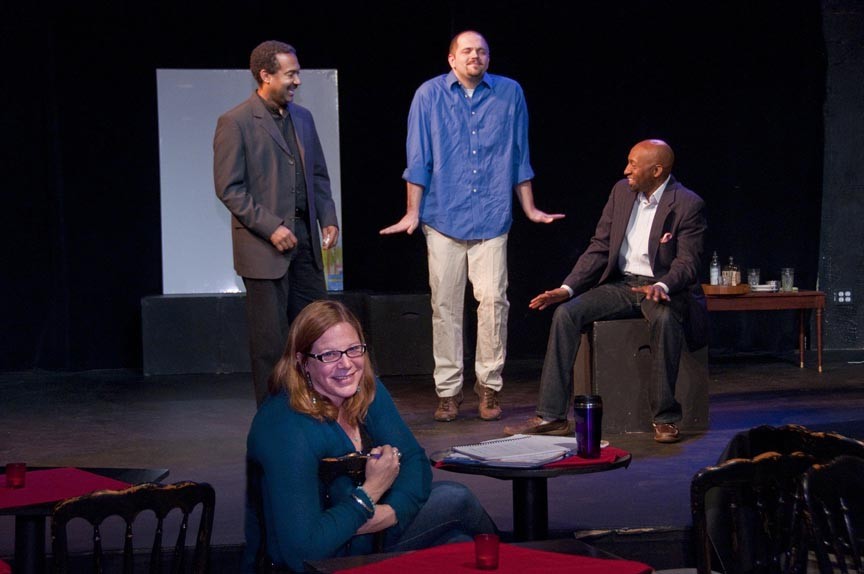 For the first time in eight years, the renovated Leslie Cheek Theater at the Virginia Museum of Fine Arts will house a full-scale theatrical production. It's a return performance. The 1998 Tony award-winner for Best Play, "Art" by Yasmina Reza, is being produced by first-time collaborators Richmond Shakespeare and Sycamore Rouge on the stage where it was last seen in Richmond a decade ago.

"It's nice to choose this piece to inaugurate the theater again," says the museum's director, Alexander L. Nyerges. "And how much closer to the center of who we are can you get?" he asks of the play's theme, which poses the question, "What is modern art?"

Reza's play is set in Paris, and focuses on the reactions, discussions and revelations surrounding one of the three friends' purchase of an expensive modern painting. Themes of the play touch on the power of art to generate discussion that in turn enlightens. "It is particularly apropos with Picasso," Nyerges says.

The retrospective exhibit of Picasso's work showing at the VMFA affords the viewer the opportunity to observe the evolution of Picasso's style and in a sense, visual art, during his lifetime. Certainly it generates plenty of dialogue regarding taste, social movements and Picasso's personal relationships. "The whole purpose of producing any art, whether its visual or performance, is to evoke a dialog in which anyone can participate," says K.B. Sane, producing artistic director of Sycamore Rouge.

Another relationship that's being explored is that of professional theater and the Leslie Cheek Theater itself. Following the demise of Theatre Virginia in 2002, live theater has been missing from museum as a resident art form. Since then there have been some renovations and other uses for the space, including a Friday Films series. It was even used as storage during the museum's recent renovation.

"We put in new seats and carpet before the theater closed," says Patricia Jagoda, the museum's manager of performing arts. She says audio and sound system upgrades happened during the overall museum renovation.

With all of this, there have been nagging rumors regarding the return of a resident professional theater company at the museum.

In terms of use for the space, Jagoda says, "The museum has taken it over and we have had some wonderful programming in here — symposiums, lectures, concerts. It is also possible for outside groups to rent the theater now."

Richmond Shakespeare's artistic director, Grant Mudge, says that such a rental not in his company's interest now. "One of the key components to being in this theater is that we have a permanent residency at CenterStage; Sycamore Rouge has a permanent facility in Petersburg," he says. "But the chance to have access to a 480-seat space when we are both working in 100- to 160-seat spaces is wonderful."

Nyerges and Jagoda say there's no resident company in the works despite the availability of several area nomadic professional local companies to fill it. "As an art museum we want to be a facilitator for live theater, for live music," Nyerges says. "We don't want to get into the theater business again. We have great theater right here in town, and for us to have the envelope to put the product in is much smarter." S

Yasmina Reza's "Art" will be performed April 22-24 at Virginia Museum, 200 N. Boulevard, and continue at Sycamore Rouge at 200 W. Old St. in Petersburg on selected dates from April 19-May 14. To purchase tickets for the VMFA dates go to richmondshakespeare.com and for the Sycamore Rouge performances, call 957-5707.