At Anderson Gallery, artists take on the South 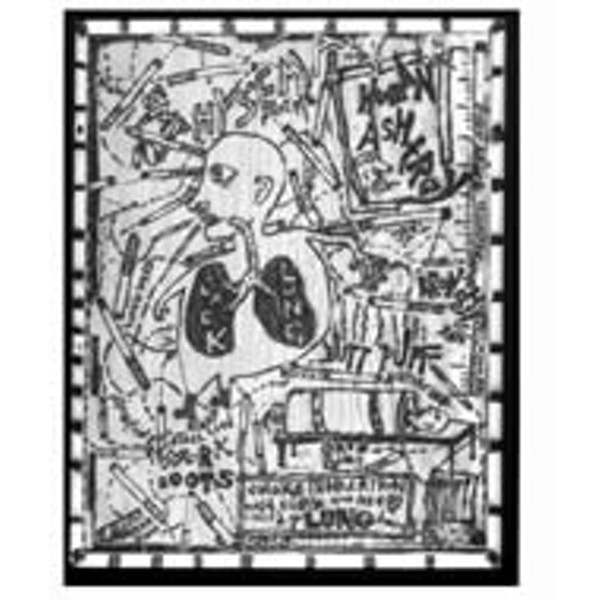 As its title suggests, "Thinking with Blood" tries to stir up a trail of personal and social history in less-than-genteel fashion. In it, 13 Southern artists, young and old, white and black, use the narrative tradition to bring to the surface underlying tensions. Like a voodoo doll that is quartered and sectioned to symbolize the location of personal (and cultural) demons, the theme of the South has been aggressively "stabbed" by some of these artists as a means of exorcism. Consequently, lots of emoting takes place in this show.

Several of the artists here take the idea of therapy literally by using aggressive mark-making and/or language. Martha King's obsessive words, phases and cartoonish drawings in ink and gouache that fill every inch of available space seem to have been tumultuously spewed from the artist's pen in an act of cathartic purging. In "Four Birmingham Girls," King portrays the victims of the infamous 1963 church bombing in a simple, unsophisticated form as if she herself is the same age as the victims (one was 11, three were 14). The image is reverent and calm, but in contrast to the solemn memorial she creates with these portraits painted in blues and greens, she burns into its stark wood frame a forest of angry marks and words. More than rehashing the horrors of racial bias, King's clashing sentiments of restraint and anger bring the cycle of hatred to a personal and painfully graspable level.

Sarcastically portraying his subjects in stereotypical roles, painter Robert Colescott underhandedly points out existing racial biases. "The Jailor" and "Sands of Time I," both painted in immediate and rough fashion on paper, project an in-your-face attitude that won't accept a viewer's ambivalence. Melissa Springer, however, separates her subjects from such issues, focusing on formal concerns in three large black-and-white portraits of black males. In them, Springer amplifies her models' dark skin by reflecting light from it in areas and by letting the whites of eyes and teeth glow like neon. Calling her subjects "sentinels," she suggests that the physical power and beauty of these figures are both rooted in something internal.

Some artists mitigate their edgy subject matter by adapting their images to a "safe" physical form. Carol Burch-Brown's intricately detailed paintings mimic Renaissance religious panels, which often featured multiple scenes within a single screen, diptych or triptych. In "Relations Remembered," the artist stylizes a modern beach scene into a panoramic depiction of a mass baptism. Her highly rational style may keep her from being linked to holy rollers (and so she is "safe"), but Burch-Brown clearly understands that critical ties exist between organized religion and the South.

In contrast to all this turmoil is the celebratory and jovial "Johnson, Rodgers, Presley" by T. M. Dossett. Primitively carving wood and urethane into symbolic objects that are attached to curving branches, Dossett forms linear narratives of three individuals (perhaps Southern music pioneers Robert Johnson, Jimmie Rodgers and Elvis Presley) that entwine and overlap at several points. Dossett exploits clichés such as freight trains, fast cars and the blues with a humorous spirit. Painting each character's narrative in different colors (one black, one white and one blue), he expresses in simple terms a history that is not only significant musically, but because of the lack of racial boundaries, socially significant as well.

The word blood in its title may indicate a wish on the organizer's part to startle, but the subject matter is too familiar to do that. If anything attracts viewers to "Thinking with Blood," it will be how the artists in it express experiences and perceptions that are ingrained, and how they do it with honesty and in some cases, humor. S

"Thinking With Blood: Conflict and Culture in the American South" runs through March 9 at the Anderson Gallery, 907 « W. Franklin St. Call 828-1522.