Monet in the Bank 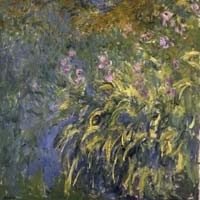 The art world's been abuzz since last month's sale in London of a Claude Monet water lily painting, "Le Bassin aux Nympheas," for $80.4 million -- a record for an impressionist painting. It had been expected to sell for half that amount.

Measuring more than 3 feet by 6 feet, the 1919 painting is considered one of the artist's most important late works. And although the purchaser isn't known, there's speculation the buyer is Middle Eastern or from the former Soviet Union.
A,ÿ
Closer to home, another large Monet painting from the same period, with a flowers-and-water theme, has been in the Virginia Museum of Fine Arts' collection since 1971 -- though it hasn't been on display in a few years. Matter of fact, the museum has five Monets, including the 6-foot-by-5-foot "Irises by the Pond." A,ÿThe other four are on display, recently rehung in the Mellon galleries.
Notable of those is a recent acquisition: "Le Pont d'Argenteuil/The Highway Bridge viewed from the Port."
"Monet painted this on the spot on a gray day," says Mitchell Merling, head of VMFA's department of European art, of the 1873 painting. "It is exciting because it shows his interest in industrial France -- not just rural France. It's an aggressive work showing an industrial artifact: Monet really was interested in the town's highway bridge and its railroad bridge."
While Merling doesn't mention it -- the museum doesn't discuss prices -- another Monet painting, "The Railroad Bridge at Argenteuil," sold at auction by a private collector in May for $41.4 million, the previous record for the artist's work.
Down in a storage area, amid other works waiting to be reinstalled after the $130 million renovation is complete -- in the company of a large Chuck Close portrait, a polychrome Roy Lichtenstein sculpture and a congregation of art nouveau furniture -- sits our "water lily." And although it isn't hanging and the lighting isn't great, the painting is a knockout.
"The scale is impressive," Merling says. "It has many levels of experience, but he doesn't work out a clear-cut solution. - He's being more experimental."
And how do you present this experiment when it's finally time to re-install it?
"It has to hang low," he says. "Otherwise it would be an icon rather than an experience."