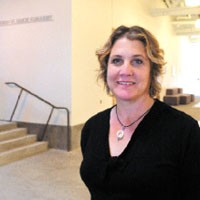 Style: Why did you come back to Virginia?
Huntoon: I was director of the collection at Old Dominion University for 12 years, vamped everything up and left academia to work in a small museum in Mississippi. Administration wasn't for me. When this curatorial job opened up, I jumped on it.

What are your big plans for the Visual Arts Center?
We have long-range plans here to get art education, community outreach and exhibition people working as a team — more integrated and to the point. There's a focus on media and the opportunity for other themes within — what challenges artists take on. We'll be looking for artists who speak through contemporary media rather than traditional craft objects.

What are your most expressive mediums?
Installation art is my forte — assemblage.

How will your Southern American influences on your master's degree from University of Mississippi be visible in your exhibitions?
What interested me was how uniquely isolated Southern culture is. I focus on the do-it-yourself artist … working outside the box, finding their own solutions and materials to express their ideas. That's Southern culture in my eyes.

How do you hope to have an impact on the visual arts community here?
I feel really lucky because the direction VAC is taking is incredibly exciting. It's an art school full of wonderful studios for everything. We're ready to bust it open. For me, this is a terrific vehicle for getting the exhibitions to impact the community through this art center. I've got my first show in January — “From Sand: Works in Glass,” which will feature works by three artists working with glass, neon and beads. — Roberto Curtis

The New Poster Boy of Philately

Mailing the fruits of your hard work to people all over the world is one thing. Having your designs on the actual postage stamps is something worth honoring.

Richmonder Glenn Crider, founder of NutcrackersUSA and TRC Designs Inc., garnered the respect of stamp collectors last week at Madison Square Garden at the U.S. Postal Service's annual Postage-Stamp Mega Event. The Postal Service selected four of Crider's handmade nutcrackers for its limited-edition holiday stamps. It was enough to bring the former clock repairman out of a production hiatus.

“I had said I was going to take a couple of years off [from production] to do some design work,” Crider says. “Guess that's going to change real soon here.” Crider, one of four American nutcracker makers, claims to be the only one who still does custom work.

Crider shares the stage with the Richmond Ballet Saturday, Nov. 8, during a special dedication ceremony for the stamps and the 25th anniversary of the company's annual performance of “The Nutcracker” at the Landmark Theater.

Richmond's Past: Finally on a T-shirt
The Valentine Richmond History Center, our city's official pack rat for the relevant, rare, bizarre and nifty, has forged a partnership with Henry, the sneaker boutique at 212 W. Broad St. where your childhood love of skateboarding was renewed (until you tore your ACL on that first attempted ollie). Henry's staff was intrigued by the eclectica in the Valentine collection after the center's June I Know Richmond event. So the staff went through the archives and found some cool stuff, postcards and objects, and has produced a line of limited edition T-shirts. The shirts and the items that inspired them will be on display at Henry during the next First Friday, Nov. 7, 8-11 p.m. The shirts will be sold; the inspirations, not so much. So finally, finally, street wear and Richmond history find common ground. 344-5315 or www.thehenrygallery.com or www.richmondhistorycenter.com.
— Brandon Reynolds

That Bunny with the Pistol Really Ties the Room Together

A new gallery has sprung up in the shadow of Green Front Furniture, that bastion of dinner tables and rugs in the heart of Farmville. It's the j fergeson gallery, and it may seem a bit out of place hanging around the big red brick warehouses of Green Front. Especially when it shows a lot of unconventional work by artists like Anna Cox, whose giant photos of weeks-old coffee are strangely compelling. Or Christopher Register, whose bird drawings sometimes incorporate the occasional human leg or, say, penis. Or David Dodge Lewis, whose big pastels bring together dinosaur skulls and tropical flowers.

But gallery owner Jarrod Fergeson balances the strange with the more conventional — dinosaur heads with bowls of tomatoes, or donuts. His idea is to appeal to the variety of tastes that might wander in, and to pick up the interests of those who come to Green Front from far and wide to outfit their offices. (Full disclosure here: Fergeson and I were roommates in college and beyond, so I've seen this philosophy of his flower since way before the doors opened.)

“Since we're the only commercial art gallery in town, I didn't think we could have a niche gallery,” says Fergeson. “So I wanted it be fairly wide and encompass a lot of different styles.”

Recently those styles have begun to swing Richmond's way. The gallery's first big show will feature the work of Adam Juresko, a Richmond artist who's collage work and paintings have appeared at Gallery5, the now-closed None Such Art & Apparel, and select bottles of Mountain Dew (it was a contest thing). This'll be Juresko's first stab at an installation — he's putting work on the walls, some on the floor, free-floating pieces. Juresko says via text message that he adds to his characteristic photocopy/paint collage work that installation, filling the gallery with “mass amounts of paper.” It should really give the Green Fronters something to think about. His show, “20 Eyes in My Head,” opens Nov. 1, 5-9 p.m. and runs through Nov. 29. A show by Ed Trask is coming in February. 311 N. Main St. in Farmville. 434-391-1066. — B.R.

www.songwritingcompetition.com
How do you get Tom Waits, Robert Smith and Weird Al Yankovic to sit down and check your music out? For seven years the International Songwriting Competition has picked the biggest names in the biz to be a part of its esteemed panel of judges, which run the gamut from jazz artists to rappers and big label presidents.
“It's one of the things that sets ISC apart from other competitions,” says its founder and director, Candace Avery.
Deadline is Dec. 1. Prizes include gadgets, instruments and hours of production and legal services, and $25,000. — R.C.