At least as useful as your anthropology degree.

Pescatarians on the fence are hereby advised to avoid painter John Bryan's traveling show, “Fish Market,” on display at Hanover Tavern and due to arrive in September at the Listening Room Gallery at Ashland Coffee and Tea. The way Bryan renders them, fish have personality and depth, in short an interesting, unique existence outside of the fried filet. Whatever questions they raise about the inner lives of fish, the paintings will benefit greater Richmond. Proceeds will be donated to “help strengthen arts and culture” in the region, Bryan says. www.richmondcultureworks.org/FishMarket.aspx.

At Least as Useful as Your Anthropology Degree
Check it out now, the funk's your alma mater. Or at least it could be. Bootsy Collins, bassist in James Brown's band and Parliament-Funkadelic, has founded Funk University and is accepting applications from amateurs eager to hone their George Clinton covers for the inaugural year of classes, which begins July 1. Guest professors include Les Claypool of Primus and Victor Wooten, a five-time Grammy winner. No word yet on Funk U's accreditation status, but you can eyeball the Web site and guess it's just as legit as any of those other purely online outfits, the names of which are meant to evoke old-world, not virtual, forests or glens or something. Perhaps we ought to not take out massive loans from Sallie Mae for all this. www.thefunkuniversity.com. 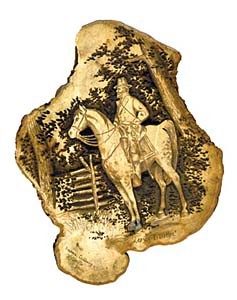 Dear Diary, What the Hell
The past, if not totally obscure, is often inscrutable; just try making sense of those journals you kept when you were 13. It's likely curators at the Virginia Historical Society did a similar bit of head-scratching when they, sieving through their stash, uncovered a scab taken from an infant suffering small pox circa 1876, as well as a bit of fungus carved at some unknown date in the image of Robert E. Lee (pictured) and a package of Junior Partner cigarettes, which bears the image of a child, presumably one who enjoyed the sophisticated taste and aroma of unfiltered smokes. Now those curators have put all the weird artifacts on display at once. Just thank your creator that your own scribbled yearnings of long-ago aren't included. “Bizarre Bits: Oddities from the Collection” will be displayed through Feb. 13. www.vahistorical.org.

On Hamilton, Dawson's Creek and Drama Geeks
Teenagers, unafraid as they are of big themes and self-revelation, must make for interesting theater at least as often as they do dramatic shouting scenes 'round the fountain at Short Pump Town Center. And like those scenes from the mall, all these performances are free: July 2 and 3, the School for the Performing Arts in the Richmond Community, known as Sparc, presents New Voices, eight new plays written by high-school students from across the commonwealth. Go to the school's center at 2106-A N. Hamilton St. or get information at 804-353-2293, ext. 227.