The Martin Agency opens an art gallery. But only its employees can see it. 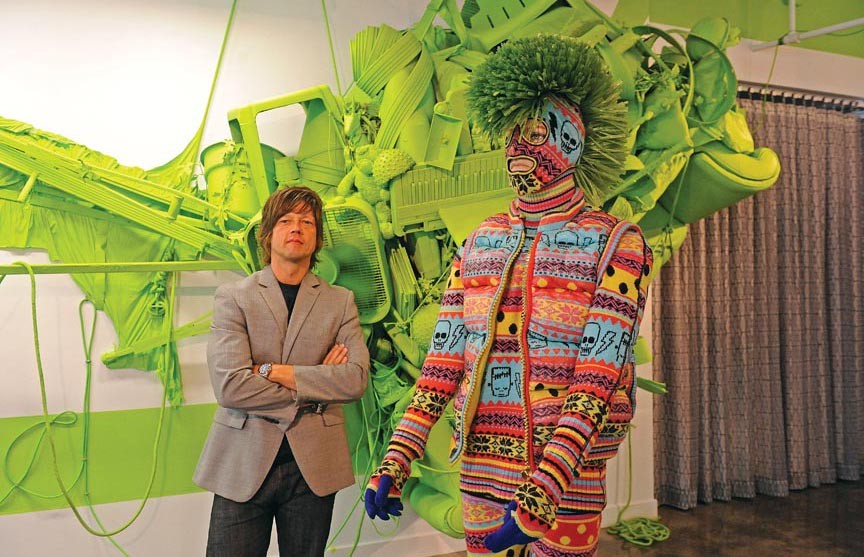 The Martin Agency has always touted its role as an innovator, and at least in the realm of employee break areas, the Shockoe Slip-based ad agency easily has surpassed the status quo.

If you hang a left at the company's front desk and walk up the stairs, you'll find yourself in the middle of a new employee art gallery — or at least where one will be June 22. Now it's still filled with a gigantic television, a long table with 14 chairs and one early arrival: a neon green collage of miscellaneous items such as soccer cleats, fans and electronic keyboards.

In a few days this space will be filled with the work of eight artists from around the world. Titled "Re:" and curated by Heather Russell of Russell/Projects, the first exhibition at the space will focus on the effect of social media on society. It's an interesting thematic choice, given that the gallery won't be open to the public. That could change as certain pieces come up for sale. For now, Martin spokeswoman Mary Katherine Rordam says, "It's meant for employees and to inspire our work."

The idea for a private, employees-only art gallery came from John Norman, chief creative officer for the agency. Under Norman, the agency renovated this space, taking down cubicles and replacing them with tables and other work areas.

"John is very visually based," Russell says, pointing to an ad pitch on the far wall for a prospective client. "[Because of Norman] it's much more of an open think tank." He made it a priority for the furniture arrangement to work with the new art.

"We wanted to change the way we worked," Norman says. "It's really meant to inspire us. What we do is an art form."

The first show, "Re:" will have its June 22 opening by invitation only. One of the featured artists is Erin M. Riley, who weaves tapestries of embarrassing photos from the Internet. One of her participating pieces is titled "Kegstand" and shows a young lady in a bikini doing just that. Another featured artist is Peter Eudenbach, an associate professor of art at Old Dominion University. Eudenbach took a modern Danish coffee table and reworked it so that it could brew two gallons of coffee within the table itself.

"In ad agencies the visuals are always aimed at a targeted audience," Eudenbach says. "It's pretty commendable for an ad agency to devote that amount of space to it." The artist agrees it's pretty rare for a company to do this kind of thing just for its workers. He points out that Pixar has a recreation room "but that's usually a Ping-Pong table or a cereal bar."

While advertising people scurry around to make deadlines in their designer casual wear, Russell points to the new gallery as just another way the agency is ahead of the curve.

"I think it's what makes Martin Martin. It's what makes them the number one ad agency in the country," Russell says. "I don't think anyone else in the world would even think to do this." S