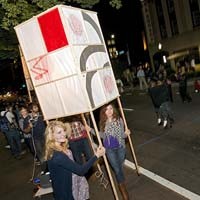 The lights were on but no one was home at InLight 2009. Estimates by event organizers say the Sept. 25 show, which features artwork based on the use of lights, attracted between 4,000 and 6,000 visitors — matching and even exceeding the crowd from last year's successful debut installment of the art installation.

An informal poll by Style Weekly canvassing artists, vendors and attendees found the numbers were dramatically lower than official counts.

The difference was simple: Last year's InLight was held during the monthly First Fridays Art Walk; this year's wasn't. “I don't know why they didn't keep it with the regular art walk,” said one exhibiting artist, who asked to remain anonymous. “The majority of people that I knew were assuming that it would be held on Broad Street.”

Sources say this year's plans were altered by the 1708 Gallery's board of directors to promote the new performing arts center, which fronts on Grace Street.

“Last year, the event felt festive, it felt natural, the layout was intuitive and it was easily accessible,” Jeremy Parker says. “It was during the art walk last year, so it was like a souped-up First Fridays.” Parker volunteered this year to lead the 7:30 p.m. lantern parade, an important feature of the InLight show, and is blunt about the audience estimates: “That is horseshit. There is no way that there were that many people.” He estimates that the crowd total didn't break a thousand people.

The Richmond Police Department no longer gives crowd figures for festivals, so how were the InLight 2009 numbers computed? “The number of program guides distributed is a reliable metric,” explains Tatjana Beylotte of 1708, which organizes InLight along with corporate sponsors. She says 2,400 program guides were distributed, a figure rounded down to 2,000. “[A] reasonable multiplier was that we gave one program to every two to three people. That is how we came to the 4,000 to 6,000 estimate.”

Twenty-six local, national and international artists participated this year. It's worth noting that many of them received complimentary goodie bags with dozens of InLight 2009 program guides stuffed inside.

Lucy Meade of Venture Richmond, the co-chair of InLight 2009, says that the mission was to “create an extra event for downtown” and that moving the event to CenterStage was necessary not only for the event's long-term growth, but “to reintroduce people to that neighborhood. … A lot of people haven't been down there to that area in a long time.”