Cheryl Goldsleger will suck you into her complex, three-dimensional works. 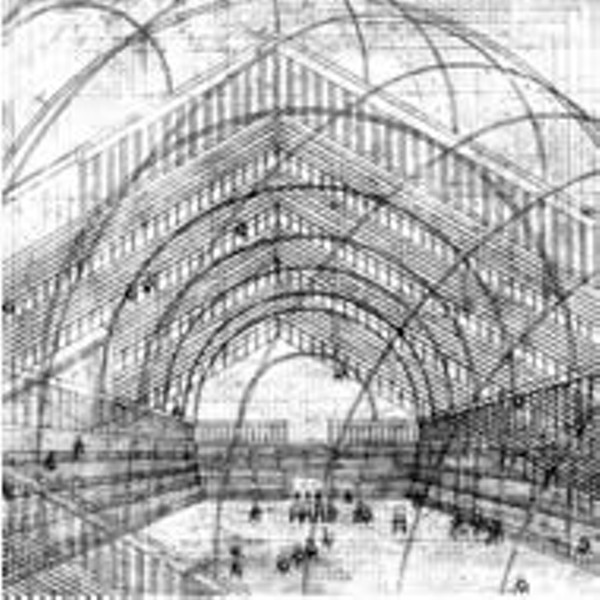 And at first glance, there is a certain coolness to the works because there is no direct human presence in the pieces.

But linger a bit longer. Something powerfully different begins to emerge. In spades.

After a few minutes' examination, Goldsleger's works become multilayered, and in some ways, exceedingly complex. Her palette emerges as achingly rich in tones — honey bieges, walnut browns and ebony. And perhaps most importantly, the pieces reveal layer-upon-layer of art historical references — particularly from the ancient Middle Eastern, Greek and Roman eras as well as the Italian Renaissance.

And because she embeds her works with these references, something strange starts to happen: Despite the lack of the human figures, the works and ideas of the great humanists, mathematicians, artists and architects of the past are indirectly present in her works. It's as if historical figures are looking over our shoulder. It is hard to look at Goldsleger's "Overlay," a targetlike image, and not think of Vitruvius, the great Roman architect and author, and his "Vitruvian" man with outstretched limbs. Joseph Paxton, the British landscape architect who pioneered prefabricated construction techniques with London's Crystal Palace in the 1840s, comes to mind when viewing her piece titled "Collection"—a large interior space with a latticed ceiling. And more recent artists, such as Jasper Johns and Patrick Caulfield (the British "pop" painter of spare, stylized contemporary interiors) might also have inspired the graphic thread that runs through all pieces in the exhibition.

But the pieces in Goldsleger's show, which she has developed during the past five years, could only be late-20th century and turn-of-the-21st century. There is a mathematical precision and complex multi-dimensionality that could only be charted with computer assistance. "Divert," a square work (and one of the more recent in the show), is a circle with a labyrinthlike matrix. It emerges, however, as a bird's-eye view of the Roman Coliseum. While hardly literal, the piece brings to mind tiered seats and the underground maze of passages and holding areas where gladiators and wild beasts awaited before satisfying the insatiable appetites of the masses who were waiting above.

"Collection," one of Goldsleger's more complex works, evokes a sports arena or gymnasium with a suggestion of bleachers along the walls. But not really. Perhaps this space is more prisonlike — are those tiers leading to prison cells? To make things more interesting, the spaces are scattered with empty folding chairs that give the sense that something has happened here. But the absence of human figures suggests a sense of loss. In this work, in a bravura tour de force, Goldsleger overlays a series of drawings that establish at least five vanishing points. Looking at "Collection" is like viewing an Escher drawing — we're not quite sure where to look first, or if we have really ever seen the piece, once we have finished looking.

While the love of architecture and three-dimensional space has obviously inspired Goldsleger, her work never approaches the feeling of an architectural rendering or a blueprint. The depth and sensuality she achieves with her warm, almost golden, waxes gives them a glowing quality and a sculptural depth. So even without the historical reference points, viewing her works is a rewarding and deeply satisfying aesthetic experience.

As anyone who has ever been jostled by crowds at a blockbuster museum exhibition or, conversely, enjoyed being alone in a museum with a favorite work of art for an extended period of time can attest, each gallery experience is different and important. The 1708 has never looked better than it does with this show. Goldsleger's work seems to have been created especially for this commodious space with its rich, refinished maple floors and broad expanses of icebox-white walls.

To experience "Improvisations" is to marvel at craftsmanship, be transmitted to spacial experiences and be sucked, willingly and gloriously, into a historical vortex.

It's a powerful experience. S