Art and Soul on Screen 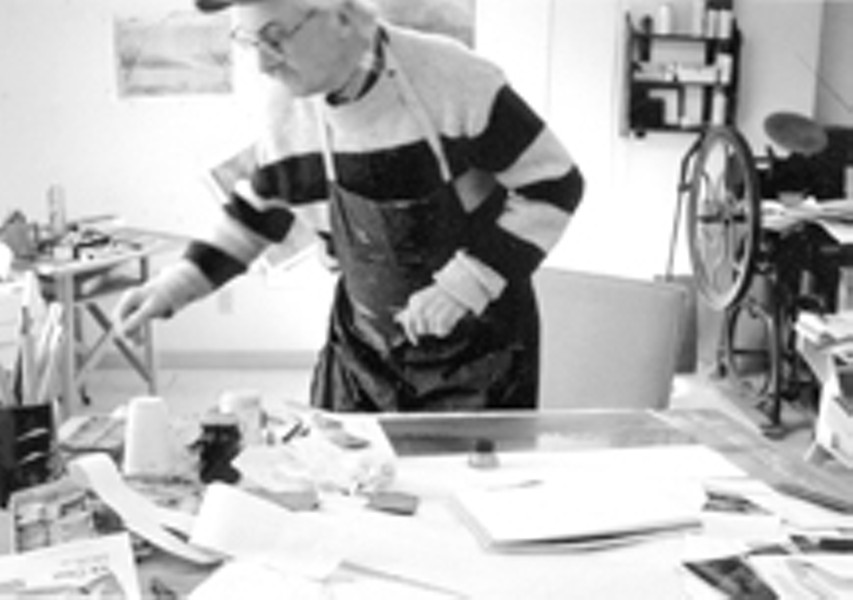 First shown at the Virginia Film Festival in Charlottesville last October, “Long Art” makes its Richmond premiere this weekend as part of the 11th annual James River Film Festival. Williams, who teaches at Virginia Commonwealth University’s photography and film department, has previously screened his films “Lillian” (1993) and “Thirteen” (1997) at the festival, both of which have gone on to critical acclaim. “Lillian” won the Award of Distinction from the Sundance Film Festival in 1993, and “Thirteen” helped Williams snag the Movado “Someone to Watch Award” in 1999.

For “Long Art,” Williams turned the camera on the lives of fellow Richmond artists — painter Bill Fisher, printmaker David Freed and multimedia artist Amie Oliver. The result, according to James Parrish, the festival’s co-founder, makes for an exciting and insightful film.

“What’s interesting is seeing how they all work very differently,” Parrish said. “You really get inside the lives and minds of the artists.” For the artists, however, such a thorough examination may have occasionally been too close for comfort.

“It was weird having the camera there,” said Freed, who missed not being able to listen to music while working. “It was not the most natural way to work.”

Oliver agreed that the lack of studio music was the biggest drawback of the filming process. “I learned that sounds, light and copyright issues are all concerns … even in a documentary film!” she said. However, Williams’ “fly-on-the-wall” approach quickly put them both at ease, they said.

“David is so quiet and unassuming,” Oliver said, “I could almost forget he was in the room during the filming process.

“Ultimately, it is an intense experience,” she says, “sharing the other side of the canvas with the rest of the world. Art and life go on, and the camera sees it all.” — Hunter Hackett

“Wattstax” was marketed as a black “Woodstock,” but that’s not doing it justice. While the Afrocentric 1973 documentary does share surface similarities with its more celebrated 1970 rock ’n’ roll counterpart, there are clear differences from the outset. The flighty, shaggy rockers arrive at their rural New York farmland stage in helicopters, for instance, while the soul and funk stars of “Wattstax” pull up to their hot, urban dance party eating soul food in the backseats of limousines.

And even with Sly Stone and Jimi Hendrix on-hand, a contemporary viewing of “Woodstock” can seem about as exciting a three-hour Rotary Club meeting. What that concert doc obviously needed was Richard Pryor and a lot more soul. “Wattstax” presents all of that — plus Isaac Hayes, the Staple Singers, Johnnie Taylor, Albert King, et al. — and remains 100 percent Sha Na Na-free. Stoned hippies slipping in mud don’t frame the musical highlights, instead we get potent inner-city snapshots of an emerging “Black is Beautiful” movement and biting humor from the young, untamed Pryor.

Originally subtitled “The Living Word,” the intriguing, long-lost docu-musical will screen at Plant Zero on April 3 as part of the 2004 James River Film Festival. Director and producer Mel Stuart will be on hand at the 8 p.m. showing to (hopefully) answer burning questions about his unique film, which will be released on DVD later this year. Questions like: How much money was budgeted for Afro Sheen? What made Jesse Jackson think he could wear something like that in public? Why is the bartender from ‘The Love Boat” demonstrating a soul handshake? How could the same director who filmed “Willy Wonka” also make this? And why isn’t there more Rufus Thomas?

Ah, Rufus. Even if its remaining running time consisted of Robert Goulet interpreting the Chi-Lites, you’d still need to see “Wattstax” in order to tell your children’s children that you witnessed the wrath of Hurricane Rufus. The white-booted, baldheaded Thomas delivers a show-stealer for the ages, from his first bit of stage patter (“Ain’t I clean?”) to the final polyrhythmic cluckings of a tail-shaking “Do The Funky Chicken.” This may be the funkiest performance ever committed to celluloid — and we’re not talking Crispin Glover-funky.

Overseen by Stax Records, then one of the nation’s prominent African-American-owned labels, proceeds for the one-day August 1972 gathering (which drew 100,000) went to area hospitals in the beleaguered L.A. community of Watts. “At a dollar a ticket, the seven-hour music fest was the best deal in town,” the film’s original production notes proclaimed with pride. Alternating hot Coliseum highlights with humorous and touching interviews from selected “brothers and sisters” — the beauticians and thrift-store owners, pimps and street performers of Watts — “Wattstax” is a time-capsule candidate that still engages ears and backsides.

We can blame The Man and copyright hassles for the film’s subsequent obscurity, but its soundtrack would emerge as much-sampled source material for the likes of Public Enemy (“Don’t Believe the Hype”), 2Pac (“When My Homie Calls”) and De La Soul (“Plug Tunin’”). Now Stuart’s power-fisted documentary is enjoying a deserved rerelease in selected cities with its original excised finale painstakingly restored — an unseen-for-30-years performance of “Theme From Shaft.” Forget about the brown acid, baby — this is black power. — Don Harrison

On April 4 at 3 p.m. the James River Film Festival will show “Long Art” and host a discussion afterward with director David D. Williams at Plant Zero. Admission is free. The work of “Long Art” artists Amie Oliver and David Freed is on exhibit at the Rentz Gallery through May 4; Bill Fisher’s work is on display at 1708 Gallery until May 1; and Curated Culture is showing Esther E. Motz’s work through May 1. Motz died immediately after graduating from VCU’s School of the Arts in 2000, and her work is also featured in the movie.

On April 3 at 8 p.m., the festival will show “Wattstax” and host a discussion afterward with director Mel Stuart at Plant Zero. Tickets cost $5 and include an after-movie dance party with NRG Krysys.