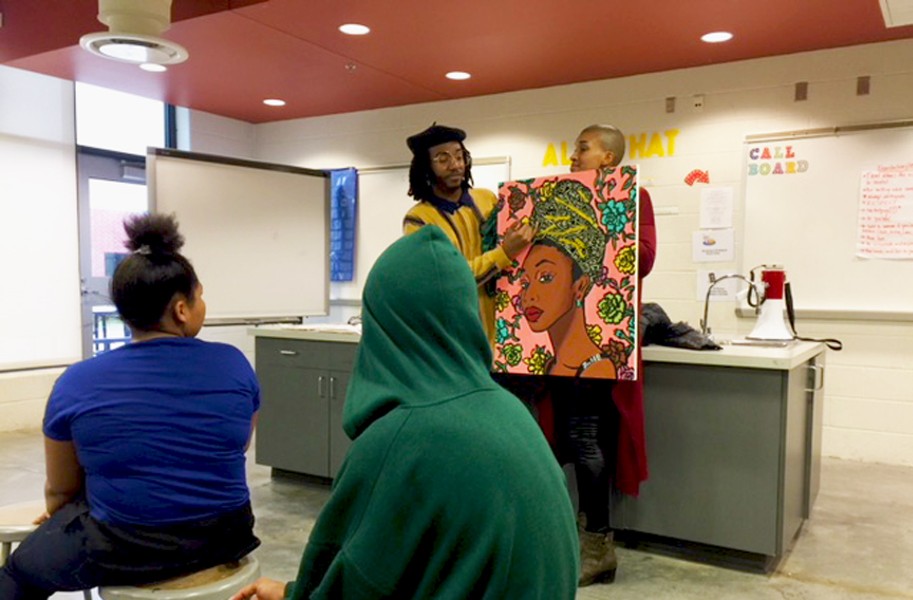 photo courtesy Art180 On Saturday, April 28, young people from around the city will be involved in a free event showcasing their visual and performance art from various afterschool programs offered by the nonprofit Art 180.

Justice Elder's favorite art teacher was Kate Duffy. She told him that the nonprofit Art 180 was taking proposals for afterschool programs.

After submitting a proposal for the spring session, Elder found himself teaching a dozen 11- to 14-year-olds every Tuesday at Martin Luther King Jr. Middle School along with fellow artist Lotus Lee as part of a program Portraits of the Soul: Learning the Beauty of Afro-Pop.

Since the it was about portraiture, Elder began by asking students if they'd seen people who look like them in paintings when they'd visited museums or galleries. Few had. The aim of the class, he told them, was to fill the void in terms of what the students felt needed to be represented.

When one student suggested a portrait of a unicorn instead of a portrait of a person, Elder was curious about her motivation. "She told me that you don't see unicorns in paintings and they need to be represented," Elder says. "I told her to go for it. I want them thinking about what they think needs to be out there and creating that."

The labors of that 13-week class, along with the work created by a dozen other afterschool programs, all with different themes, will be on display at Art 180's annual festival, the Really Big Show.

The first Really Big Show celebrated Art 180's fifth anniversary and concurrent move into its longtime home at Plant Zero, milestones the group felt deserved an event that would bring its young people together to showcase their work to each other and the community. Once Art 180 moved into its home in Jackson Ward, the event moved outside to Abner Clay Park. This year, it will be held at the Science Museum of Virginia.

According to program director Taekia Glass, the free family-friendly event is geared to the entire community with art activities, food trucks, a closing live performance by reggae band Mighty Joshua and an art show that spotlights the spectacular talent of more than a hundred y
oung Richmonders.
"It's an opportunity to show some support for young people who've been working really hard individually and collectively and are now sharing an intimate part of themselves," Glass says. "We feel it's important for our youth to know that people do care for them even when they don't know them."

The weekly class led by Elder begins with Lee leading the students through a series of movement and dance as a way of "getting the wiggles out." They're introduced to artists of color — such as Kehinde Wiley and Alim Smith — as a means of inspiration and widening their understanding of what a portrait can be. The students' portraits are being done in acrylic paint on canvas, but many feature other materials such as fabric, faux fur and artificial flowers for texture. The young people seek to capture the essence of subjects like activist Angela Davis, singer Amara La Negra and civil rights leader Martin Luther King Jr.

Part of the goal of exposing the students to art they haven't seen is to combat the perception that portraits have to be representational and realistic.

"Once they see that realism isn't the only way to do art, their eyes are opened to what art can be.," Elder says

"It's a chance for young people to show their work and speak about their work and that's very validating for them," Glass says. "It teaches them that they do matter."