Around the House: Moving Misery 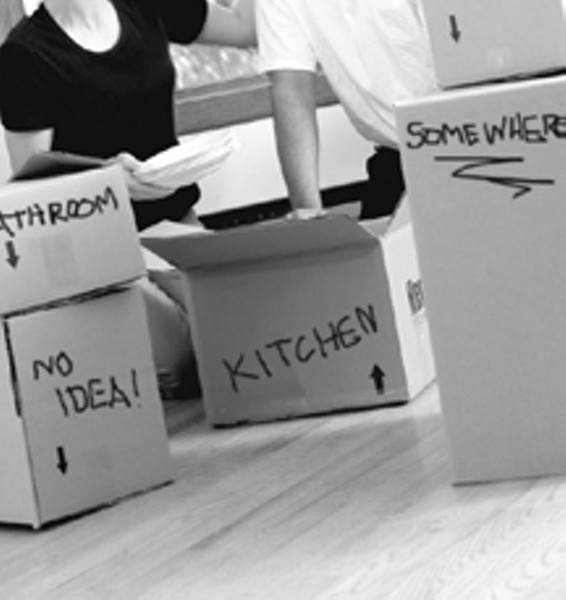 Let's start with packing. It is helpful to have a number of tools on hand, such as a razor, knife and/or scissors, bubble wrap (to keep the kids busy) and packing tape (in case the bubble wrap doesn't work).

Caveat: The decision whether to have a razor, knife or scissors on hand should take into account how the move is going and the mood of your spouse. I think you get my point.

As you pack boxes, label them with their contents and the room they belong in. This worked great for us. Eight years after our last move, we still have 35 full boxes in the garage marked "No idea" and "Somewhere."

Keep safety in mind when you move, especially when dealing with the infamous fold-out couch. A fold-out couch is 750 pounds of finger-severing furniture that shifts and slides around like a live shark in a crate and requires advanced calculus to fit through a doorway. All this just so you have a sleeping place for your old college buddy who can't seem to go out on "guys' night" without rendering himself incapable of driving his own smelly self home.

The danger is compounded in my family, where we like to say that "the boss always walks forward" when two people are carrying a heavy item. I don't know why we say that. But the result is a dangerous, high-stakes power struggle over every heavy item as each person jockeys, spins and maneuvers to avoid ending up walking backward.

It's a good idea to move on a weekday, if possible. Banks, utilities and government offices are open, and marriage counseling is available from experienced therapists rather than from the rookies who get stuck with weekend duty.

Of course, the trickiest part of moving is getting the timing right between selling your old house and buying your new house. Making the leap at just the right moment is like trying to jump from a boxcar in one moving train through the open door of a boxcar in a train speeding in the opposite direction. You might time it just right and make the jump unscathed. But it's pretty darn unlikely.

More likely are two other scenarios. One: You sell your old house before you buy your new one, forcing your entire family temporarily into a cramped apartment flanked by five frat boys and a biker-bar bouncer as your neighbors. Or two: You buy your new house long before you can sell your old one, scoring the retirement-savings-eating double mortgage. In either case, you end up with an extraordinarily unhappy family and about as much negotiating power as Bill had with Hillary after Monica.

When it's all said and done, I must in good conscience leave you with one final tip for moving: When it comes to moving, don't.