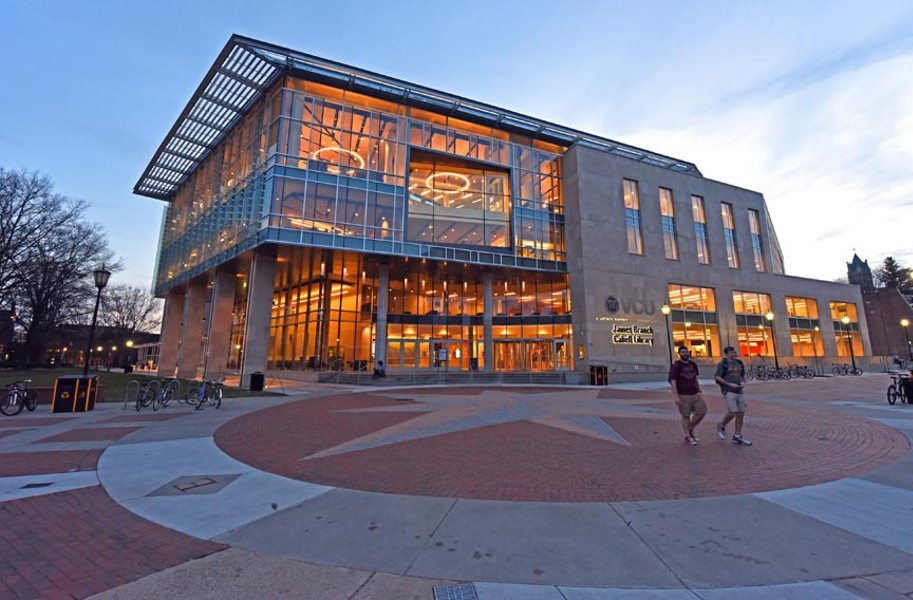 The $50.8 million, 93,000-square-foot addition, being dedicated this week, is a worthy counterpoint to the adjacent and architecturally sumptuous Cathedral of the Sacred Heart. But it’s also the most recent example of a long-time university tradition: Adding onto existing buildings and in-filling gaps of the tightly configured urban grid, as precious space and financial resources become available.

This tradition dates to 1925, when the 8-year-old institution moved from downtown to the once-fashionable residential environs of Monroe Park. In 1925, the fledgling school, later named Richmond Professional Institute, acquired the three-story mansion at 827 W. Franklin St. and retrofitted it to accommodate students, faculty and administrators. The building is named Founders’ Hall today.

The former stable in the rear was converted into a gymnasium and used for art studios, and currently serves as the Shafer Street Playhouse. Directly across Shafer Street, now a pedestrian mall, is the former Lewis Ginter house. In the 1920s it had become the Richmond Public Library and the school’s de facto library. When the library was moved to grand, new art deco quarters downtown, the school purchased the sprawling old house and converted and enlarged its rear service buildings for institutional use.

This brings us to the origin story of the glorious and contemporary Cabell Library building. In the 1930s, the Ginter house stable was converted into the RPI library. Finally, some 40 years later in 1970, the VCU library moved to a new, one-story, brutalistic, big-box-store-looking facility that occupied the entire block defined by Park and Floyd avenues, Cathedral Place and Linden Street. In 1975, this was expanded to become an even larger four-story, prefabricated box. But the student population grew to 31,000 and its holdings to 2 million books. VCU had the untenable distinction of being the state’s most underserved university in terms of library space per student.

So in seeking to “grow” the library, the university faced its perennial challenge: How to expand on such a tightly configured footprint? At Cabell, the solution rested with a trapezoid-shaped piece of leftover land, which had served as a recessed loading dock and parking lot along a stretch of Park Avenue, now closed to traffic.

What the expansion accomplishes, masterminded by Shepley Bulfinch Architects of Boston, is not just another make-do wedgy, but a bold architectural statement. The new Cabell is the first building in the Monroe Park campus’ history — and there have been many in recent years — to serve as a significant architectural unifier.

Thus, the new library becomes an instant landmark, providing a strong axial focal point at the southern terminus of Shafer Street while addressing Park Avenue and Cathedral Place. Yes, the new building respects the cathedral’s beaux arts glory, especially with its tan-hued, cast stone facing, but makes its own bold statement by being, in essence, a multilevel glass pavilion — a once and future crystal palace of knowledge, if you will.

Because the addition is largely encased in clear glass, its lightness mitigates and balances the brutal aggregate surfaces of the older structure to which it is attached. And being glass, it’s an inviting space that all but sweeps passersby off the Compass, an outdoor, spokelike plaza at the foot of Shafer Street, and into the building. 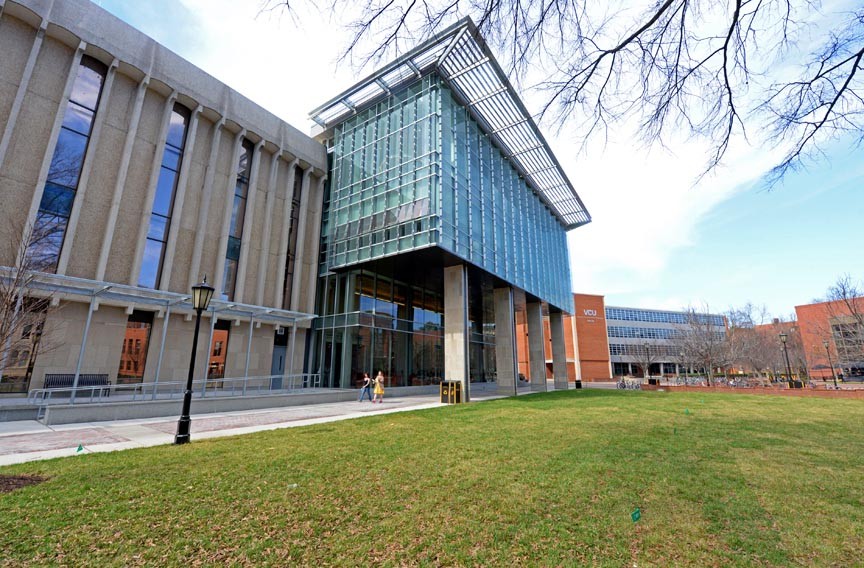 Some have likened the L-shaped lobby to an airport terminal and I wouldn’t disagree. Despite dramatic purple walls and the use of wood here, the rewards come as you get deeper into the building. Virtually all of the new spaces are informal in spirit and designed for study and interaction. There is nary a book or publication in sight. And with literally a thousand additional seating spaces, the colorful mix of high-style contemporary desks, tables and chairs becomes overwhelming, if not Dr. Seussical.

Yes, the books are still there, but the unrelenting stacks are now consolidated in the original building. Happily, the transition between the old utilitarian spaces and the more exuberant, interactive new spaces is seamless.

The wow moment architecturally occurs on the fourth floor during daylight hours. This is within the glass doors of the graduate and faculty research center. Instantly one of the city’s most spectacular interiors, the room is thrilling to experience. The L-shaped space is given form not by solid walls, but by large windows that frame vistas of the surrounding collegiate and ecclesiastical environs. Overhead, five delicate, circular neon lighting fixtures serve as unlikely sculptural anchors. Brilliant.

And if the new Cabell is pavilionlike, such building types work best in sylvan settings. The open space along Cathedral Place, once cluttered with an overwhelming canopy of foliage, has been turned into a lawn, leaving a cluster of trees at the south end near Floyd Avenue to soften the impact of a major campus bus stop there.

The broad, adjacent sidewalk leading to the student commons is now a promenade made significant with the addition of a one-story, metal pergola that hugs the original library. This skeletal structure links the spirit and materials of the new addition with the most prominent wall of its brutal ancestor to soften the latter.

The new Cabell Library is bold architecturally and welcoming. Arriving as it does during this season of March Madness gives VCU, in addition to its beloved and feisty Rams, an essential and academic point of pride. S