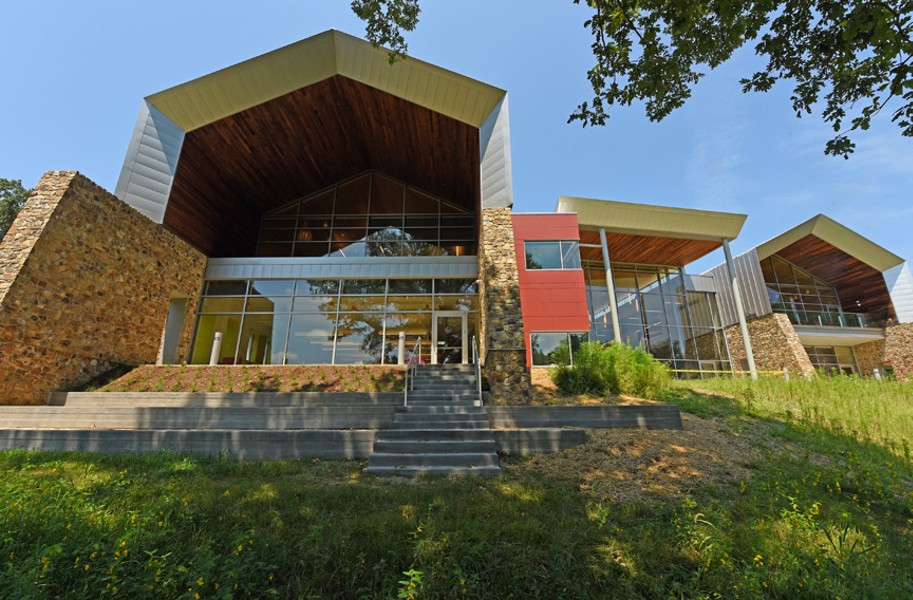 Scott Elmquist A view from the back of the beautifully-designed Varina Library reveals a project that contains thrilling spaces both inside and out.

More than a decade has passed since Henrico County voters passed a $350 million bond referendum. But as the years passed, and project after public works project came to fruition, the highly anticipated replacement of the diminutive 6,000-square-foot Varina library languished at the bottom of the list.

Well, the wait is over. The 44,000-square-foot, $28.1 million library was completed in June — it’s eight times the size of the old facility, and the final bond-financed project to be built.

And boy, it is cause for celebration. If the architectural design of the sprawling building reflects and embraces its surroundings in ways that border on poetic, why not? It is a library.

The two-story complex at 1875 New Market Road, or State Route 5, and near Pocahontas Parkway, also is a welcome and needed third space. Unlike homes or a workplaces, third spaces are destinations we visit for relaxation, pleasure or community interaction.

Such places may be taken for granted in many parts of populous Richmond, or in western Henrico with its broad selection of coffee bars and eateries, a gargantuan destination mall and the Cultural Arts Center at Glen Allen. But in Varina, which is experiencing the slow transition from farmland to suburbia, options have been all but nonexistent for getting out of the house and finding public places for meaningful social activity and thoughtful community discourse.

You may be thinking, aren’t we talking about a library here? Yes, but the time is long past since the books and archival treasures were relegated to daunting, thick-walled buildings with classical embellishments and “Shh!” signs posted throughout. Information is channeled from cyberspace and increasingly we curate our own pathways to knowledge.

The new Varina library is a place where minds and spirits can soar because of how space has been both harnessed and liberated. Yes, there are specific, well-delineated and handsomely furnished areas for children’s, teenage and adult reading and computers, including a digital media lab with a 3-D printer. But it’s how the interiors are designed and aligned — to allow natural light and views of the surrounding woodlands — that gives the place the welcome and warmth of a mountain resort lodge.

The team of BCWH Architects of Richmond and Tappe of Boston acknowledged and fully embraced the 22-acre site, which consists of a field that leads to the edge of a hillside, sloping to a wetlands area.

Visitors may arrive by vehicle or bicycle. The library is directly across the road from the popular Capital Trail bike path and pedestrian way. They are met at the front traffic circle by a huge oak tree that’s set off in the turnaround to establish it as a kind of tree-of-knowledge icon.

From the south side of this cog, the library building itself splays out like three thick spokes. These extensions lead to the grassy hillside and gesture toward the woods beyond.

If there’s something familiar about this extended, modernistic building, there’s a reason. It references Southern vernacular rural architecture. With its generous sheaths of metal rising slightly to a pitched roof, it suggests an elongated horse barn or commercial chicken coop. The look is neither rustic nor industrial, but somewhere in-between.

Patrons enter through the center of the building’s three spokes. Inside the lobby with its colorful walls, the directional flow announces itself by way of large door openings and graphics that guide you toward the right for the children’s and young people’s areas, and to the left for the general collection and periodicals.

Those continuing straight ahead toward a huge glass wall arrive at the top of an amphitheaterlike space. Here, a series of wooden platforms and steps lead down to the ground level. Glass doors open directly onto a terrace where comfortable outdoor chairs await those wishing to read or just sit and stare at the woods beyond.

An important part of the well-integrated outdoor landscape plan is a series of pathways. And the most thrilling view of the new library awaits those who venture down the path to the bottom and look back up at the library.

From this vantage point the three spokes become three distinct but connected shedlike structures, each with a dramatic extended roof. The rusticated bases of these extensions are faced in natural stone. It’s masterful how the building seems to rise organically from the earth.

It is reassuring and altogether fitting that Henrico County and its librarians and architects created a structure that connects so beautifully with its setting. This isn’t just any 22-acre tract of land. It’s where Native Americans walked for centuries. It’s a short distance from the James River, where the Europeans and Africans first penetrated the continent in the early 1600s. And nearby in the 1860s, intense and horrific military activity occurred during the Civil War.

So while there are books to be pulled from the shelves and computers to be pecked, this colorful new library accomplishes what all thoughtfully designed buildings should do: better connect us to our communities, sometimes in unexpected ways. S