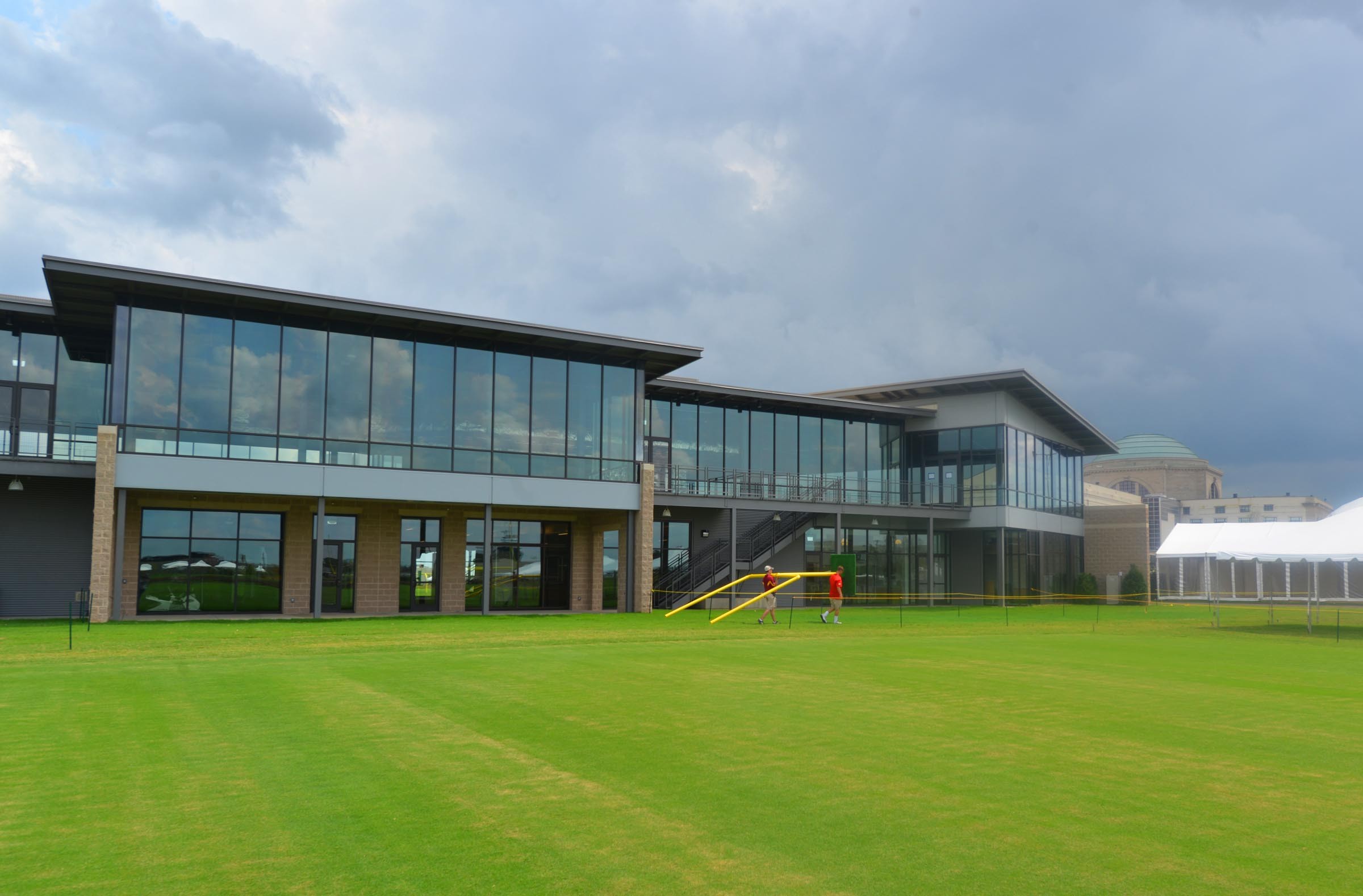 The miraculously swift transformation of 15 acres along West Leigh Street, from ill-kempt no man's land to sleek sports facility, has opened up fresh new vistas in this part of town behind the Science Museum of Virginia.

From the Bon Secours Washington Redskins Training Center, these views are especially dramatic from the second floor of the 50,000-square-foot training building, a glass-encrusted, pavilionlike and understatedly elegant structure.

Looking westward, your gaze embraces the Children's Museum of Richmond, the Interbake factory, which is being repurposed as an apartment complex, the Seaboard Building, Movieland and The Diamond. Looking east, you see a distant lineup of downtown high-rises. To the south is the architecturally distinguished Science Museum of Virginia.

But for the next three weeks it won't be cityscapes that fans and the curious — a projected 10,000 daily — will flock to see. They'll have cameras and pen and paper at the ready while sweaty players move through their pre-season paces beneath Richmond's unforgiving summer sun.

This is a new chapter in this site's long history. During the 19th century it was a family farm, the Hermitage, and later, a fairgrounds. Serving as a training camp during the Civil War, it accommodated as many as 5,000 troops at a time. On April 3, 1865, with the fall of Richmond, the Union's 28th U.S. Colored Troops marched down Broad Street and encamped at the site. The next day, President Abraham Lincoln, inspecting the former Confederate capital, arrived by carriage to visit his soldiers. Post Civil War, the grounds became a racetrack and a beer garden. And a century later, imbibing continued here as folks cruised West Leigh and DMV Drive to preen, park and hook up.

The $10.8 million Redskins training center, however, is family oriented. It was designed by 3north Architects, with the Timmons Group as civil engineer and landscaper, and Hourigan Construction as the contractor.

The complex is divided into four distinct areas lining West Leigh, a handsome, tree-lined street that previously served mostly as a road connecting the Boulevard with the Carver and Jackson Ward neighborhoods. Visitors will enter the training center from the east, where Leigh and DMV Drive intersect. An impressively landscaped surface parking lot is set back from the city sidewalk behind a grassy median and low metal fence, with parking reserved for those with business in the building.

Just west of the parking area is the low-slung and sprawling new two-story, unabashedly modernistic building, set perpendicular to Leigh. The first floor reads as a podium for the glass-enclosed floor above. Its dark beige, concrete-block outer walls are given a hint of rustication by the intermittent injection of lighter-colored blocks.

You enter the building under a gently slanted canopy. The modest-sized lobby is undistinguished except for a glimpse of a playing field through a doorway on the far wall that's on axis with the front door. The lobby walls are painted Redskins maroon. To the immediate left of the lobby is a Bon Secours sports medicine and primary care facility, which will be open year-round. Deeper in the building are Redskins training and fitness areas. A staircase and an elevator near the entry lead to the second floor.

This second floor, the glory of the handsome building, is a thing of expansive and beautiful transparency. Its high outer walls are lined with double-paned glass. Three designated areas await future tenants. Two open balconies on the building's west side overlook a drill and twin practice fields.

The training complex's third area can be described in one word: turf. Two football fields are set side by side and run parallel to West Leigh. The lawns are so unrelenting that four yellow goal posts almost serve as abstract sculptures.

Finally, the westernmost part of the center is an attractively landscaped, 2.5-acre park that features a three-tiered, 500-seat amphitheatre. Not symmetrical like the Romans would have built, the open theater has irregularly placed risers that meld naturally into recently shaped earth berms. Birch, maple, cypress and dogwood trees have been sacked in for foliage. This area is especially designed for children and families and is adorned with colorful banners.

The sequence of the complex's four areas corresponds with how fans will experience the place.

They'll enter on foot from DMV Drive and follow a sidewalk that skirts the parking lot. Then they'll pass the south side of the building along a broad, crushed cinder roadway. If they look up, they'll see that the building's roof, flat for most of the training building, tilts slightly at this point as if saluting the grand John Russell Pope-designed Science Museum nearby.

Visitors then move out onto the expansive practice fields. Using adjustable rope lines for crowd control, viewers will be allowed to stand as close as feasible to the players. The amphitheatre and park are just a short walk beyond the practice fields.

If it's remarkable how quickly the complex was built, my bet is that people also will be struck by how this development enhances the West Leigh corridor. While its dense allée of mature sycamores and crape myrtles always seemed grander than the brownfield neighborhood it graced, now, the roadway and training center are complements.

Hail to the Redskins. S