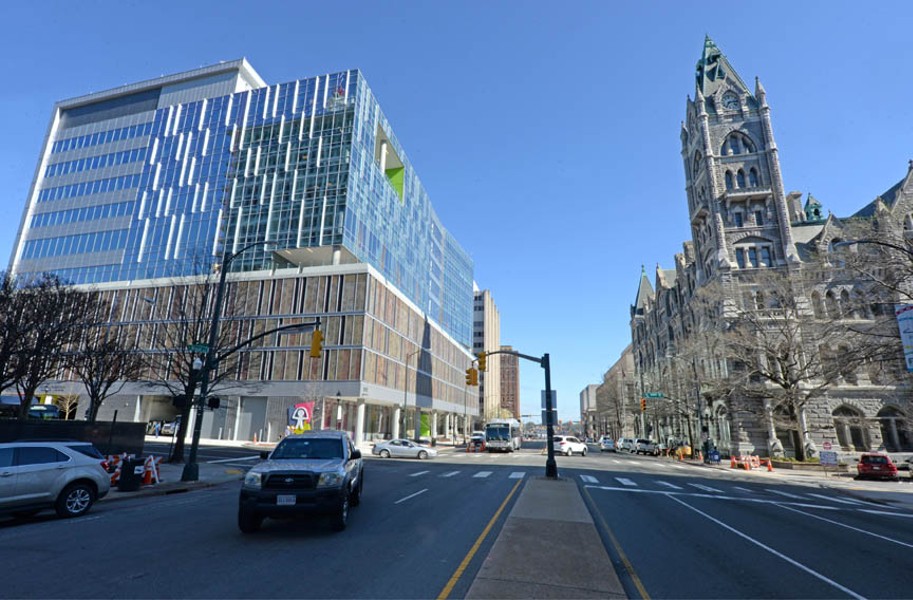 While ports of call such as Venice, Italy, and Key West, Florida, are amenable to cruise ships and day trippers, an intrusive byproduct is the gargantuan vessel itself. At dock, these looming, multilevel, floating cities overwhelm the unique and historical setting their passengers have come great distances to experience.

The thought comes to mind in contemplating the new Children’s Pavilion at the Virginia Commonwealth University Medical Center, which welcomes patients for the first time this week.

The upper section houses the pediatric activities and sits atop the parking block. The form of this glass-sheathed structure suggests a ship’s deckhouse. But unlike a cruise ship, this medical behemoth won’t sail at dusk. It’s anchored to the 1000 block of East Broad Street, and engaged in an awkward architectural discussion with neighboring buildings.

Inside, the Children’s Pavilion consolidates pediatric-related functions that have been scattered about the densely configured VCU medical campus since the university embraced pediatrics in 1973. There are some 80 examination rooms, a handful of out-patient operating areas, research and office spaces and cheerful indoor and outdoor play areas for the young patients.

Combining these functions under one roof is obviously a good thing, and the creation of 600 parking spaces in this landlocked part of town is a big deal. But the concept of placing parking garages downtown on East Broad Street, one of the city’s most important thoroughfares — no matter how attractive or well-disguised — was an urban design principle that was off limits for many years. So we must assume that crowning this parking deck with a children’s medical center was the mitigating factor that trumped urban design.

Including the completion of this project, the architectural character of Broad could be further compromised by at least two more mammoth parking decks being considered for this stretch. The state plans a garage in the 800 block, between Eighth and Ninth streets, and the Dominion Arts Center is studying the feasibility of a deck in the 600 block behind its complex.

While replacing existing surface parking lots with new buildings is generally a good and efficient thing, it comes at a cost.

At the new medical building, the three levels of parking, including more below ground, are disguised with a brownish metal screening that is attractive enough. But when I read the architect’s description, this was intended to evoke trees in a forest. It’s a parking lot, for crying out loud. The same architects offer hooey about how the upper, glass-encased medical tower and its open terraces reflect the James River. Enough already.

The upper stories are encased with clear glass curtain walls with a decided bluish hue, but the parking deck is encased in a warm, brown-hued material. Whoever designed the two parts of the building apparently failed to exchange memos. They clash.

But the most vexing part of the tower design is how the Broad Street facade angles out at the eastern end of the building, apparently to allow for better views of Shockoe Valley and the James from this part of the building. If this structure had been set flush with the parking deck, this annoying flourish would have been unnecessary and allowed the building front to coexist more politely with nearby buildings.

Instead of unnecessary allusions to woods and the river, the architects would have done better to have looked to the immediate surroundings for solid architecture guideposts. There are many, including eight National Historic Landmarks. If they had designed a more sober masonry building with fewer bells and whistles, it could have acted as a foil to such dignified gems as Old City Hall, the General Assembly Building and the medical center’s own Hunton Hall, West Hospital, Monumental Church and the General Assembly Building.

Rather than reinforcing a strong urban wall, an elegant and solid design characteristic of this stretch of East Broad, the pavilion is far too busy — especially situated as it is smack between City Hall and the university’s Sanger Hall, two buildings definitely struck by the ugly stick.

If this new complex maintains an uneasy alliance with its neighbors at the macro level, how does it work at the pedestrian level? Fortunately, some ground-floor frontage on Broad Street will be dedicated to retail, with a Starbucks planned. These spaces will be approached by crossing under a not-unattractive covered arcade that stretches the length of the building.

But to accommodate the 600-car deck, significant entrances and exits had to be placed somewhere, and motor entrance and loading-dock openings that consume most of the 10th and 11th street facades at street level are the result. These stretches have all the charm of even larger ships — aircraft carriers with huge open bays. No degree of sidewalk and pedestrian amenities such as landscaping and street furniture can compensate for sucking the life out of almost two city blocks with driveway openings.

With additional parking-deck projects in the planning along East Broad we might ask whether there are other ways to configure, or other places to build these structures? Could some of the millions of dollars that go toward their construction be shifted to public transit or cycling alternatives? Because if parking garages ultimately negate the dynamic sidewalk and pedestrian experience that most people crave, what’s the point of stimulating downtown development in all its iterations?

The only thing worse than a cruise ship that overwhelms the spirit of a historic and unique place temporarily, is one that is permanently in dock. S