Architecture Review: The Potterfield Memorial Bridge Gets Close to Walking on Water 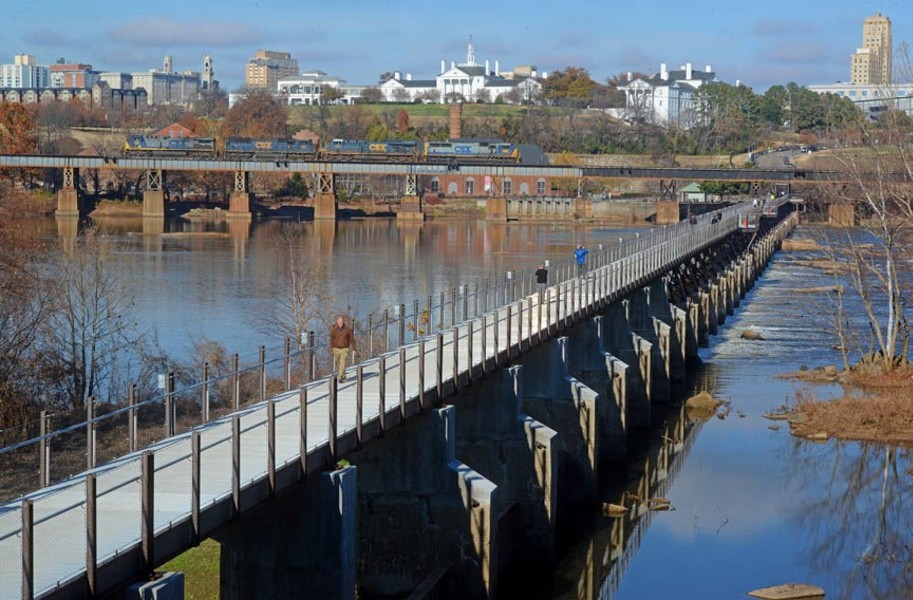 Scott Elmquist The new bridge provides pedestrian connection to the James and offers panoramic views of the skyline, including the NewMarket complex and the towering Central National Bank.

Christmas has come early if you enjoy and respect the history, majesty and development of the James River as it drops gradually from the Piedmont and begins meandering to the Chesapeake Bay.

While thousands of revelers descended on nearby locales for the Grand Illumination and the First Friday art walk on Dec. 2, Mayor Dwight Jones, presided in darkness over a group squeezed onto the 10-foot-wide decking of the T. Tyler Potterfield Memorial Bridge.

They had come for the dedication of the $11.3 million, 1,600-foot-long pedestrian and cycling pathway. It sits atop a former hydroelectric dam, some 20 feet above the raging river, linking pristine Brown’s Island with Manchester, a frayed district undergoing dramatic transformation.

The completion of the highly anticipated bridge represents the latest manifestation from decades of dreaming and scheming by residents, business leaders, planners, developers, preservationists, environmentalists and designers to make the river more accessible.

Although scores of other cities have witnessed similar reclamations of waterways from the industrial sewers they’d become, few places claim Richmond’s rich mix of old manufacturing and hydroelectric plants, railroad trestles, bridges, canal remnants and hundreds of acres of forest all connected by a wild river that’s both welcoming enough for rock hopping and rough enough for audacious kayakers.

While better physical linkage between downtown and Manchester long has been a goal since the two cities were merged in 1910, few could have guessed that a footbridge would be a potential game changer.

Potterfield represents the first element of the current downtown riverfront plan that was developed by the talented and experienced firm of Hargreaves Associates of Cambridge, Massachusetts. Howard Shockey and Sons of Winchester was construction manager.

On a gray and cool Sunday morning after the bridge’s dedication, I approach the span on foot from the south side of the river behind the SunTrust complex on Semmes Avenue. I cross a short bridge above train tracks and a stone-faced climbing wall — remaining infrastructure from the former Richmond and Petersburg Railroad Bridge — and walk along newly poured sidewalks lined with just-planted trees and shrubs. Considerable activity includes folks riding bikes or striding jauntily, some pushing strollers, others attached to dogs.

When you approach the new bridge itself, the roar of the river makes as strong an impact as the considerable visuals of the panoramic downtown skyline.

On the bridge, I’m struck by its unbending, straight form: Its design couldn’t be simpler or more self-assured if it’d been fashioned by a committee of Shakers. Of course, they would have chosen wood. The lack of even the slightest curve or décor respects its underpinnings, an industrial-age relic. This basic concrete foundation is the former Brown’s Island dam that was built around 1900 to serve Virginia Electric and Power Co. Hargreaves added steel supports and aluminum decking with grating in one-inch slats.

The stainless steel and wire mesh fencing has 98 percent opacity, open enough to all but disappear, while strong enough to quell possible vertigo. But the bridge is so close to the water that it may be as close as most mortals will ever come to walking on water.

This is what differentiates the Potterfield from the very few other singularly pedestrian bridges in the United States — an extraordinary close relationship to the water. In Rochester, New York, the dramatic Pont de Rennes Bridge is 90 feet above the gorgelike flow of the Genesee River. In Poughkeepsie, New York, a mile-long pedestrian way across the Hudson River is similarly high.

Nearing the end of Richmond’s 1,600-foot bridge, which is about a third of a mile, it connects with a portion that’s been in place for some time, the “Three Days in April 1865” installation. It recounts with elegant graphic design how the former Capital of the Confederate States of America fell and many of its people fled while fire consumed the city.

Who was T. Tyler Potterfield? He was a senior architectural planner for the city, instrumental in saving the Leigh Street Armory — now the Black History Museum and Cultural Center of Virginia — and the 18th-century Tucker Cottage, both Jackson Ward landmarks. And while his roots were in Pennsylvania, he adored his adopted city.

Reticent by nature, Potterfield threw himself into understanding the culture, people and neighborhoods of Richmond through teaching, lecturing, mentoring and casual conversation. He was an important contributor to “Buildings of Virginia: Tidewater and Piedmont” (Oxford University Press, 2002) and the author of “Nonesuch Place: a History of the Richmond Landscape” (History Press, 2009).

Potterfields’s death at 55 in 2014 was a severe blow to the collective brain reserve of history here when considering the passing of others in recent years who had deep knowledge of the city’s built environment. They include Drew Carneal, Dr. Francis Foster, Charles Peters, James Whiting and Jack Zehmer.

Tyler and I were friends. Late one afternoon, two days before his death, I stopped by his fifth-floor office in City Hall unannounced. He was working intensely at his high desk, the pedestrian bridge design on his computer screen.

He would be humbled, if not in disbelief, of the bridge being named for him. He never sought the limelight. He loved research, sharing his knowledge, riding his bicycle though old neighborhoods and discovering Richmond‘s secrets. Every Christmas, he enjoyed the simple ritual of tromping through the woods in search of a Virginia cedar tree to chop down.

But the first thing he’d do after getting out of the truck was snap a sprig of holly and stick it into the band of his wide-brimmed hat, as if to connect with nature.

Potterfield knew that this footbridge would connect people with nature. Sadly, he never lived to see how effectively and magnificently it would do so. S