Scott Elmquist Prior to its Sept. 17 opening, staff ready to work the airy lobby of Quirk Hotel, a 1916 structure whose classical lines have been updated with white paint and midcentury modern furnishings.

Two evenings before its Sept. 17 opening, Quirk was abuzz with friends and associates of newly minted hoteliers Katie and Ted Ukrop. They came to preview downtown’s latest attraction, one melding two landmarks.

For almost a century, the former J.B. Mosby Dry Goods building has anchored the southwest corner of West Broad and North Jefferson streets. And for a decade, the pioneering and picturesque Quirk Gallery, at 311 W. Broad St., has been a shopping destination in the city’s arts and cultural district. The two have been melded into a hybrid concept that’s equal parts boutique inn and contemporary art gallery.

If the pre-opening scene is a harbinger, Quirk promises to deliver lively experiences. While guests sipped craft beer, wine and fizzy water, among those spotted examining the spaces are two local arbiters of taste: Deborah Valentine, who once had a design shop of her own on West Broad, and Pamela Reynolds. In the airy and freshly painted hotel lobby, Richmond artist Nickolai Walko explains his anatomically precise works to a clutch of intrigued listeners.

Nearby, Katie Ukrop discusses how artist Susie Ganch, who teaches at Virginia Commonwealth University, created a large hanging piece composed of plastic coffee lids and installed it herself above the coffee bar. Ignatius, the Petersburg-based hat designer, basks in the attention that his striking blond associate, Jaima McReynolds, receives from casually modeling a straw bird’s nest of a fascinator, which she balances jauntily on the side of her head.

Overlooking the scene is Jim Ukrop, Ted’s father and a tireless champion of downtown redevelopment. He muses how things have changed in the neighborhood since his days at John Marshall High School, before it was torn down in the early ’60s to make way for a courts building. “We hated coming downtown back in those days,” he says. 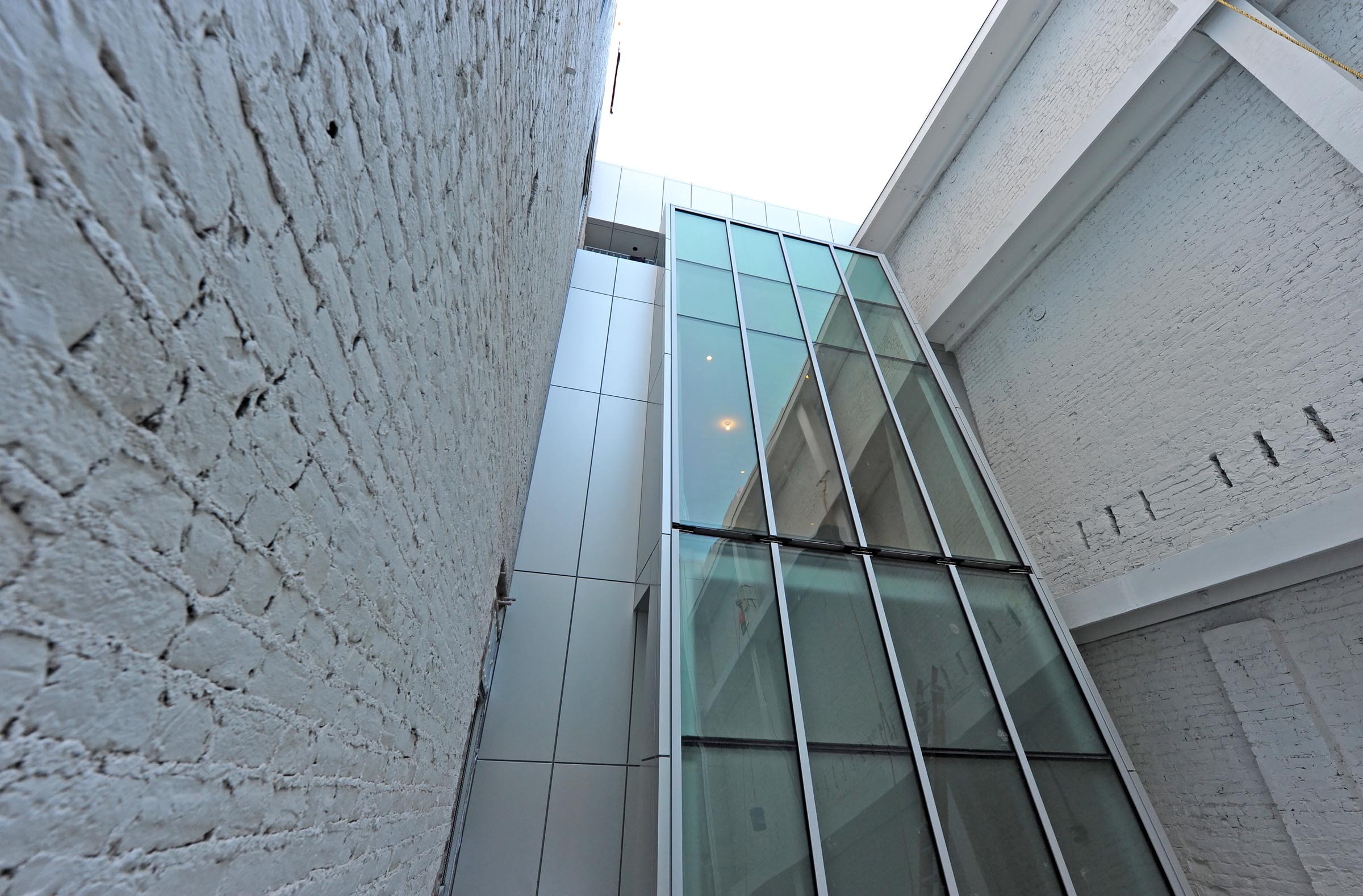 The six-story building, which now contains 75 hotel rooms, began life in 1916 as an upscale department store. It was designed by Starrett & Van Vleck, a New York architecture firm that was coming off its successful design of the Fifth Avenue flagship for Lord & Taylor. What a critic once wrote about another of the firm’s designs, for Saks Fifth Avenue, would hold true for the Mosby dry goods store: “Its facade reeks of style rather than stylishness.”

On the street and second floors, faced in stone, an Italian renaissance colonnade has three arched bays facing Broad Street and seven fronting Jefferson. Capping the next five floors, all faced in brick, is the exterior’s crowning glory, a grand palazzo cornice.
For the reset, 3north Architects was the architect, Poesis Design worked on the interiors and W. M. Jordan Co. was general contractor.

Upon entering the building from either Broad or Jefferson streets, visitors experience a vast, double height lobby and dining space, which is broken up by two rows of Corinthian columns. These supports, as well as walls and the vaulted ceiling, are painted the same shade of a soft white, which reinforces the gallery intentions of the complex.

The unobtrusive registration desk facing Broad Street is separated from the rest of the room, however, by a shelflike lattice structure that looks strangely unresolved. At the far end of the room, below the mezzanine, a bar extends across the room. Nearby is the Maple & Pine restaurant. Furnishings throughout the lobby and dining areas are subdued and have a midcentury modern vibe. It is the room’s volume that’s being accentuated and celebrated.

There are traces of the antique: An open, wrought-iron stairway has been painted glossy black and takes on a sculptural presence. Wooden vestibules at the main entrances are built of dark wood. New lobby signs, in a sans-serif type, suggests the 1930s. It is simple and perfect.

Next door and accessible from the lobby, is the relocated Quirk gallery. It occupies a once somber, three-story retail structure built around 1903. In the project’s boldest move architecturally, this building’s center has been blown out to create a roofless atrium. Large, plate glass walls now face Broad Street as well as the rear of the gallery to establish see-through openness. The space behind the atrium is accessible through the hotel and contains the kitchen and function spaces.

Unlike too many adaptive reuse projects, where little original fabric remains inside, the hotel rooms feel unusually expansive. Original, high-ceiling heights are maintained. Along walls with existing windows, high, built-in platforms allow guests to step up and peer out: It’s a nice but necessary touch. And rooms facing west have newly punched-out window openings with solid panes of glass that offer wonderful urban views.

Old floors throughout the guest levels are either maple or oak, refinished and sealed with lightly applied white paint. The bedposts are fashioned from repurposed wood from the site and treated with a similar whitewash. Bottom line: At Quirk, guests won’t be enveloped cocoonlike, as in many luxury hotels. The rooms are allowed to breathe.

Bathrooms are minimalist but elegant with simple white fixtures and clear glass shower partitions that are, well, sexy.

As one might expect, in all guest rooms original, largely abstract artworks hang on the white- or barely pink-hued walls.

The chic new Quirk and the glorious Jefferson Hotel are within a few blocks of each other. With time, Jefferson Street should become an axis of Southern hospitality that will lure hotel guests in both directions to discover the delights each has to offer: Old-World charm, New-World vibe in Richmond’s downtown. S