Alan Karchmer/NNAMHC The new National Museum of African-American History and Culture, designed by David Adage and adjacent to the Washington Monument, adds bold contemporary flair to the National Mall.

Washington — Eyes will turn to this city later this month with the inauguration of the most unpredictable president in recent history.

The Capitol, at one end of the National Mall, will loom in its classical architectural glory over the swearing-in ceremony before the four-year clock begins to tick.

At the opposite end of the Mall, habitués and tourists alike will be getting used to another outlier, one of the architectural sort — the National Museum of African-American History and Culture.

Unlike the architecturally impressive to mundane lineup of white-marble-clad museums — beginning with the National Gallery of Art, continuing with the Museum of Natural History and ending with the Smithsonian Museum of American History — the new museum is covered in rust-colored aluminum grillwork that suggests material lightness and cagelike containment.

It’s also aggressively and refreshingly contemporary. British architect David Adjaye, who was born in Tanzania, intended for the unusual shape to reflect a three-tiered Yoruban crown. Some observers have been reminded of carved posts on the verandas for Yoruban courts or praying hands. Regardless, like much ambitious architecture, it will be praised and criticized in equal measure. But it won’t be overlooked.

This is an ambitious museum with a difficult, if thrilling story to impart. Visitors should allow at least a full day to experience a thoughtful, organized, poignant, exuberant and, in this telling, uplifting narrative of the black story.

The $540 million building is a behemoth containing 400,000 square feet and five exhibition levels. Visitors enter on the south side, which faces the Washington Monument near 14th Street and Constitution Avenue.

The exterior gathering place is made pleasant by being sheltered by a long and broad concrete canopy that appears to float along this entire side of the museum. A large reflecting pool contributes to a sense of tranquility before you enter the galleries to contemplate one of the most difficult and sensitive history lessons that any American museum has been charged with teaching.

If the building’s exterior is dramatically sculptural, textured and richly hued as it reflects the changing light, the lobby is stark. There are broad expanses of dark flooring, no décor and few signs. For those with inquiries or seeking directions, a long slab of a front desk is manned with pleasant museum employees and volunteers to answer questions.

Primarily the lobby is an organizational divide between the two very different sections of the museum. Visitors may take an escalator or elevator down three levels to follow the chronological story that begins in the 1500s of Africans in the New World with the international slave trade. The story concludes under a billboard-sized celebratory photo of President Barack Obama being sworn in.

Between these bookends, museumgoers follow up ramps that cover the period of emancipation, Reconstruction, Jim Crow, segregation and the civil rights movement.

The museum collection has 40,000 objects, and some 3,600 are currently on display. The objects include a number of gifts and loans from Richmond organizations. A bentwood chair that once graced the sanctuary of Jackson Ward’s Sixth Mount Zion Church contributes to the story of how religious faith has continually sustained a repressed people.

In addition to objects, well-executed graphics and charts illuminate facts. One exhibit lists the names of 2,200 people who were lynched from 1882 to 1930. Missing is any real mention of the late-20th-century AIDS crisis, which disproportionately affected black Americans. I also see no reference to the Richmond-born L. Douglas Wilder, the nation’s first elected black governor. 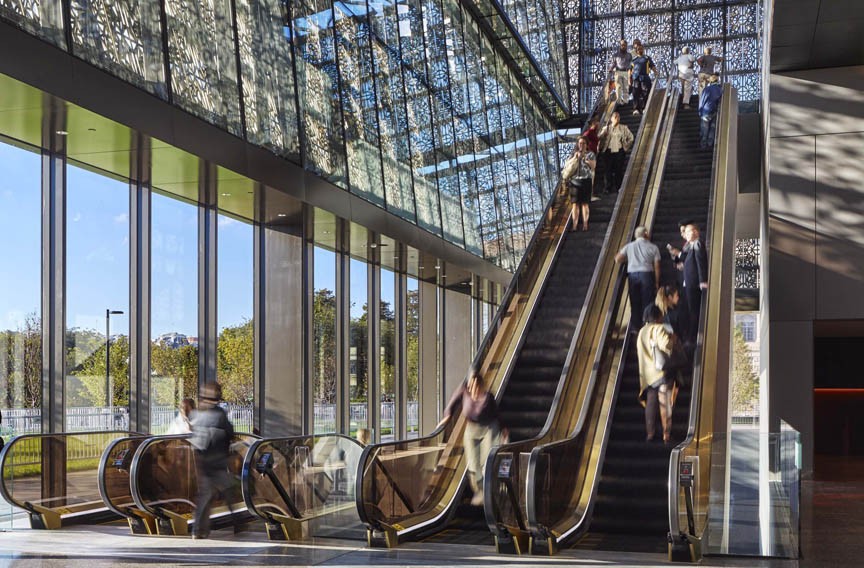 After ascending from 70 feet below ground, museumgoers may return to the entrance level to make their way to the two upper exhibition floors, both above ground. Exhibits on these floors are unabashedly celebratory. We encounter objects on loan from the Maggie Walker House in Jackson Ward, telling an audience beyond Richmond of a remarkable civic leader, educator and businesswoman. We meet John Mitchell, the tireless journalist who spoke truth to power through his newspaper, The Richmond Planet. And in the gallery that celebrates trailblazing athletes, a prime spot is given to another Richmond native son, Arthur Ashe.

Of course, the local notables are woven into the overall dense and sometimes crowded displays so you’ll have to look to find them. The galleries featuring achievements in music, cinema and theater are colorful, joyous and fun. And at strategic spots, expansive glass windows allow views of Washington landmarks.

In development for 13 years, the National Museum of African-American History and Culture was conceived during the George W. Bush administration and shepherded to completion during the Obama years. Come Jan. 20, with a new president and Congress and an evolving judiciary, the rocky and sometimes reassuring American narrative continues.

In Richmond, with the Black History Museum and Cultural Center of Virginia getting its footing, and the interpretation of the history of Shockoe Bottom atop the agenda of a new mayor and City Council, every engaged Richmonder should make a pilgrimage to the nation‘s capital to absorb this ambitious and magnificent take on America’s unfolding story. S