Scott Elmquist Broad Street, Adams Street and Brook Road create a triangle that should be exploited in the site plan of the Maggie Walker memorial.

For a town that purports to love monuments, why is it like pulling teeth to get one designed and installed? It’s especially vexing when the person being memorialized is Maggie L. Walker, revered as among the enlightened and effective personages in Richmond’s long history.

For months, the city’s Public Art Commission has conscientiously sponsored carefully choreographed and well-attended hearings. They’ve featured such wide-ranging speakers as Lisa Freiman, director of the Institute for Contemporary Art and Walker’s descendants, including great-grandson Johnny Mickens III. Alums of Maggie Walker High School show up regularly in well-worn Green Dragon letter jackets. And despite well-meaning arguments over site selection and the fate of a particular live oak tree, debate has been thoughtful and respectful.

Scores of folks sifted expectantly through downtown’s Richmond Public Library on Saturday, Feb. 20. They were there to view sculptor Antonio Tobias Mendez’s preliminary statue design and schematic plans by the VHB design firm for the prominent, triangular site where Brook Road and West Broad and Adams streets intersect.

What they found were underwhelming concepts. The overall landscape site plan fails to celebrate the unique physical characteristics of its historic Jackson Ward intersection. The sculptor’s rendering of Walker, the project’s centerpiece, generates the emotion of a generic sports trophy.

To create optimum public space, the site plan calls for closing a short stretch of Brook Road that for 200 years has sliced the northeast corner of Adams and Broad streets at a 45-degree angle. From a historical perspective, this is where the tightly configured, 90-degree city grid connected with Brook Avenue and continued northward along the Brook Turnpike, once the main road out of town. There are few spots where Richmond’s past reveals itself so geometrically. If Richmond were Rome, or any of a number of ancient cities, this connecting tissue wouldn’t only be retained, but also celebrated with an elaborate gateway or heroic arch.

Inexplicably, because maintaining the street bed is one of two things the public has asked retain, this stretch of Brook disappears. Keeping the live oak is the other thing some advocated, but the tree appears destined for the wood chopper. 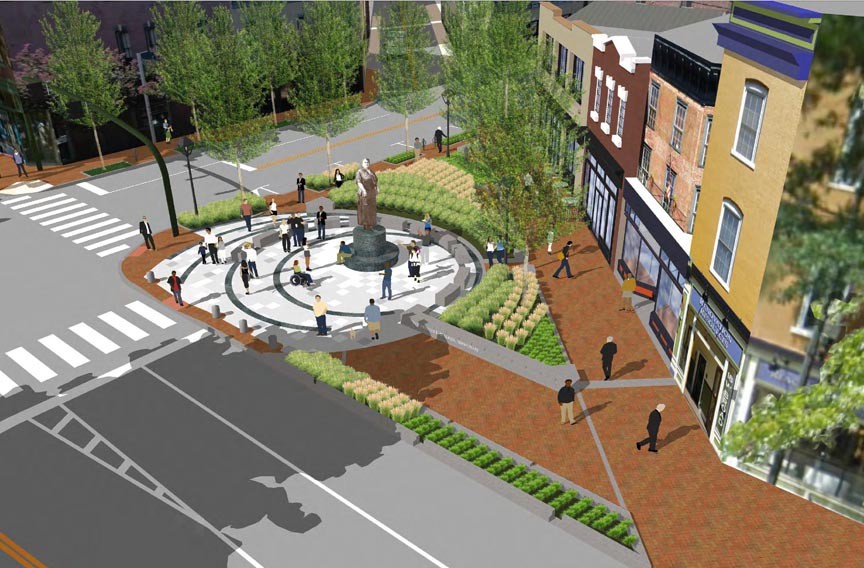 Maintaining Brook’s roadbed is simple enough to work into the design. The stretch could be closed to vehicular traffic and curbs eliminated or softened without losing the full power of the dramatic angle. The roadbed thus would add to this plaza a more open and usable space. Colorful cafe furniture might be placed here, where visitors could enjoy refreshments, reading, conversing and, of course, contemplating the Walker statue. A similar amenity in New York’s Times Square, red tables and chairs, is a raging success.

The Walker plaza site plan also shows numerous shade trees and planting beds filled with grasses. The triangular plat is too small for this much permanent landscaping. It’s better left as a hard, paved space. And because there are few open spaces along increasingly active West Broad and North Adams streets, the more flexible the space, the better. Handsome pavement, reflecting the dramatic diagonal of Brook Avenue, would create an elegant and useful, urban plaza. Besides, trees would obscure the Walker statue: Isn’t the point of placing it here to attract attention of passersby in vehicles as well as pedestrians?

Broad Street doesn’t need more trees. The pin oaks looming over century-old buildings, which litter the streets with acorns and dead leaves, were planted in the 1970s. It was a well-intended attempt to soften a then-desolate stretch of vacant storefronts. But the trees have outlived their usefulness. Let’s start by eliminating trees in front of Virginia Repertory’s November Theatre to better reveal the exuberant classical temple front.

The Walker monument site plan sets the proposed statue inside a circular plaza with paved concentric circles. Because the site shouts triangle, this strong element shouldn’t be ignored and replaced with something else.

As for the Walker statue, Mendez’s design depicted a bronze, statuesque woman, an image taken from a well-known photograph. She’s standing and wears a dress whose long skirt exposes her ankles. Assuming this is what the artist has in mind for the finished work, it’s problematic. The statute is too larger-than-life and sits on a high, drumlike pedestal. At close range the viewer’s gaze would hit Walker’s feet and ankles — hardly appropriate for those “olden days” when “a glimpse of stocking was looked on as something shocking,” to quote a Walker contemporary, songwriter Cole Porter.

Walker should not stand atop a high pedestal but be more eye-to-eye with visitors. This approach works well at the Virginia Civil Rights monument in Capitol Square. Mere mortals can better relate to the greats when the latter are brought down to earth. 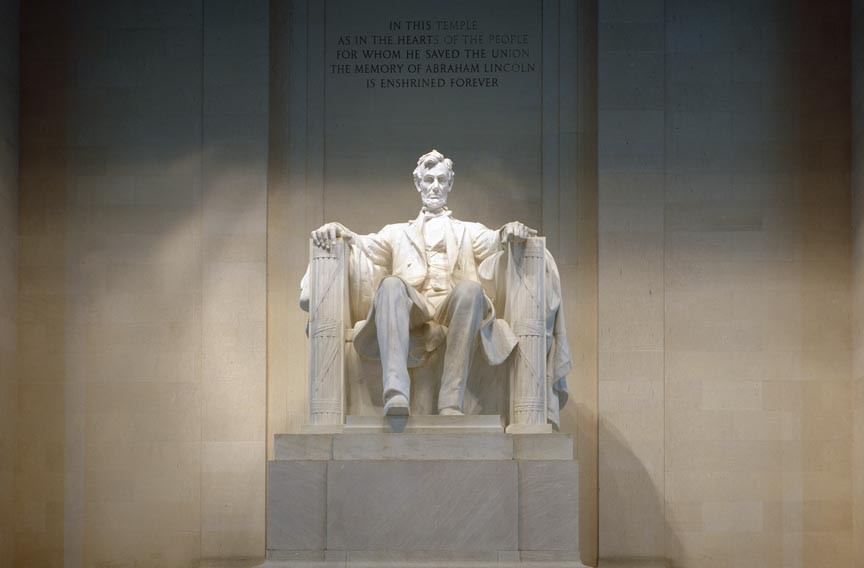 And because Walker was confined to a wheelchair, why not depict her seated and in a conversational mode? The leading civil rights leaders of her time and others beat a path to her home on Leigh Street seeking her wisdom, so why not show her in a reflective, communicative stance?

Some of the most beloved and successful statues depict their subjects seated, including Abraham Lincoln and Franklin D. Roosevelt at their respective memorials in Washington, and “Alma Mater” which sits on the library steps of Columbia University in New York.

While it would be untoward for teenagers and adults to enter the bronze Walker’s personal space, I can picture toddlers and little children crawling onto her lap for photos. Now that would be an inspiring image worth sending friends and relatives. S