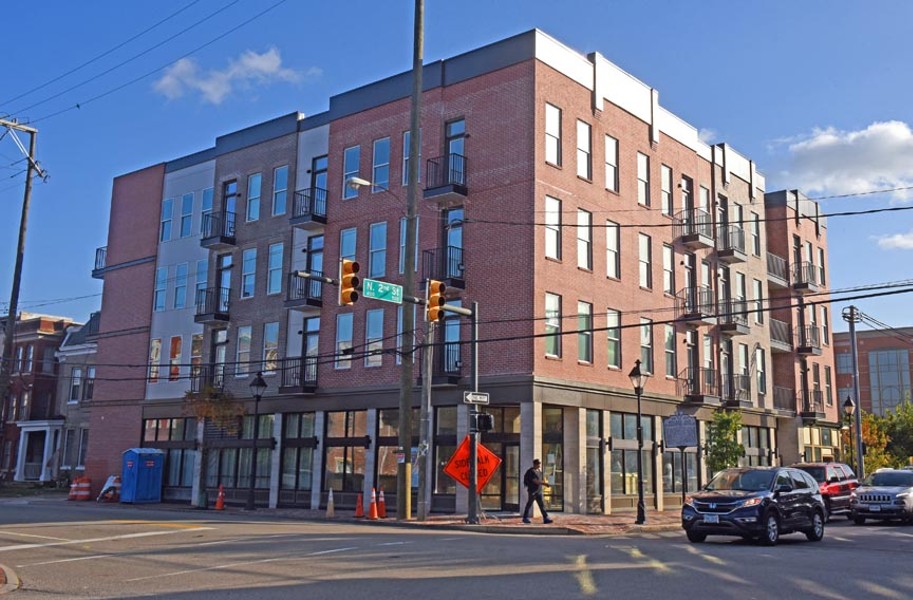 Scott Elmquist Eggleston Plaza, at Second and Leigh streets, combines a variety of uses, including affordable housing, with architectural sensitivity.

The Maggie Lena Walker monument, dedicated this summer at West Broad and North Adams streets, instantly became a dynamic presence in the cityscape.

A steady stream of pilgrims visits the memorial to an early 20th century visionary civic leader, newspaperwoman and entrepreneur. And the triangular park has provided something sponsors and planners didn’t necessarily envision: It has become a touchstone and rallying place for civic activism. On Saturday, Sept. 16, hundreds of people assembled beneath Walker’s matronly bronze form to stride toward another monument — to Gen. Robert E. Lee — that has anchored Monument and Allen avenues for 127 years, to confront those protesting the possible loss of Confederate monuments.

With considerably less fanfare, another important Jackson Ward intersection, at Second and Leigh streets, was renewed this summer. Half a block from Walker’s Leigh Street home, Eggleston Plaza, a mixed-use, four-story complex was completed.

In addition to ground floor office and retail spaces, the complex has 31 apartments. The latter are considered affordable housing. Residents can earn no more than 60 percent of the median income ($32,500 for an individual and $34,800 for a couple). This is noteworthy at a time when Richmond is undergoing aggressive gentrification — and a resulting rise in house prices and rents — in almost every quarter of the city.

Eggleston Plaza, melding politely and attractively with its site, was designed by Walter Parks Architects. It is a conservative building, with few of the exterior surface flourishes of which the firm proved capable in some of its infill residential buildings in Shockoe Bottom. The Eggleston exterior is of closer kin to Parks-designed complexes in Jackson Ward as well as in Manchester, Scotts Addition and Church Hill, where bowing to existing historic fabric required a tapping of the brakes architecturally.

The $6 million Eggleston project tightly fills its corner site as well as embraces an adjacent 1906 townhouse that has been restored in the middle of the 500 block of Second.

The mass of the new structure is divided into three asymmetrical bays that project slightly beyond two recessed ones. These well-devised divisions reflect the scale, rhythm and architectural variety of Jackson Ward that is characterized by an intriguing mix of townhouses and converted warehouse and commercial buildings. Two of the bays are faced in red brick, the center bay in brown blocks. Romeo-and-Juliet balconies punctuate the outer walls on both the Second and Leigh facades. (Note to future architectural historians and aficionados: When you ask when and why these stunted balconies — too small for even lawn chairs — began appearing on Richmond buildings, the answer is that they date from when it became verboten, socially and environmentally, to smoke indoors.)

Tightly configured Eggleston Plaza does everything so well. It establishes a much-needed urban wall in a district that has too many surface parking lots. It respects the scale of surrounding structures. It provides commercial activity on the sidewalk and has limited parking tucked behind the building. So much is done so well there was little need for the overachieving entablature that runs along the roofline. It is just short of cloying: Less is decidedly more when it comes to mimicking the décor, craftsmanship and proportion of a bygone era. Walter Parks got this detail spot-on by being more minimalist in another of its infill residential projects, the Iron House Place apartments at 1333 W. Broad St.

Eggleston Plaza takes its name from the former Eggleston Hotel that occupied the site from the late 1930s to 2009. That three-story building exuded considerable vernacular interest with Perma-stone-encased outer walls and metal fire escapes that hung from the exterior like tinsel garlands on a Christmas tree. Sadly, it was demolished, having partially collapsed from neglect. Losing this landmark, where such legends of sports and entertainment as Joe Lewis, Duke Ellington and Count Basie stayed, was tragic and probably could have been avoided. Too many sites with echoes of African-American history have been lost in Jackson Ward including Maggie Walker’s Penny Savings Bank and the office of remarkable John Mitchell, the editor of the Richmond Planet, who spoke truth to power during the Jim Crow era.

Fortunately, a state historical marker now planted in front of Eggleston Plaza as well as the rejuvenated Hippodrome Theatre directly across Second Street, offer welcome context near an intersection that has witnessed amazing episodes in our evolving story. S