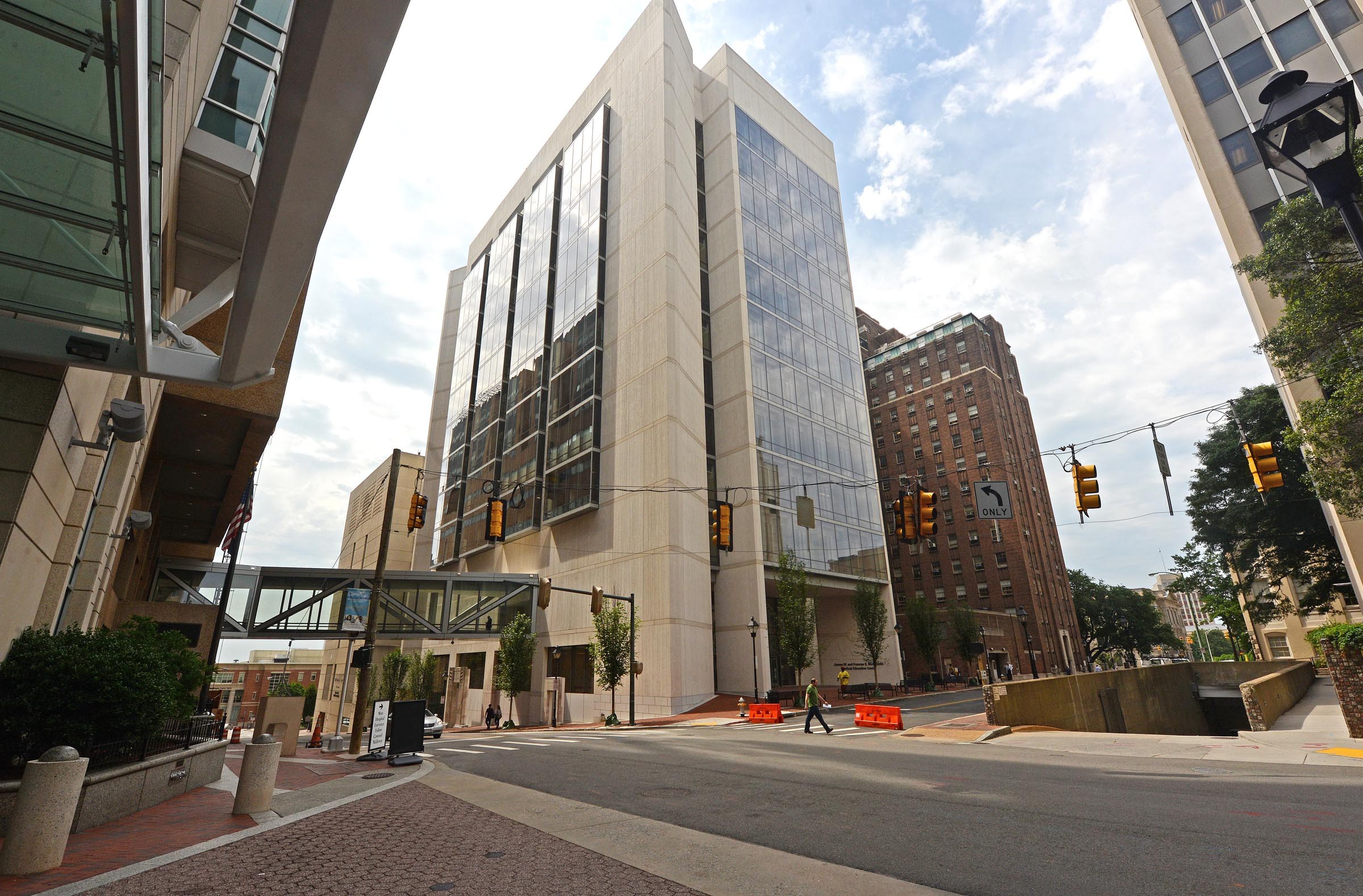 So accuse me of name-dropping, but few American places can claim so impressive an architectural patrimony as the vicinity of East Broad and 12th streets.

Foremost, there's Thomas Jefferson's State Capitol, currently starring in the PBS documentary "Ten Buildings that Changed America." Next door is the Executive Mansion, which at 200 years old is experiencing its own version of "Upstairs, Downstairs," featuring its current occupants and a former chef. The mansion was designed by Alexander Parris, a major Boston talent.

Over on the north side of Broad, there's Hunton Hall, formerly First Baptist Church, which was designed by Thomas U. Walter, architect of the U.S. Capitol. Virginia Commonwealth University has seamlessly repurposed it as a student commons. Just a block down East Broad is the Monumental Church, designed by the country's first professional architect, Robert Mills, who gave us the obelisk Washington Monument.

Among the other architectural showstoppers nearby are the mesmerizing Egyptian Building, designed by Philadelphian Thomas Stewart, and the zigguratlike West Hospital, an art deco masterwork by Richmond's Baskervill & Son.

Recently, a jewel by a 21st-century starchitect has been set comfortably into this architectural diadem. It's a crystallinelike high rise, the James W. and Frances C. McGlothlin Medical Education Center at the VCU School of Medicine.

Designed by the internationally prominent firm of Pei, Cobb, Freed and Partners of New York, the 200,000-square-foot building with 12 floors injects needed vitality to the previously dour, overbuilt and architecturally underwhelming medical camous at 12th and Marshall streets. And it provides a surprising complement to its immediate neighbor to the south, the stolid, red-brick West Hospital. This architectural pairing looks great.

McGlothlin Hall occupies the site where the A.D. Williams Clinic once stood, a smaller version of West Hospital. Its red brick solidity has been replaced by a restrained but assured and exquisitely crafted building that combines poured-in-place concrete, granite and glass — lots of beautiful and clear glass — to create a facade so light that it appears to float.

It seems miraculous that there was enough space to build a structure of this size on the site, especially because on both the front, 12th Street side, and along Marshall Street, the architect chose not to push the building tight to the property line but set it back about 10 feet. This placement enhances the sense of presence and creates a subtle piazza on 12th that's shaded by four mature trees.

To enhance the experience of entering the building from 12th Street, flanking, two-story concrete walls are set at roughly 45-degree angles to direct pedestrian flow through two revolving doors and into the light-filled, two-story lobby.

It would be unfair to accuse the firm, which was founded in 1955 by Chinese-born, Pritzker Prize recipient Ieoh Ming Pei (born in 1913) of having a signature style, but it's undeniable that the firm enjoys employing sharp, 45-degree angles in its work. Its East Building of the National Gallery of Art in Washington, and the pyramid at the Louvre in Paris are nothing if not angular.

At this first Richmond commission, angles are put to good use for directional purposes. At a secondary entrance to McGlothlin Hall, at the northeast corner of the building, a smaller angled wall directs pedestrians inside.

Upon entering the main lobby you confront a prominent donor wall. But above this is a special visual treat: a 70-foot-long mural fashioned in the 1930s and '40s by George Murrill, a Yale-educated artist. He received the commission from George Sanger, president of the Medical College of Virginia, during a period of dramatic and physical expansion, to illustrate the history of the medical school. The Egyptian building, the West Hospital and Sanger himself are featured. This frieze, which hung in the now-demolished Williams Clinic, was restored, and re-hung in this prominent space. It's also heartening that the dean of the school of medicine, Dr. Jerome Strauss, has continued Sanger's commitment to the arts by placing contemporary works by VCU-related artists in public places throughout the building.

Standing in the main lobby, your eye leads to an angled passageway that slices the building and leads to a Marshall Street entry: It suggests the building has evaporated. But the lobby's spiral staircase (sleek and jazzy-looking, as if a set from the version of "The Great Gatsby" playing in theaters) and elevators lead to the upper floors. Here are designated areas for cancer research and, in a program the university is touting as innovative, simulation classrooms.

By their nature, these research and educational spaces are off-limits to the public. But that doesn't mean that even so task-specific areas has to be off-putting. On each of the five upper floors I toured, almost all of the spaces, whatever their use, is within range of an exterior window. On higher floors, lounges have dramatic views of the downtown skyline.

For half a century Pei, Freed, Cobb and partners has built a reputation for responding to luxury commissions such as the John Hancock Building and the John F. Kennedy Presidential Library in Boston, and a new art museum in Dobu, Qatar, with dramatic angles, exquisite craftsmanship and sharp detailing through the guise of unapologetic modernism. It's exciting that the firm has delivered equal design excellence to a public university campus. S