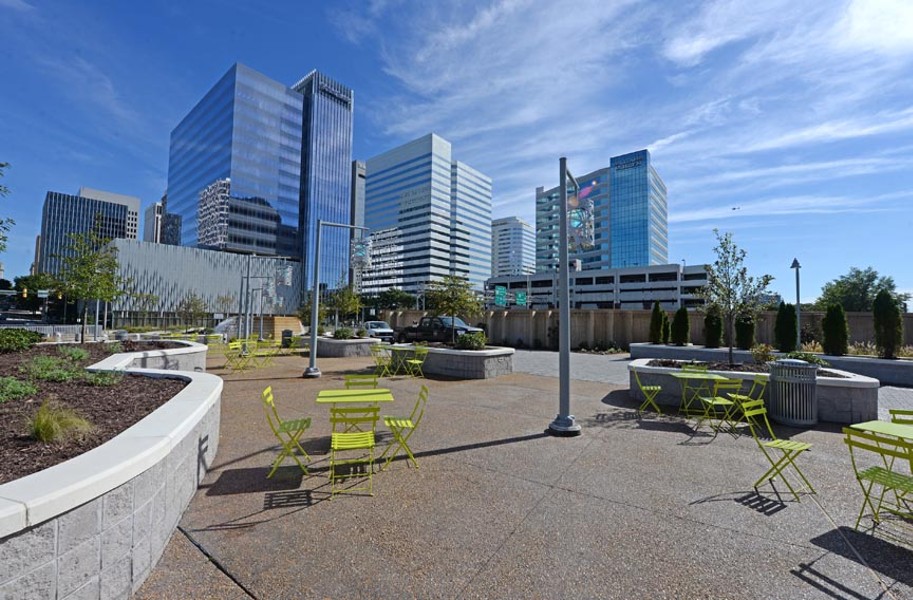 Parks atop highways are no novelty.

In Boston, the linear Rose Fitzgerald Greenway, famously known as an element of the Big Dig interstate rerouting, sits atop the John Fitzgerald Expressway and serves six downtown neighborhoods.

Washingtonians know that the 12th Street tunnel under the National Mall is a shortcut to Constitution Avenue or an escape route at evening rush hour. Across town, DuPont Circle sits atop a WPA-era road.

Those parks are popular urban green spaces because they’re situated in populated and well-established neighborhoods with foot traffic.

Richmond too, has a downtown park atop a highway — Kanawha Plaza. For two generations it has disguised the Downtown Expressway for the two blocks defined by Seventh, Ninth, Canal and Byrd streets. Trouble is, Kanawha Plaza was built when this part of town was a no-man’s land with few buildings to generate park goers.

Truth to tell, it’s a Band-Aid.

The park owes its existence to Federal Reserve Bank of Richmond officials, who were miffed in the 1970s when they realized a recessed Downtown Expressway would pass by their main entrance on Byrd Street.

The bank had recently made the decision, then a bold one, to build its headquarters along the James River. It assumed that eventually the vacant lots and surface parking lots south of Cary would be filled with buildings. But the expressway not only cut the Fed off from the financial district, it also destroyed a key stretch of the historic James River and Kanawha Canal.

The landscape architecture firm hired to bridge the divide with Kanawha Plaza was Zion & Breen of Boston. The designers realized from the outset that the park-atop-the-expressway would be isolated, with only the Fed and parking decks nearby. Smartly, they built a self-contained environment. The grounds were raised a few steps higher than the surrounding sidewalks and the park perimeter was planted with a generous number of shade trees to buffer the vehicular traffic that rolls past each day.

At the east and west ends of the park, high poured-concrete walls were built to minimalize sounds from the expressway. These walls were softened by pergolas covered with vines. Against the walls, wooden benches and partitions were placed so visitors had a modicum of escape within so public a place. There also was an open lawn and brick walkways. But the park’s glory was its sculptural fountain with water cascading down a concrete ziggurat.

In 30 years the blocks around Kanawha Plaza began to be filled. The James Center, Riverfront Plaza, the Crowne Plaza, Dominion Resources, Williams Mullen, WestRock and the Gateway Plaza provided welcome company to the Federal Reserve.

But Kanawha Plaza was underused, to say the least. This was partly because of how the corporate buildings were built — self-contained enclaves with interior parking and amenities. They discourage pedestrian activity.

It also didn’t help that after 9/11, the Federal Reserve got a high-security makeover with boulders, high metal fencing and guard stations that restricted comings and goings on the park side of the building.

The surrounding streets also made pedestrian crossing unpleasant: The roads are designed to sweep cars onto the expressway or Manchester Bridge, foot traffic be damned.

Because the park became isolated, it provided a haven for homeless people. And benign neglect was the unofficial maintenance policy. When the recent UCI Road World Championship event was announced for Richmond, the park was closed and fenced off.

The architecture firm of KEI has eliminated most traces of the former infrastructure and brutal design, save for the fountain — which has received a much-needed cleaning. The high concrete walls still screen the sights and sounds of the highway, but the pergolas and benches are gone.

The new park is considerably more open with a large oval lawn. Saplings have been planted along the fringes of the park. Instead of the former stairways that marked park entrances, welcoming curved ramps and walkways, paved in aggregate stone, lead into the park. There also are designated areas for vehicle access and port-a-potties, with plans calling for the park to be more regularly programmed with entertainment and refreshment options. Colorful and movable tables and chairs add a humanizing touch.

The one jarring design factor is the choice of textured cinder block as the building material for the considerable stretches of curved retaining walls. The material isn’t in line with this upscale part of town. Not only that, the blocks have been cut in too many sizes and shapes — whatever configurations make the turns of the retaining walls. Knowing that organic lines were the overriding design concept — perhaps to contrast with the park’s former hard-edged right angles — another, more flexible material should have been chosen.

A good time to visit the park is at dusk. At the witching hour, lights come on in the high-rises and create a shimmering and glowing urban wall. Inside the park, new light standards have glasslike coverings in shades of blue that hang from posts like oversized pieces of costume jewelry.

They have built it. Time will tell if this generation of downtown habitués come. S